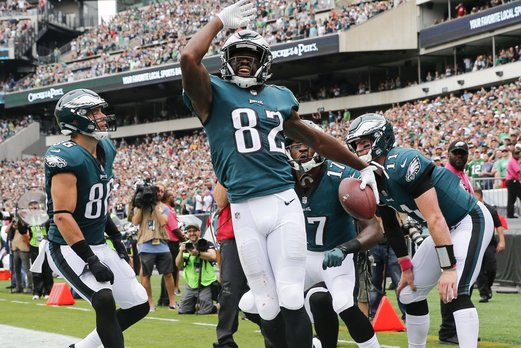 The franchise quarterback was shining bright on a rainy Sunday afternoon in Philadelphia.

Carson Wentz led the Eagles to a convincing 34-7 thrashing of the Arizona Cardinals, completing 21 of 30 passes for 304 yards, and a career-high four touchdowns.

Wentz was brilliant. His throws were on the money most of the day, and continued to show improvement on his deep ball, connecting with Torrey Smith and Nelson Agholor for 59 and 72-yard touchdown bombs.

The best part of Wentz’s game? Third down efficiency.

The offense went 9/14 in third down situations today, good for a 64% conversion rate. The Cardinals, who have a pretty strong secondary, had no answers for Wentz and the Eagles’ offensive attack.

Wentz was 10 of 11 for 207 yards three touchdowns during the first three quarters today. For the year, he has a 138.3 rating on third downs. Those are elite numbers right there. He spread the ball around to eight different receivers today.

All phases of the Eagles’ game were working at full efficiency today.

The defense kept Carson Palmer and the Arizona offense in check throughout the entire game, giving up just seven points.

The Cardinals have no running game to speak of, and the Eagles didn’t let them pick up any momentum today, giving up just 33 yards on 14 carries.

The secondary held up great against Palmer as well. Infamous Eagle-killer Larry Fitzgerald was held to just six catches for 51 yards, most of which came during garbage time, and Palmer’s other speedy deep threats didn’t accomplish much either.

Truth be told, Palmer could have easily thrown two or three interceptions today. Patrick Robinson and Jalen Mills were in position to make plays multiple times, but just couldn’t come down with the ball.

Oh, and the Dallas Cowboys imploded against the Green Bay Packers, and the New York Giants sank to a bitter 0-5 and lost Odell Beckham in the process.

The Eagles are in sole possession of first place, and their lead is growing.

When you look at this Eagles team, there aren’t a lot of apparent weaknesses. The offense has been efficient, and is still far from a finished product. The defense, even in the secondary, has been more than serviceable as well.

There’s a lot of credit to go around right now.

Credit Doug Pederson for calling a great game, and having these guys ready to play each week.

Credit the players for buying-in and executing.

The team is very much trending upwards, only needing three more wins to match their entire total from last season. Thursday night against the Carolina Panthers is a great test for this team, and how far they’ve come.

Djax once did the Nestea Plunge into the endzone and was flagged for unsportsmanlike conduct, with the new rules Agholor was able to do the same fall into endzone flag free for 6 pts.

I understand the main reason for the 4-1 record is attributed to the entire organization, however,im starting to see this squads transformation, as it has taken on the personality of its leadership. Wentzilla is now playing with a maturity that belies his 21 st professional start..kudos to his coach.All 3 phases of the team are playing at a very high level..Gone are the mindless penalties and missed assignments..i know we are accused of being negadelphia…well posidelphia has held us all captive..never been more content ..

Agholor’s touchdown was like a 3rd and 19 or something absurdly long after a holding penalty on Blount for like 60 yards.

We have a solid , yet imperfect team. The next man up, young secondary is impressive…, the OL much to the chagrin of the negative nitwits is a strength. Wentz is as advertised…. yet again, I put myself in the owner of the browns seat and wonder how a weekly meeting with my G.m and coach staff would be after they conspired to rape the eagles (who according to you guys mortgaged the future) … I think I’d fire a few folks

The Eagles are clearly an ascending team with their second year HC and QB. All 3 phases of the team played well today and the play calling by both OC/HC and DC was very good. The players executed the plays.
Wentz put on an elite performance today, his first 4 TD day of his young career. Happy Howie mortgaged the future for him (lol).
Nice to see Torey Smith catch the deep ball and run it in for a TD.
Nelson Agholor, that’s what a first round WR looks like, awesome catch and TD run.
LeGarette Blount continues to impress
O line is looking dominant
D Line is looking dominant in run defense and pass defense.
ST’s continues to shine. Kenjon Barner is a welcome addition..great run back today.
I love this team!

Funny how most eagles fans didn’t have us winning the Divison, and were all sleeping on the personell that animal Howie made over the past 2 seasons. Not all eagles fans, but most.

Most also had either giants or cowboys winning the east just because they signed a 34 year old FA Wr and had no oline and run game Lol!

Beau Allen is slept on freak! remember he missed slot of time and preseason with pectoral injury during a lift session.

Jernigan needs to get paid this offseason. Build this team thru the Dline
It’s unreal how Patrick Robinson has revived his career after not showing much in camp and preseason to the fans and coaches.

Still early. But we are finding Ways to win without even using our 2017 draft class, and best players in darby, cox, Sproles, McLeod etc and other depth players! Wait till get Darby and Sidney Jones in that secondary. We need that speed to shut down some of these big plays. Glad to hear BIg V played well.

Is Donnell out for the year?

Like I said all Kenyon Barner does is make plays. Seth Joyner said after the game for the life of him he never understood why Barner was let go all he ever did was make plays. Hes better than Pumphrey, Smallwood and Clement.

look…. throughout the league year after year teams pass on players that turn into good players…. Tom Brady was passed over by every team-including New England multiple times, The Bengals drafted J. Elliott then left him exposed. When you have to make personnel decisions those things happen.
Think about the fact that the birds have been stung by injury bug yet they have really shown good depth on their roster…

Excellent game plan by Doug yesterday! Stay away from Arizona’s strength (Patrick pederson or whatever his name is…). Don’t even look Alshons way. Go to TE and wr 2 and 3. Pound the rock… this team rolling, I was scared of the cards for sure as I wasn’t sure wentz was reAdy to smash a great D.

The curse of paulman has been lifted

We looking mad good , who better than us in the nfc? Falcons scare me in Atlanta but that’s it

Wentz, the only QB in Eagles history to score 3 TD’s on the first 3 possessions of any game.
Prior to game yesterday, Eagles had converted 50% of 3rd downs in 3 of first 4 games of season for the first time in 25 years.
2nd in NFL in 3rd downs – 50.9%

We still shouldn’t have mortgage the future lol

They respect and believe in this qb and staff. That’s very rare around the NFL. It helps because he was a ex player and knows that locker room.

Schwartz demands his respect and his success in the past says it all.

I really hope he stays. He’s he HC of the defense and he’s in Philadelphia. Jim Schwartz fits Philadelphia. His demeanor, personality etc and style of football. I pray he stays and is our jim Johnson with our andy Reid clone.

Perfect situation for him. I know he wants to be a HC. But hopefully he thinks about staying long term

Just stay till we get a sb

i love how this teams offense looks different every single week! ive been waiting for decades for a coach that can mix it up week to week.

I call BS on the “mixing it up thing”– they dropped back to pass 23 times in the first half while getting the lead- while running it 9 times– those numbers were pretty much reversed in the second– this is typical AR– pass to get the lead run to hold it- as I mentioned the imbalance in the KC game was a direct result of situation, opponent and quite frankly everyones darling Seaumolo…

in that case you are correct— however, I think DP has been very very consistent– he has a drastically better QB and talent than he did last year– LJ’s suspension was a killer — I really think DP has a feel for the game- I think he gets great input from his offensive coaches and they are on the same page- my guess is that as a play is called officially all the coaches could have guessed what the call was before it was made.– one thing about AR’s teams they seemed to always be ready to play– exception dream team- I think DP has that same trait.
I also wonder if the very good depth they are demonstrating isn’t in large part to Douglas in the FO and his impact on getting the next level player– dunno but they have shown excellent depth.

u right there. was easier to look like a good coach when you got:

your franchise qb going from 0 trust in WR to studs catching the ball and making plays everywhere. plus many valuable lessons learned last year especially as it relates to winning tight games…

ertz just dominating the nfl. and building chemistry with wentz. this combo as deadly and reliable as any in the nfl. may be the most dominant

and lane being back.

and the video was released by a stripper because krappernick doesnt have a job in the nfl. WOW people are nuts

Eagles coach Doug Pederson confirmed RT Lane Johnson is in the concussion protocol.
Johnson suffered the injury Week 5 against the Cardinals. With the Eagles playing on Thursday night, it is highly unlikely Johnson will be ready to face the Panthers this week. Halapoulivaati Vaitai will likely get the start with Johnson sidelined.
Source: Jimmy Kempski on Twitter
Oct 9 – 12:07 PM

Let’s get Big V some more reps!! He looked good apparently I would have to go back and look at the game.

Gonna be interesting to see if we keep peters after this season.

Sproles is gone which is gonna save $

We have the bear jew he’ll get Em signed……i hope at least Cox plays…..carolina have washed up Charles and situational rusher addison starting at de big v should be fine

Peppers has 5.5 sacks this year for Carolina.