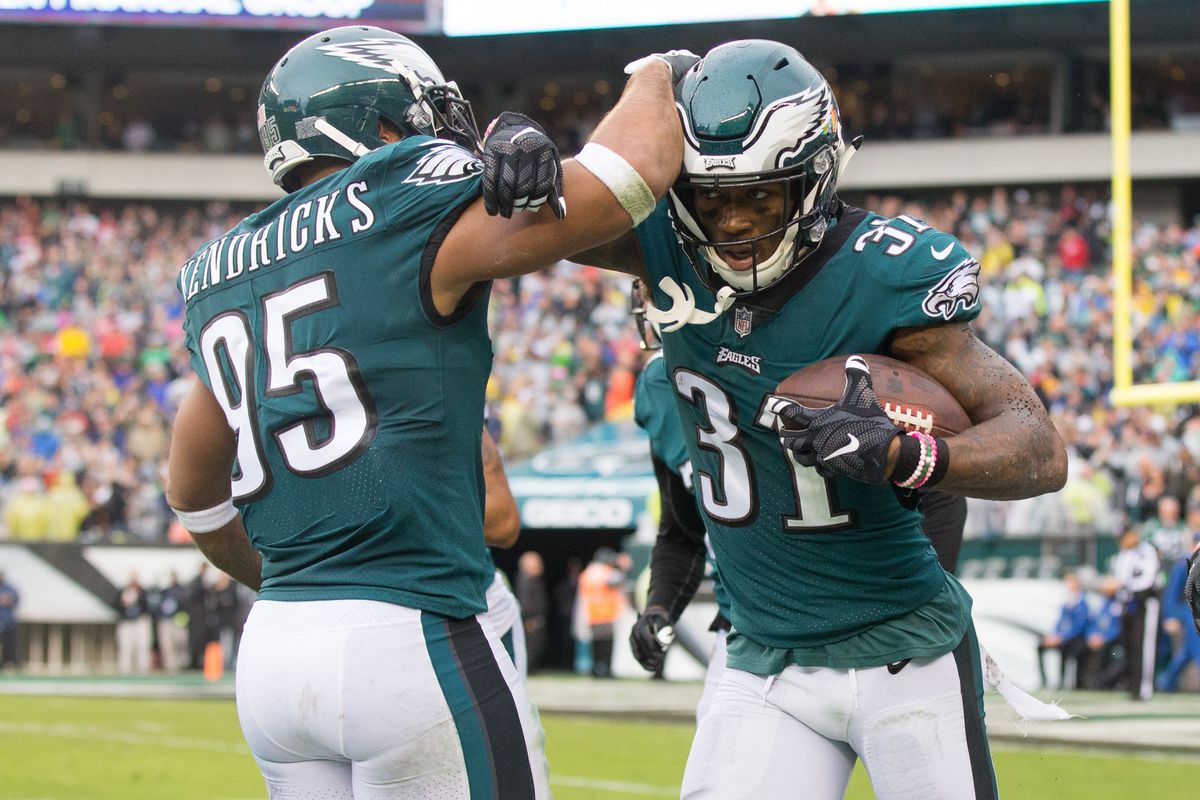 It was an orderly win at Lincoln Financial Field on Sunday afternoon.

The Philadelphia Eagles came out and took care of business, dropping the San Francisco 49ers to 0-8 in a 33-10 thrashing.

The Eagles pretty much did exactly what you’d expect on the defensive side of the ball. They shutdown the lone 49er weapon in Carlos Hyde. The top run defense in the league held Hyde to just 25 yards on 12 carries, forcing rookie quarterback C.J. Beathard to find a way to beat the defense.

Spoiler alert: he wasn’t up to the task.

Beathard took a pounding, as he was sacked four times and took shots throughout the game. He finished just 17/36 for 167 yards with a touchdown and two interceptions.

Beathard’s second interception really put the game out of reach for the Niners when he tossed a pick-six to Jalen Mills right before the half.

If not for an offensive turnover that set up the 49ers with a short field, the defense might have been able to pitch a shutout today. They were that good. Granted the opponent in front of them had all sorts of problems, but give Jim Schwartz credit for the game he called today to make life hell for a rookie quarterback.

Carson Wentz and the offense didn’t have their best day, but they managed to put forward all kinds of positives for us to talk about.

Wentz’s best moment came late in the third quarter. Following the drive where he made a bad pass on an interception that led to the only San Francisco touchdown to give the Niners life, Wentz quickly responded by hitting Alshon Jeffery for a 53-yard touchdown to immediately deflate San Francisco and restore order.

This is the mark of a great quarterback. Unlike the previous band of failures and rejects that Eagles fans have been subjected to, Wentz isn’t the type of quarterback that hangs his head after a mistake. Instead, he bounced right back, and made the defense pay for it on his next opportunity. That’s what a winning, elite quarterback does.

There was a lot of talk about this week’s match against the 49ers being a trap game. I never bought-in to that idea.

The 49ers were just too bad of a football team playing at such a miserable level, this winless bunch never had any business coming across the country with a rookie quarterback and upsetting the Eagles.

If there’s a true trap game on the schedule, its next week’s game at home against the Denver Broncos. But that’s a story for another day.

The 7-1 Eagles are cruising with the best record in the league, and a chance to go to 8-1 before the bye.

Carlos Hyde kept dropping first downs. He isn’t very good.
Wentz gets a lot of passes batted down at the line of scrimmage. Even is off days are decent. Wentz is a good QB.
I think Chargers Keenan Allen got the better of Jalen Mills but since that game Mills has won the battle 4 weeks in the row easily.
Barner let a lot of punts bounce today and the roll wasn’t in the Eagles favor.

rain kept a few fans out of the stadium this week and very few Halloween costumes being worn because of the rain.

nice win – need to improve the oline in a hurry. Confidence will go along way and hope that big V got a bit of confidence as he will need it against Von Miller. Fly Eagles Fly

Cox could be suspended… damn

Being reported that Fletcher Cox will be fined for hit on Joe Staley, but, will not be suspended.
I don’t know what the fine is for, I have looked at the play repeatedly and I don’t see anything that warrants a fine.
No flag on the play either.

Eagles get Ajayi from dolphins. Not sure how I feel

Jay Ajayi is a productive work horse back, I really like that move if it’s credible. I do see it on PFT.com.

yup. thought about it great move. guys on the books for like 700k next year too! he a 3 down back

Howie thinking long term. This guy is a better pass blocker and he can catch the ball a little too. Better fit all around.

There is obviously more pressing needs, but couldn’t pass up the value here. 1 less glaring long term hole for a 4th.

there wasn’t much available in the free agent market at running back, Blount for the price is as about as good as anyone could do. But the draft is totally different … the Donnell Pumprey miss selection stung and cost the Eagles a 4th next year for Ajayi today.

Howies not done yet ,before the days over ,I’d expect he’ll have his trick or treat basket overflowing .The Eagles at 7-1 are in the mindset to make things happen and at the same time look at the economics towards the future .Jeffreys is not a number one receiver ,idk ,but if they can steal a. Wide out ,that’s Landry in Miami ,who isn’t done dealing ,it would set the birds up with young cheaper talent ,and allow for there run at the elusive crown

Word out of miami is he’s a bit of a headcase, immature and petulant– a small risk to a 7-1 locker room with lots of leaders etc– he sounds like L. Blount earlier in his career– mentor type of thing….

Jordan Hicks placed on Injured Reserve to make room on the 53 man roster for Jay Ajayi, no releases.

remember when HAC claimed that Pete Mackanin did a good job, you know yesterday for being a bottom 3 MLB team.

That really shows your lack of understanding with where the phils were, what their PLAN was and the players on their roster.
In 2011, 12 and 13 the Astros lost an AVERAGE of 109 games per year- it is the new baseball- and trust me I’m not a fan but its a fact- Mackanin did what was asked of him– what his bosses wanted and now its time for the GM to hire his own– Mackanin did a real nice job– its universally recognized by anyone with KNOWLEDGE – which counts you out-

the tip of Dave Spadaro’s nose is brown but you have even him beat, haveacigar, your entire face is splattered with shit with how much ass sniffing and licking you do.

I have no loyalty to Pete…. he did a nice job in his situation, was rewarded with a contract, he was never going to take this team to the new era… fortunately for you, it’s almost tennis season and you can go to a tennis blog and say dummy shit.