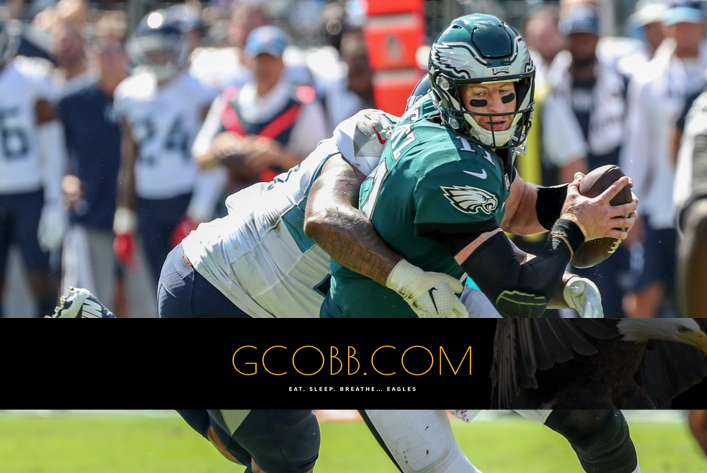 The Eagles offense had a productive day against the Titans, but they weren’t able to score touchdowns with the game on the line to secure the victory.  The Birds had to settle for field goals and the offensive line and running backs did a horrible job protecting Carson Wentz.   I don’t see how he can stay healthy if he continues to be pummeled like he was yesterday, he might need the intoxicating cannabinoid to relax his muscles.  During the game, Wentz was sacked four times and hit a total of fifteen times.  Many of those hits were made with the blitzing attacking him at full speed.

It seemed that the Tennessee defense played with more fire than the Eagles offensive line.  They were firing off aggressively and putting big hits on Wentz.  The Eagles offensive line was unable to prevent it for whatever reason. They need to do a much better job communicating because there were blitzers coming free on many plays and they were pummeling Wentz.

Carson has to take some of the responsibility as well because he was holding the ball too long.  If nothing is there he’s got to give up on the play and throw the ball away.   The Eagles offensive line and running backs weren’t on the same page and Wentz was getting hit because of it.   I thought Wentz played a good game in his second outing since returning from injury, but he almost made a huge mistake in overtime when he forced a throw into Ertz.  The throw would have been very costly but fortunately, linebacker Will Compton dropped the football.  This is the same mistake he made against the Colts last week.  He gets focused on Ertz and telegraphs the throw.

but Pederson chose to throw the football too much.”

I thought Eagles wide receiver Alshon Jeffery played well in his first game back from the shoulder surgery.  He came in and right away he made an immediate impact with his size and ability to go up and get the football.   Jeffery caught eight passes for 105 yards and one touchdown.  I though he played very well, but unfortunately he wasn’t able to come down with a throw in the overtime that could have ended the game.  It was a pass that he should have come down with, so everybody had a hand in the loss.

Wide receiver Nelson Agholor was horrible in the way he played yesterday.  He dropped a total of five passes and caught five passes for 24 yards.  Numerous times he was taking his eye off of the ball and trying to run before he caught the pass.  He was playing passively and waiting for the pass, so he could trap it to his body as opposed to catching the football with his hands.  The slot receiver got hit in the face mask with one of the throws. There was a lack of confidence that I hadn’t seen in Nelson since a couple of years ago.  He knows better than that — hopefully he’ll come back and play much better in the next game.

I thought Zach Ertz had a tremendous game with ten catches for 112 yards.  He and Carson are on the same page and they are able to carve up defenses whether they’re in zone or man-to-man.   Ertz has to be doubled in order to be stopped and that really puts defenses in a quandary.   They can’t double both Alshon and Ertz at the same time, so they have to pick their poison.

The offensive line played poorly, and head coach Doug Pederson has to take some of the responsibility for that.  He called 52 pass plays and only 20 running plays.  The Birds averaged 5.5 yards per carry on those twenty carries for a total of 109 yards on the ground, but Pederson chose to throw the football too much. This puts the offensive line in a very tough position and it put Wentz in an even tougher spot.

Eagles left tackle Jason Peters is no longer the same Jason Peters who would intimidate pass rushers to the point where they would stop rushing.  I saw him get run over in this game and I have never seen that in the past.  Pro Bowl right tackle Lane Johnson played poorly on Sunday as well.  He was beaten by Landry for a sack which resulted in a turnover that was a key factor in the loss.  In addition to the tackles, the guys up the middle were struggling as well because there seemed to be a number of jail breaks with linebackers and defensive backs coming free up the middle to put hits on Carson.

Wendell Smallwood might have made a mistake or two with his blocking assignments, but I liked the way he ran the football.  Smallwood is running with more desire and toughness.  He averaged 7.8 yards a carry on five carries.  Jay Ajayi ran well also and he averaged 4.7 yards per carry on his 15 carries.  The only person who stopped the Eagles running game was Pederson.

In the same way the defense must examine themselves, the offense needs to look at the man in the mirror as well and ask the tough questions.  Pederson has to ask himself if he is throwing the football too much.  Carson has to ask himself whether he is holding the ball too long.  The offensive line, tight ends and running backs must ask themselves, “Do I know who I’m blocking on every blitz?  Do I know all the adjustments on each defensive alignment?  What happens when Carson changes the play at the line of scrimmage?”  The National Football League makes you talk to the man in the mirror quite a bit.

Should The Eagles Bench Jalen Mills?