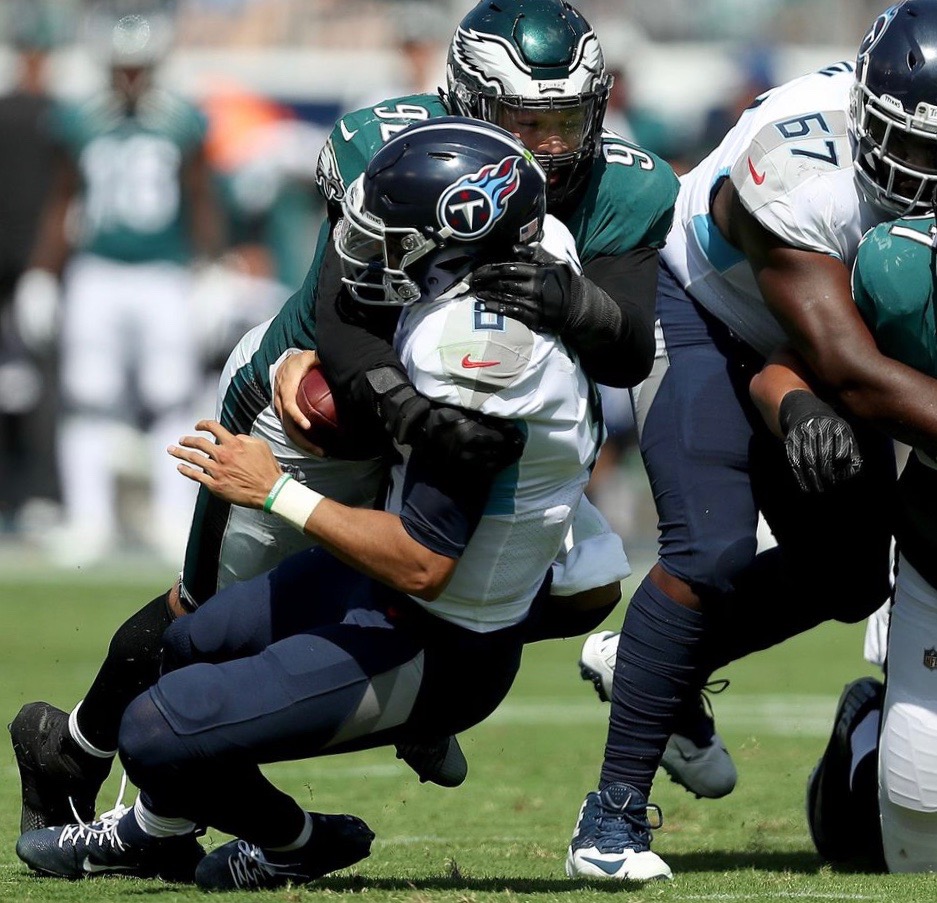 The Eagles most productive defensive end Derek Barnett has been ruled out of this Sunday’s game against the Minnesota Vikings. Barnett has an injured shoulder and will miss his first game of the season.

Barnett has come down with 2.5 sacks in the first quarter of the season, which is the most of any of the Birds’ defensive ends.  He had the big sack of Colts quarterback Andrew Luck late in the fourth quarter, with the Indianapolis offense on the Eagles four-yard line.  It all but ended any hopes for victory by the Colts.  The absence of Barnett emphasizes the need for veterans Brandon Graham, Chris Long and Michael Bennett to have big games on Sunday.

It also opens up an opportunity for the Birds to utilize rookie defensive end Josh Sweat.  Sweat, who has shown tremendous potential in practice, will likely take some of the snaps in the rotation with the veterans.

Graham hasn’t had a sack since his Super Bowl-clinching strip sack of Tom Brady.   The former Michigan Wolverine had ankle surgery during the off season and missed all of training camp.  This week Graham said that he’s starting to feel like himself again and expects his productivity to increase.  If it does, it will be just in time because the Vikings have an explosive passing attack.

The Birds will need to put pressure on Minnesota Vikings quarterback Kirk Cousins, who is one of the league leaders with 1387 yards passing in four games.  If Cousins is allowed to sit comfortably in the pocket, he might be able to pick the Birds secondary apart.  Remember that the Eagles are missing safety Rodney McLeod and they have veteran safety Corey Graham taking his place.  I also want to mention that defensive tackle Haloti Ngata is listed as questionable with a calf injury.

Cousins’ number one target is wide receiver Adam Thielen, who has 473 receiving in four games and has had at least one hundred yards receiving in each game this season.  Another Cousins target is Vikings speedy wide receiver Stefon Diggs, who has 311 yards receiving and is always a threat to go deep.  Don’t be surprised if they get Diggs matched up on embattled Eagles cornerback Jalen Mills, who has had trouble defending the deep ball.

The Birds’ defensive line must get some pressure on Cousins in order to stop him from getting in a rhythm and slicing up the Eagles’ secondary.  This will be a huge game for the secondary as it tries to overcome the absence of McLeod and Barnett.

Eagles veteran running back Darren Sproles is another key player who will miss this Sunday’s game.  Sproles has been sidelined for three games with a hamstring injury.

The Birds are hopeful that second year running back Corey Clement will be able to go on Sunday.  He’s listed as questionable with an injury to his quad.  If Clement can’t go, it will mean Wendell Smallwood, Jay Ajayi and rookie Josh Adams will have to step up and perform blitz pick up on third downs.  He struggled last Sunday.  Hopefully, this time around he’ll be better.

Do The Eagles Miss Frank Reich?