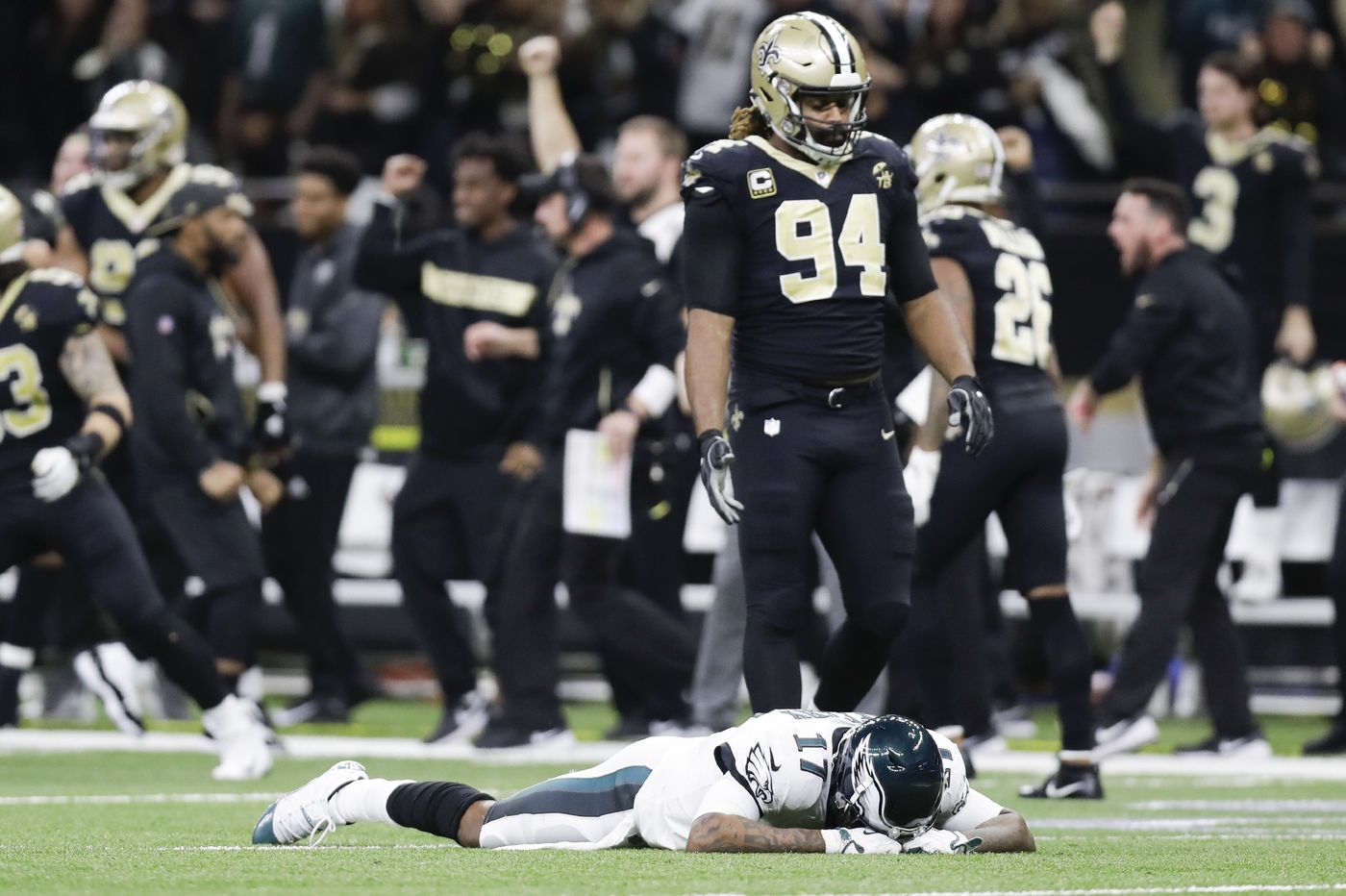 Eagles Start Fast, Run Out Of Gas As Season Ends

The stage seemed to be set for another upset.

A Cre’Von LeBlanc interception set the tone early, and two quick touchdown drives by Nick Foles and the Eagles offense got the team out to an early 14-0 lead.

But that would be all the points they’d be able to generate on the day, with the Saints slowly scoring 20 unanswered points over the final three quarters to dethrone the defending Super Bowl Champions.

The Birds had the ball deep in New Orleans’ territory with just over two minutes to go when Alshon Jeffery allowed a ball to go right off of his hands and into the arms of Marshon Lattimore, ending the team’s final opportunity.

There are a lot of points where momentum swung in this game. Nick Foles started hot, but faded down the stretch. His early interception on an underthrown ball to Zach Ertz swung momentum, and took away at least an opportunity for a field goal. Foles also underthrew Golden Tate later in the second half, and just wasn’t as sharp as he usually is.

Doug Pederson made several mistakes throughout the game as well that cost the team. Declining the holding penalty on third down on the play before the Saints’ fake punt was a foolish mistake. Anyone that knows Sean Payton knows that in a game this big, with the way momentum was on the Eagles’ side early in the game, with a 4th and 1, Payton would go for it in some way, shape, or form. Of course, the Saints may well have picked up the third and 11, but I’d rather take my chances with the longer down and distance than give Payton an enticing one-yard conversion opportunity.

Burning the timeout early in the third quarter was also a bad moment.

The coaching staff as a whole did not adjust well to the Saints’ adjustments. The Eagles came out with tremendous energy, show Pederson’s staff should get ample credit for having them ready to go, but they had no answer for New Orleans’ counters on either side of the ball.

The injury bug also rose up to bite the Eagles in this one, taking Brandon Brooks out of the game in the first half, and hampering Fletcher Cox, Rasul Douglas, and Michael Bennett among others throughout the game.

This one hurts because of how utterly winnable it was. It hurts that the offense couldn’t generate a single point after the first quarter. It feels like one of those games where the Eagles wouldn’t get out of their own way, and it cost them the season.

It’s a frustrating end to a great run.

The Eagles did very well to get themselves into the playoffs, and into the second round. About a month ago after the Dallas game I wrote that I wanted to at least see the Eagles have a chance to properly defend their championship in the playoffs. At 6-7, I didn’t think we were going to get that much.

But Nick Foles came in, and in what could well be a curtain call for his Philadelphia career, rallied the team and took them on one more run, successfully ripping off three in a row to get into the playoffs, and pulling an upset over the Chicago Bears.

There’s a lot of tough decisions ahead of the franchise.

What happens to Foles? What about some the older veterans like Jason Peters and Brandon Graham?

Does Golden Tate stick around? Do injured pending unrestricted free agents like Ronald Darby or Jay Ajayi come back on cheap prove-it deals?

There’s a lot to work through, and questions to be answered in the coming weeks.

Eventually, the sting will fade and we’ll all look back on this run with some very fond memories of a team that fought to the bitter end. But right now, it’s a missed opportunity that hurts quite a bit.