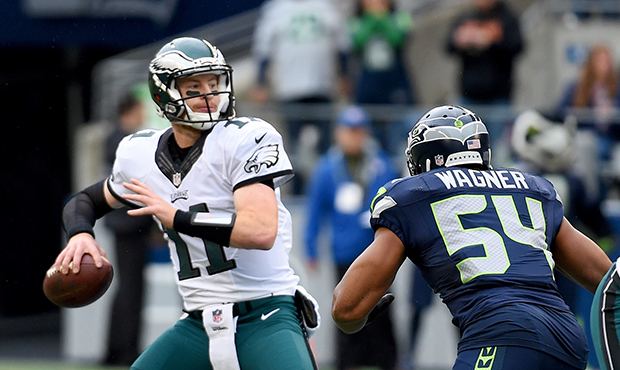 If you told the Eagles prior to last weeks, game that they would score on a 95 yard drive, and hold Tom Brady and company to just 17 points, they would take it. The sad part however, is that they lost because the offense failed to get anything going after the 95 yard drive. A

After a disappointing 17-10 loss to the New England Patriots, the Eagles play host to the Seattle Seahawks. The Eagles have seemed to dodge a bullet as Jadeveon Clowney, who has missed practice all week due to a core muscle injury, is inactive. That is good news for the Eagles as they are going to be without Right Tackle Lane Johnson who is out with a concussion. Andre Dillard slides over to fill in for Lane, but its going to be impossible to replace one of the best tackles in the NFL.

With weather conditions not conducive to throwing the ball down the field, expect both teams to rely heavily on their athletic Quarterbacks and their running games going forward. Chris Carson and Miles Sanders are going to be the names you hear from the most as both running backs are expected to take on lead roles. The Seahawks still have excellent weapons on the outside and the Eagles secondary needs to stay disciplined. Tyler Lockett is one of the best route runners in the NFL and has developed great chemistry with Russell Wilson. Their rookie DK Metcalf has exploded onto the seen as a solid WR for their offense. A couple of weeks ago the Seahawks claimed WR Josh Gordon off waivers, giving them three excellent options to move the ball down field. If the Seahawks want to test Mills, Darby, and Maddox, they certainly have the weapons to do so.

Defensively for Seattle, they are without pass rusher Jadeveon Clowney, but still have two of the best linebackers in the NFL in KJ Wright and Bobby Wagner. The Eagles recently have been running their offense through Zach Ertz, Dallas Goedert, and Miles Sanders and today will have to be the same formula. Alshon Jeffery, Nelson Agholor, and Jordan Howard are all inactive today due to injury. If the Eagles expect to have any chance at winning, with their injuries as well as the weather conditions, they need to commit to the running game to have any chance at winning.

Russell Wilson is having an MVP season and is dominating NFL defenses week in and week out. The key to beating Seattle is keeping him contained in the pocket and limiting his ability to make big plays with his legs. That’s easier said than done. However time and time again Wilson has made even the elite pass rushers look silly trying to bring him down.

Prediction: The Eagles injuries normally would be too much to overcome. Down both starting WR’s, starting RB, and RT, the Eagles are going to heavily rely on Miles Sanders and Zach Ertz. The Eagles have been excellent all season in stopping the run and are going to need to do the same again this week. With no Clowney, the Eagles should be able to leave Dillard alone with no help when they decide to throw allowing Goedert and Ertz to get free releases down field.