Wentz Should Request That They Pay Peters 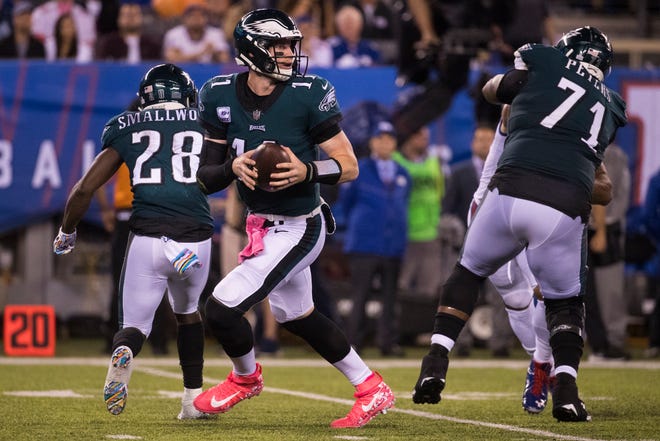 There’s no question that Carson Wentz is now one of the key player leaders of the Philadelphia Eagles.  He’s the Eagles franchise quarterback with a four-year $128 million dollar contract and his play in 2017 is one of the main reasons that the Eagles won their first Super Bowl.  Wentz is a tireless worker, who seems to be willing to do whatever is needed to make himself better and to make this team better.  He must request that the Eagles pay future Hall of Famer Jason Peters to move to the left tackle position.

The Birds will battle the Washington Football Team in their first game this season on Sunday September 13th, so they have a little over a week to prepare for the game.  Due to a season-ending injury to starting second-year left tackle Andre Dillard, the Eagles find themselves in an awful situation at left tackle, one of the key positions on offense.  I don’t think there’s any way that the Eagles are foolish enough to start untested Matt Pryor, who has played previously at right guard, against the much talked about Washington rookie defensive end Chase Young, who was the second pick in this year‘s NFL draft.

In a scrimmage this past Sunday at Lincoln Financial Field, Pryor made Eagles backup defensive end Josh Sweat look like he’s headed to the Hall of Fame.  Clearly Pryor is not ready for prime time, when it comes to playing the left tackle position.  He’s backed up by another unproven young blocker in Jordan Mailata, who is a converted rugby player with no NFL experience.  If they decide to line up Pryor against Young, the Eagles 2020 season could be over before even gets started.  The former Ohio State phenom will be licking his chops and coming at Wentz from his blindside with nothing in his way but Pryor, an inexperienced third-year Eagles backup, who will be shaking in his cleats.

The Birds happen to have former All-Pro left tackle Peters on the roster, but right now he’s lining up at right guard, which is where Pryor started against the Seahawks last year in a playoff game for the Birds.  Peters signed a $3 million dollar-a-year deal with the Eagles to take the place of All-Pro right guard Brandon Brooks, who was sidelined for the season with an Achilles tendon tear before the Birds reported for training camp.   The surefire future Hall of Famer has been getting some very positive reviews from the Eagles defensive tackles, who have been taking him on.  Both Fletcher Cox and Malik Jackson have been impressed with the pure strength and quickness of the 38-year old veteran.

A couple of days ago, Head Coach Doug Pederson said Peters is going to stay at right guard for the time being and Pryor will start at left tackle.  I heard him say it, but I still don’t believe it.  Philadelphia Inquirer writer Jeff McLane was the first to report that Peters remains at right guard because he wants to get a substantial raise in order to move to left tackle and so far the Eagles have refused to pay the money.  This same story was reported by Tim McManus of ESPN and it’s been swirling around the Birds for four or five days.  Pederson didn’t answer a question about this matter when he was asked about it a couple of days ago.  He did a great job of changing the subject and emphasizing how great Peters was doing at right guard.

I think it would be unacceptable to allow Pryor, an unproven left tackle who would be much more comfortable at right guard, to start at left tackle against the Washington Football team rather than Peters.  There’s no comparison between blocking speedy defensive ends flying up field with all that space outside, compared to the crowded area inside at the guard position.  There’s a reason that talented tackles are cherished throughout the National Football League.

This situation has to be weighing heavy on the minds of all the decision-makers in the organization, but the guy most directly affected by the lack of a quality blocker at the left tackle position will be Wentz.  If they keep Pryor at that left tackle spot, number eleven on the Eagles roster, who like Young was also the second pick in the draft when he came out in 2016 will likely spend his nights between now and the opening game of the season thinking about the much talked about rookie defensive end attacking him from his blindside with the inexperienced Pryor at his mercy.

The Eagles will definitely be the favorites in the game, but the one advantage Washington could have, would be if their talented defensive front takes over the game because of their ability to put pressure on Wentz.  Make no mistake about it, Washington rivals every team in the league when it comes to pure talent on their defensive front.

The Washington Football Team will have four number one draft picks attacking the Eagles offensive line on Sunday.  In addition to Young, Montez Sweat will be rushing Wentz from the Birds right side.   Washington got him last year in the first round out of Mississippi State.  I’m hoping Eagles Pro Bowl right tackle, Lane Johnson will be back from the injured list in time to battle Sweat.  Inside at the defensive tackle positions for Washington will be two former Alabama Crimson Tide number one draft picks, Jonathan Allen and Da’Ran Payne.  They are sure to give center Jason Kelce, right guard Isaac Seumalo and whomever starts at right guard all they can handle.  I can guarantee you that defensive coordinator Jack Del Rio and head coach Ron Rivera have put together pass rush pressure schemes to force every Eagles offensive lineman to prove he can block the guy in front of him one-on-one.  Del Rio was defensive coordinator for some of those awesome Baltimore Ravens defenses and Rivera played for Buddy Ryan’s 46 defense in Chicago, so they know unlimited pressure schemes.

One mistake against this talented defensive front could destroy the game and the season for the Birds.  Adding Young to the already talented Washington defensive front could make them virtually unstoppable.  I can guarantee you that Del Rio and Rivera are going to create game situations that make the Eagles offense look horrible.  The Eagles will need to protect the football in those situations.  One of the keys to the Birds keeping the Washington defense under control will be establishing a running game against this crew.   The Eagles will need to utilize every ounce of talent they have on the roster to win this game and leave Washington in one piece.

This is why I would like to see Carson take an aggressive leadership role in solving this left tackle problem.  He knows what it feels like to drop back in the pocket in a NFL game and be unsure about the big guys in front of him.  I want to Wentz to do what a franchise quarterback, who is signed to a $128 million dollar deal for four years, can do by asking for a meeting with Head Coach Pederson, General Manager Howie Roseman and team owner Jeffrey Lurie, if necessary to solve their problem at the left tackle position.

He should express to the Eagles brass that he does not feel comfortable playing behind an offensive line with Pryor lining up at left tackle instead of Peters.  Wentz should tell Pederson, Roseman and Lurie, that he must have former perennial Pro Bowler  Peters lining up on his blindside.  He should let them know that he’s not being a coward by calling the meeting and making the request, but he’s doing what a leader should do.  It’s the responsible thing to do.

Once Wentz makes this request, it puts a tremendous amount pressure on Pederson, Roseman and Lurie.  Who knows what will happen if they make the move, but it’s the proper football decision.  There’s no way the Eagles should go into the Washington game with Peters starting at right guard and Pryor starting at left tackle.  They can add the four million dollars in the future and work it out with Peters.  Roseman is a genius at finding loopholes in the NFL salary cap.  Yes it may make a move or two more difficult later in the season, but you cannot responsibly send Wentz out there after he tells you he is uncomfortable with the situation.

All Wentz needs to do is to be honest.  He’ll be doing what a leader should do.  Tom Brady, Drew Brees, Aaron Rodgers, and Russell Wilson would have no problem making this request because they would know it is in the best interest of the football team.

Do the right thing Carson and make the request.

Don’t Know How It Happened, But Peters To Left Tackle Is The Right Move