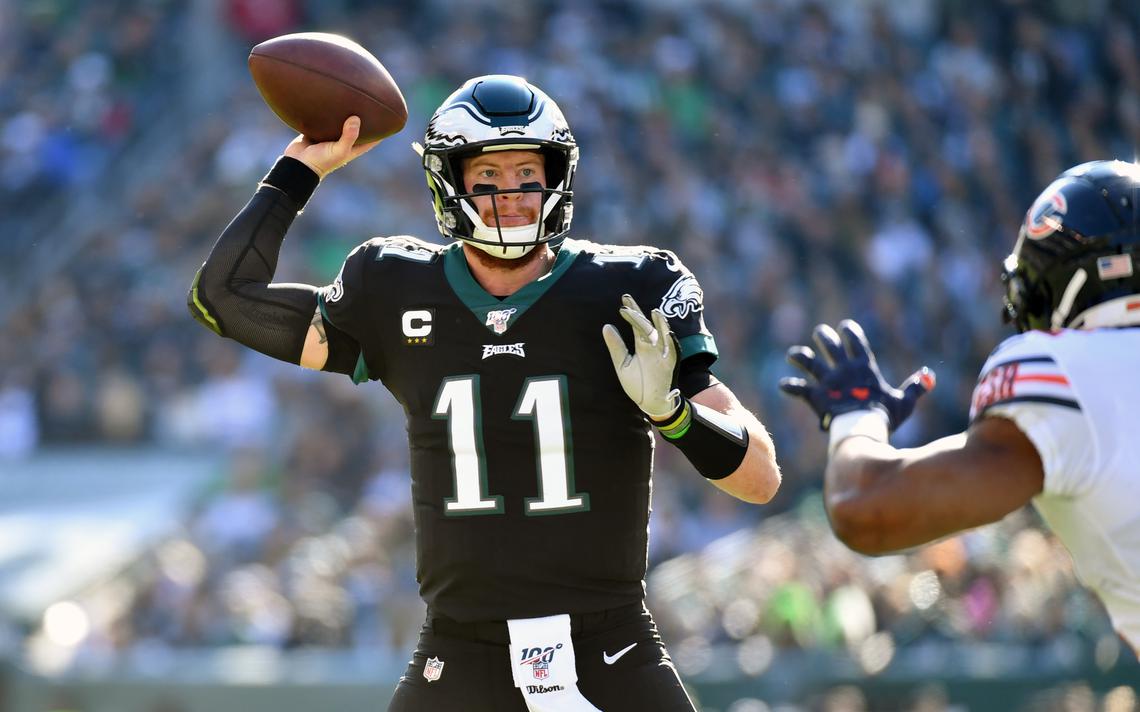 After a questionably timed pulling of starting QB Jalen Hurts in the fourth quarter of the season finale vs Washington, the Eagles dreadful 2020 season finally came to an end.

From the questionable NFL draft decisions to the inexplicable 17-0 collapse against Washington in week one, to the benching of their franchise QB against Green Bay, this Eagles season was nothing short of one of an franchise with major issues.

Going into the NFL draft the Eagles desperately needed to accomplish three things. They were to get younger, add more playmakers and speed, and build around their franchise QB that they just signed to a 4 year-$128 million contract extension. Instead, the Eagles took a different approach to the draft and free agency, one that just 8 months later has them in hot water.

In 2019, Carson Wentz threw for over 4000 yards and not one of his receivers had more than 500 yards receiving. While injuries were a big contributing factor, outside of Ertz, Wentz didn’t have a reliable outside threat. First round pick JJ Arcega-Whiteside couldn’t get on the field, DeSean Jackson got hurt early, came back and got hurt again, Nelson Agholor just couldn’t handle the pressure from the city, and Alshon Jeffery was either injured or just looked disinterested on the field.

Going into the offseason, the Eagles owed it not only to their $128 million dollar QB to get a star offensive weapon, but also to their coaching staff and fanbase. Passing on DK Metcalf for JJ Arcega Whtieside was one of the more baffling personnel decisions that will follow the Eagles and Howie Roseman forever. Luckily, Howie was gifted an opportunity to fix the situation the following year as this past draft class of WR was called “possibly the best WR draft class ever.”

Even though Howie Roseman dropped the ball, much like the receivers he picks, he still had another chance at righting some major wrongs he committed. The consensus top three WR coming into the 2020 NFL draft were Alabama stars Henry Ruggs III and Jerry Jeudy, and Oklahoma standout Ceedee Lamb. After those three, receivers 4-8 were all rated differently among countless experts and analysts. Henry Ruggs went first at pick 11 to Vegas, then Jeudy went to Denver at 15. That leaves 5 picks ahead of the Eagles and only 1 of the top 3 remaining. One of those teams were the Dallas Cowboys at pick 17. They already had All-Pro Amari Cooper and an emerging deep threat in Michael Gallup on their roster. If the Eagles wanted to draft one of those three studs, they probably did not anticipate having to move ahead of the Cowboys to get them. However, the entire league knew going into the draft the Eagles needed receiver help and that the Eagles loved CeeDee Lamb. The Cowboys selected Lamb at 17 and in hindsight, left the Eagles scrambling when their selection came around at 21.

SItting at pick 21 were LSU standout Justin Jefferson and TCU speedster Jalen Reagor. The Eagles had 0 talent on the outside and should have just taken the best receiver on the board. (Honestly they should have taken the best PLAYER on the board but they don’t value linebackers that can actually play at the NFL level so that wasn’t going to happen.) Justin Jefferson was deemed a slot only receiver by many analysts and so-called draft experts. Jefferson came from a pro style offense at LSU that shredded defenses every game with their gun slinging QB Joe Burrow. Reagor was called the flashy speed threat that can take the top off of defenses at any time but struggled with catching the ball consistently and running crisp routes. Jefferson on the other hand was best known for his route running and run after the catch ability. Was Reagor the faster, more “explosive” player? Probably. However Jefferson was the better all around receiver. In an offense called by Doug Pederson that doesn’t take many shots down the field, drafting a straight line speed threat wasn’t the ideal choice. In fact there

In their rookie seasons Reagor was in and out of the lineup, struggled with drops, struggled to get on the page with both Carson Wentz and Jalen Hurts. About a month ago NFL insider John Clayton went on the Washington Post Podcast and mentioned some potential “internal rifts” within the Eagles front office. He mentions that he heard most scouts in the organization wanted Justin Jefferson but Howie ultimately wanted Jalen Reagor. If this is true, this all falls on Howie. When your GM openly ignores his scouts and potentially his head coach when it comes to picking players, there is a major issue.

On top of (at the moment) taking the wrong player at 21, Howie then makes a controversial selection in the second round. The Eagles had just signed Wentz to an extension. The LAST position they should be drafting before round 6, is a QB. But at pick 53, the Eagles selected Oklahoma QB Jalen Hurts. What makes this move even more questionable is the fact that despite playing at an MVP level in 2017, watching his backup QB hoist the Super Bowl Trophy come back early from ACL surgery and play through a broken back in 2018, then have to throw to a receiving core full of practice squad players in 2019, and earn back his rightful franchise QB status among his teammates and fans, the organization drafts a QB in the second round.

Fast forward to September. The Eagles seem to get a gift to start the season. They open up against Wasington, the Rams, and the Bengals. At worst they should be 2-1 before the schedule gets harder. The Eagles jump out to a 17-0 lead and it was probably the highlight of their season because it all went downhill from there. They ended up losing 27-17 and Wentz got beat up and sacked 8 times. The following week, Sean McVay and the Rams seemed to run whatever they wanted in route to a 37-19 beat down of the Eagles. Up next, on paper, seemed to be the perfect recipe to win a game. A young, inexperienced team with a rookie QB. Instead, the Bengals and Joe Burrow battled the Eagles into OT and eventually tied the birds 27-27. After three games, possibly the easiest three game stretch of the season, the Eagles went 0-2-1. On the horizon was a a stretch of games against some of the NFL’s elite. Their next 11 games were anything but easy, in fact during that stretch they had to play the likes of Aaron Rodgers, Kyler Murray, Ben Rothelisberger, Lamar Jackson, Russel Wilson, Baker Mayfield, and at the time Drew Brees, who ended up getting hurt and missing the game. Mixed in that stretch are two games vs the Giants, one against the Cowboys (Dak was hurt), and a bye week.

The Eagles went 4-7 during those 11 weeks beating San Francisco who was decimated by injuries, the Giants who gave that game away, the Ben DiNucci lead Cowboys, and Jalen Hurts managed to narrowly beat Taysom Hill and the Saints. Of course we could look back and say what could have been. We battled with the Steelers but we couldn’t seem to cover Chase Claypool who went off and scored 4 TD’s. We hung tight with the Ravens, scoring late in the fourth, only to have Doug Pederson call a read option with Carson Wentz for what would have been the game tying 2-pt conversion. We ended up losing 30-28. The Eagles marched down the field on their opening drive in the pouring rain against Cleveland, only to have Miles Sanders fumble the ball on the 6 yard line killing all momentum. The next drive, Wentz is hit from behind and throws a pick-6 giving the Browns an early 7-0 lead. Despite only being down 7-0 at half, the Eagles couldn’t get their offense going quick enough and lost 22-17 to the Browns. The following week? The Eagles hosted Russel Wilson and the struggling Seahawks offense. Despite stopping the Seahawks on three straight drives to open the game, including two 4th down stops, the Eagles couldn’t capitalize and once again ran out of time in the end and lost 23-17. Remember DK Metcalf? He caught 10 passes for 177 yards against the Eagles. Yes we could have played the “what could have been” game, but the inefficiency from Wentz and the poor play calling and game scripting from the head coach doesn’t allow for that.

After struggling week after week, the Eagles decided to make a change at QB. After coming in to relieve Carson Wentz during the Green Bay game, rookie Jalen Hurts took over for the rest of the season as the team’s starting QB. While the rookie was definitely a breath of fresh air with his running acumen and beautiful deep ball, he was subjected to the same poor play calling and game scripting that ultimately affected Carson Wentz.

Here we are. Just a few days removed from the final horn sounding, effectively ending the Eagles season. After Washington got done celebrating its NFC East division championship and first playoff berth since 2015,  Zach Ertz, Carson Wentz, and Jason Kelce were spotted after the game sitting on the field. All three of them potentially could be gone next year, all three could be back. But those three sitting alone on the field, after watching their division rival go to the playoffs, sums up the Eagles season perfectly. The Eagles chose to ostracize their Franchise QB again by drafting a QB in the second round and neglecting the skill positions around him. Their Pro-Bowl TE asked for an extension and they told him no and their All-Pro, elite starting center who excels in the run game, was the only starting lineman to play every game in a pass centric offense.

Kelce has talked about retirement in the past and it wouldn’t come as a shock to anyone if he did after this past season. Wentz was benched, is unhappy, and despite a cap hit heavy contract could look to be traded this offseason. Zach Ertz wants to retire as an Eagle, but Howie has been reluctant to pay him. Four years ago, the Birds hoisted the Lombardi trophy and the future seemed bright, a dynasty looked to be on the doorstep. Fast forward four seasons later and the Eagles are at a crossroad. They can do one of four things. Continue forward as status quo and have no direction with 2 QB, an opening at head coach, and a GM that still can’t draft outside the top 5. They could pivot left, move Wentz, take the $60+ million cap hit and go forward with Hurts (almost signals you aren’t planning to be competitive for a couple years). They could pivot right, keep Wentz, and move Hurts for a lesser pick and hope to mend any bad feelings between Wentz and the Eagles hierarchy. With a lot of key roster and cap decisions coming up, Wentz has already shown he can lead a team to the playoffs with lesser talent around him. Or the Eagles could take this opportunity with the 6th overall pick and completely hit the reset button. Should one of the prized young QB coming out in this year’s draft become available at 6, the Eagles could look to go in a completely different direction.

The league year doesn’t officially start until March 17th, but the Eagles waiting until then to make any significant changes wouldn’t make any sense.