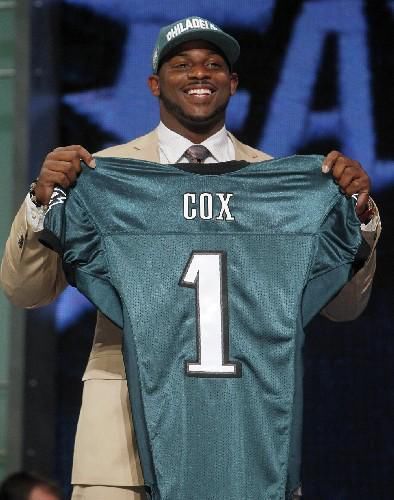 Philadelphia, it’s Draft Day, time to venture into the closet and select the luckiest Eagles jersey you own!  The level of uncertainty with the pick is puzzling, forget about the consensus on the preferred player, will the Eagles even make the selection at pick #12?  My gut tells me the Eagles are more likely to trade back in the draft, this could have something to do with my dream from last night, where the Eagles pulled off not one, but two trades this evening.  These dreams felt real, but I’ve been binge watching season 2 of Prodigal Son and the main character uses his dream sequences to solve murder mysteries, might have something to do with it.

Trade #2- Eagles trade pick #37 and a 2022 3rd round pick to the Jacksonville Jaguars for pick #25 and draft cornerback Asante Samuel Jr.

Back to reality, most would not believe the fact that I want Howie to be the ‘man’ tonight.  Nothing would please me more then to eat crow and devote a Friday article praising Howie for making the right decision with his first-round selection(s).  With eleven pick selections over seven rounds, I present the Eagles faithful with my full Eagles draft guide.  Rounds 1 to 7, here are 113 players ranked in order of preference and round I would select them.  The depth at defensive end, defensive tackle and tight-end presents the weakest overall depth which ‘hopefully’ the Eagles recognize and devote their attention to the strengths of the draft, specifically centered on cornerback, interior offensive line, linebacker, safety and wide receiver.

Kyle Pitts, wishing you were here

Philadelphia Eagles moved up to 10 for Alabama WR Devonta Smith

Howie is going all in for Aaron Rodgers
Sending Flacco, Ertz, Andre Dillard , Pick# 12 and 2 First Round Picks in the 2022 Draft

Panthers will be offering a better package !!

Thank You HAC , this tragedy occurred 2 Neighborhoods Down the road from us and within a half-mile of my Neighborhood.. Prayers to go out to to the lives lost in a senseless incident.. Crazy Times everywhere

That was a clown article

Looks like your man crush was never going to be available at 6 after all. This makes your name calling article even that much more foolish

Yeah Pitts was a pipe dream at 6… eagles and “fire Howie” knew it… trading out of 6 was the right call. Atlanta had a historically bad defense, an over paid #1 receiver and decided to take a shot by getting the most talented player… kicking the can down the road… Ryan, Jones and Pitts will get them 9-7 and a first round defeat.. 2 years from now no Jones, Ryan in serious decline,,, dumb.. they have the shiniest toy of the draft and will be watching the SB on their couch just like me

Now if the tackle from Oregon goes 5 the trade down was absolutely brilliant. If Oregon tackle doesn’t go 5 we should’ve stayed put and picked him imo

I need a dirty woman
Reply to  Paulman Reports

Well there have been surprises… gonna be good players at 12… bengals are dumb. … wow.. 2 QB sliding… eagles trading back…

Cowboys go OL Slayer or LB Parsons ? Or Trade Down to Patriots or Bears ?
Giants for with whoever is left over or OL Vera-Tucker WR D Smith?

A Good Pick and a very Dynamic Player, Hope he can can stay healthy/durable at his size of 166lbs like he did in College .. but with both Top CB’s gone, I’m not Note sure I would have Traded up to get D Smith., but I understand why they choose him to go with a Playmaker to help give QB Hurts Weapons as Owner Lurie stated 2 months ago as Howie is under great pressure to please the Fans/Local Media at the top of this this Draft
When you think about it – Howie Traded from 6 to 12 and gained a 2022 1st Round Pick in Return , Tonight He Traded Up from 12 to 10 to a Division Rival and Traded a 3rd Round to do so

Eagles Starting WR’s
Fulgham At X , Reagor At Z and D Smith in the Slot could do some major damage
Or Smith can play the Z Position with Reagor in the Slot
Lots of Options

The eagles all of a sudden have an interesting offense… a Ol with 3 vets who have been pro bowl… 2 WR who can rAc, a Hiesman winner and runner up … Sanders and Goeddert… interesting…I’d say keep Ertz but they won’t…
trade Cox for a 22 conditional second…. his decline is rapidly approaching

They keep Cox for 1 more Season
His Salary and Cap Him make him very difficult to Trade
Eagles need to go Defense 2,3,4th Rounds
And package Ertzand some 6th Round Picks to get a 4th Rounder

Can you dig it?

He moved down and we got paid for it. Then moved up 2 spots to get the guy half the fan base wanted us to pick at 6

Yea “fiiiiiiiiire howie”. What a bunch of sheep chanting that dumb shit. Chant was probably started by giants fans at Mets Phillies game.

Howie dominated the first round both tonight and weeks ago

Huff
Reply to  Can you dig it?

No more feces on wall DORK
Reply to  Paulman Reports

Jeff just write a new article and state that you messed up and acted like a sheep and started on the fire howie train and wanted to chant it at a Sixers game because you acted like a sheep instead of utilizing your own brain and mind.

There’s an obvious trend , picking wide outs whom have performed with qbs in the college ranks in burrows and hurts . I’m ok with the concept , but I wonder how this trend plays out. Howie was nimble and tbh I thought originally that leaving 6 was a blunder , because I stated he put the birds behind the cowboys and the G men. Interesting how he managed to reinsert the birds ahead of the G men. This sets up a narrative for the Giants whom felt slighted by the Eagles losing to Washington last season and eliminating them and now jumping them in the draft together there guy. I’m excited for the defense to now be in focus with Ertz as a chip to perhaps reclaim the Dallas capital we just spent.

Howie just dominated and read the top 5 picks correctly. He knew chase and pitts wouldn’t be there so he traded down.

Then he knew giants were drafting smith so he moved up

Thank you a lot for giving everyone such a pleasant possiblity to check tips from this site. It really is very useful plus stuffed with a lot of fun for me personally and my office friends to search your website on the least three times in 7 days to find out the new secrets you have. And lastly, I’m at all times fulfilled for the mind-boggling strategies served by you. Selected two points on this page are basically the most beneficial we’ve ever had.

I not to mention my buddies were found to be going through the good tricks from your web blog and unexpectedly got a terrible suspicion I never thanked the website owner for those secrets. My ladies were absolutely thrilled to read them and have in effect pretty much been tapping into those things. Thank you for being so thoughtful as well as for using variety of notable guides millions of individuals are really wanting to be informed on. My very own honest apologies for not expressing gratitude to sooner.

Hmm it appears like your website ate my first comment (it was extremely long) so I guess I’ll just sum it up what I wrote and say, I’m thoroughly enjoying your blog. I as well am an aspiring blog writer but I’m still new to the whole thing. Do you have any suggestions for rookie blog writers? I’d certainly appreciate it.

Pretty nice post. I just stumbled upon your weblog and wished to say that I’ve really enjoyed browsing your blog posts. In any case I will be subscribing to your rss feed and I hope you write again soon!

Hey just wanted to give you a quick heads up. The words in your post seem to be running off the screen in Safari. I’m not sure if this is a formatting issue or something to do with internet browser compatibility but I thought I’d post to let you know. The design and style look great though! Hope you get the issue resolved soon. Cheers

Whats up very nice site!! Guy .. Beautiful .. Superb .. I’ll bookmark your website and take the feeds also…I am satisfied to find a lot of useful info here within the submit, we’d like develop extra strategies on this regard, thanks for sharing. . . . . .

Do you have a spam problem on this blog; I also am a blogger, and I was wondering your situation; we have created some nice practices and we are looking to swap strategies with others, be sure to shoot me an e-mail if interested.

This is a topic which is close to my heart…

Thank you! Exactly where are your contact details though?

Outstanding post, you have pointed out some excellent points, I also think this s a very good website.

There are some interesting deadlines on this article however I don’t know if I see all of them heart to heart. There may be some validity but I’ll take hold opinion until I look into it further. Good article , thanks and we want more! Added to FeedBurner as nicely

Hi my friend! I want to say that this post is awesome, nice written and include approximately all important infos. I would like to see more posts like this.

It?¦s actually a great and helpful piece of information. I am satisfied that you shared this useful information with us. Please stay us informed like this. Thanks for sharing.

Greetings from Idaho! I’m bored to death at work so I decided to browse your website on my iphone during lunch break. I really like the information you present here and can’t wait to take a look when I get home. I’m amazed at how quick your blog loaded on my cell phone .. I’m not even using WIFI, just 3G .. Anyhow, awesome blog!

Best view i have ever seen !

There’s noticeably a bundle to find out about this. I assume you made certain nice points in features also.

Some really nice and utilitarian info on this site, besides I think the design has superb features.

excellent points altogether, you just gained a brand new reader. What would you recommend about your post that you made some days ago? Any positive?

Just wanna input that you have a very decent website , I love the design it really stands out.

What i do not understood is actually how you are no longer actually much more neatly-appreciated than you may be now. You are very intelligent. You already know thus significantly when it comes to this matter, produced me for my part consider it from so many various angles. Its like men and women are not fascinated except it is something to do with Lady gaga! Your individual stuffs nice. Always take care of it up!

Enjoyed looking through this, very good stuff, thankyou. “We swallow greedily any lie that flatters us, but we sip little by little at a truth we find bitter.” by Denis Diderot.

I am so happy to read this. This is the type of manual that needs to be given and not the random misinformation that is at the other blogs. Appreciate your sharing this greatest doc.

You could certainly see your enthusiasm within the paintings you write. The world hopes for more passionate writers such as you who are not afraid to say how they believe. At all times go after your heart.