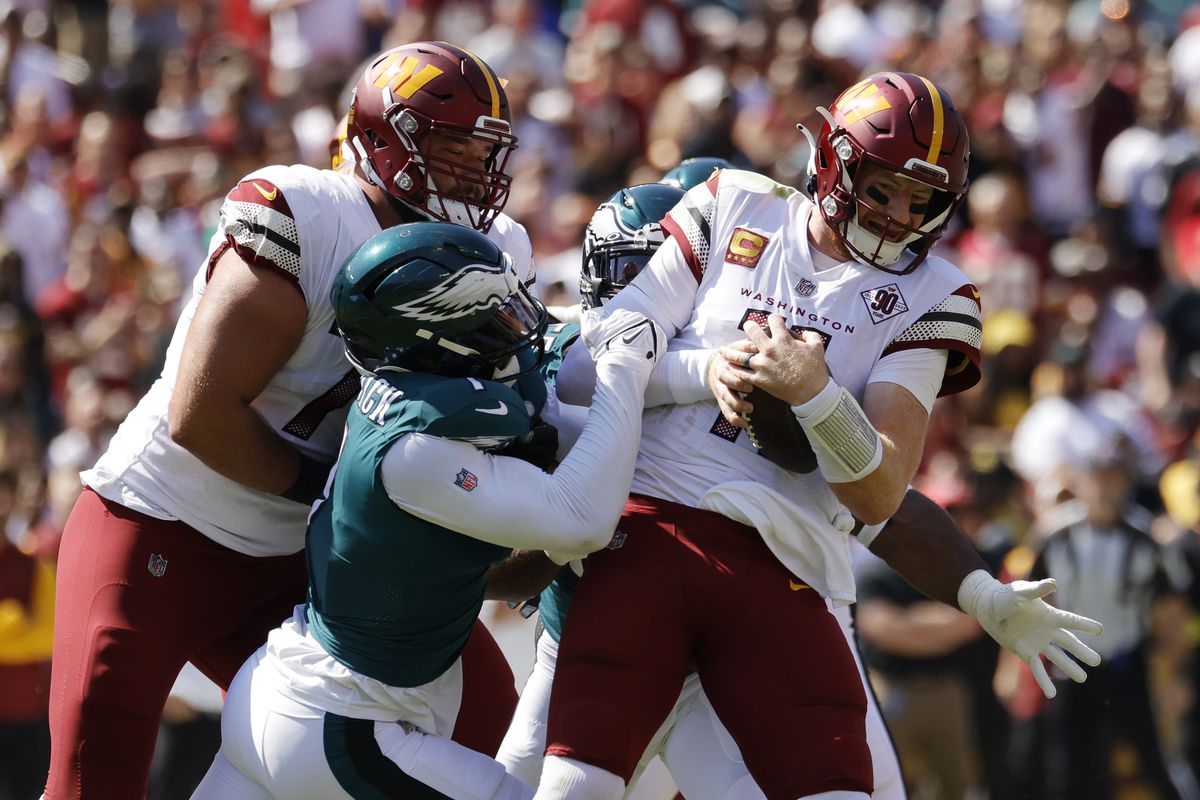 The Eagles dominated the Commanders in the first half both on the scoreboard and on the line of scrimmage for a 24-0 lead.   It didn’t start out that way as both offenses started out slowly and it seemed that we were headed for a low scoring contest. Jalen Hurts and the Eagles offense struggled a bit, then they got in a flow and put together a drive that ended with a field goal.

The Birds defensive line took over the game in the first half with six sacks.  They limited the Washington running game and forced them to throw.  Fletcher Cox, Josh Sweat, Haason Reddick, Javon Hargrave and Brandon Graham dominated the Commanders offensive line and hammered former Eagles quarterback Carson Wentz.  The veteran quarterback refused to look for the short routes, but insisted on hanging onto the football until a big play developed.  What he wound up doing was, getting sacked six times in the first 30 minutes of football.

For the second week in a row, Hurts had an amazing first half.  He threw three touchdown passes in the first 30 minutes of the game, after starting out very slow.  The Birds quarterback continued his amazing start of the 2022 season with tremendous accuracy, while spreading the ball around to numerous receivers.

On the second scoring drive, the Birds were able to put the ball in the end zone on a screen play to tight end Dallas Goedert.  The talented tight end caught the football, maneuvered behind a number of blocks and went into the end zone untouched and standing.  The Eagles have had tremendous success in the first three games throwing screens in the red zone to Goedert.  In the previous two games, Goedert ran the ball down near or inside the five yard line.

The other scores were on a slant route to A.J. Brown, which occurred after Hurts  changed the play at the line of scrimmage, audibled to a slant route to Brown, then connected with him as the big wide out caught the pass with his hands then used his size advantage to carry the defender into the end zone.

The touchdown by DeVonta Smith was a matter of him getting himself in position to go up and catch the ball at the highest point.  He made the catch with the defender hanging all over him.

Smith had an amazing first half with 177 yards worth of catches.  He caught all types of passes, quick outs, curl routes and routes deep downfield.  had a great for us for us have making catches and Smith showed us that despite his slight build, he’s great at going up and fighting for the football at the highest point.

Jalen Hurts Is On Another Level