Hamels Tells Manuel He Wants The Ball In Game Seven

Cole Hamels says he wants that ball for game seven and made a point of talking to Charlie Manuel about it.

Those are the comments which have created all of the controversy. Hamels doesn’t think they correctly communicate his true feelings.

‚ÄúSometimes I might not say the best things or the smartest things, but I‚Äôve learned and am learning,‚Äù Hamels said. ‚ÄúI wasn‚Äôt able to sleep the past couple of nights because of it.‚Äù

He was bothered by it so much that he took it to his skipper.

‚ÄúI went to Charlie just to talk to him because that‚Äôs who I am, and I think he understands that,‚Äù Hamels said. ‚ÄúI just wanted to tell him my true thoughts ‚Äî that I‚Äôll never ever quit. I want to play this game until somebody takes it away from me.

‚ÄúI think Charlie knows me. He has managed me for quite a few years. I think the only doubt it left in people‚Äôs minds were the fans, and you know, it hurts. I love the city of Philadelphia, I play as hard as I possibly can. I might not necessarily have the results that they hope (for), but I know that if I go out there, and do everything I possibly can, and in the end they see (that), then I think they can respect that.‚Äù

We’ll see if Charlie and the fans give him a second chance and forgive him for what he said.

We know how his teammate and fellow pitcher Brett Myers feels about those comments.  He challenged Hamels about the comments and got into a shouting match with him about them. 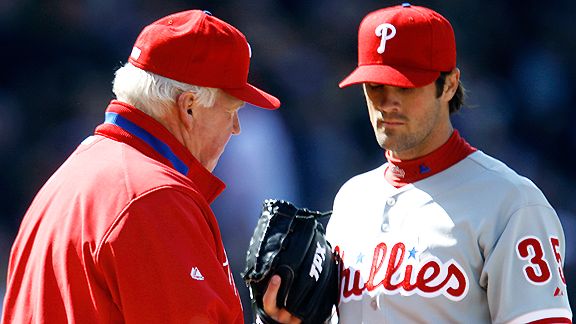