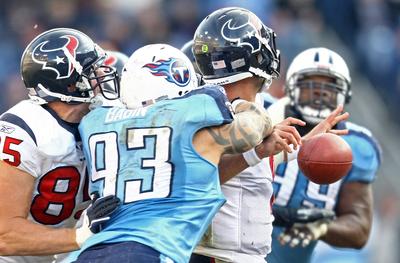 Earlier this week I suggested that the Eagles should take a chance on signing Albert Haynesworth as part of my 5-point plan to revive the defense. This suggestion seems even more likely now that the Eagles have inked defensive line guru Jim Washburn to a multi-year contract. But perhaps I missed another potential signing that could improve the defensive line; ex-Eagle Jason Babin.

Titan’s Insider quotes Babin this week as suggesting he would contemplate a return to Philadelphia because of Washburn:

“It has happened so fast,” Babin said. “He is the guy that gave me the chance. He’s the guy who poured water on me, let me have sunshine, gave me fertilizer, and really let me grow. There’s been no ‘Hey Jason, we want you in Philly’ discussions, but it would be hard for me not to contemplate it if he said, ‘Jason, I want you in Philly. He resurrected me. I’d have to at least give that serious consideration. But Tennessee is where I made a home, my kids go to school there, we live there. So I feel like I’m in a tough position.”

Babin is scheduled to become a free agent again. He posted 12.5 sacks for Tennessee in 2010.

Bring him back and get Haynesworth and get Asomugha. I doubt all that will happen but they need to go all out on defense. Stop it with all the rookie failures. At least acquire 2 defensive players who are already proven at this level. You do that then you can dedicate the draft to the o-line and defensive depth.

With Graham going to be sidelined for the first part of the season…and assuming Babin will sign for not major money, I’d bring him back to play across from Mr. Invisible Trent Cole.

Meh…I like Babin, but if Washburn could do all of what he said with him only God knows what he could do with Brandon Graham especially if Fat Albert ends up in midnight green. I’m not even much of a Brandon Graham if you don’t put a HUGE tackle next to him, but he has some serious potential if you’re smart about filling the gaps (Haynesworth or Antonio Dixon with Stewart Bradley on the right side)

no thanks. If he can get babbin that many sacks, what can he do with Graham??? The DE position is not top need right now. My order would look like this.
1. CB-need a stud here.
2. MLB-time to slide bradley over or move on
3. SS- Id bring back q and try and bring in a FA.
4. Depth- Draft all over the place for depth.

I really dont care if we go 4-3 or 3-4…. the key is we need some players here. Enough with the blown knee guys. We have to assume they will have…um.. ya know… blown knees each year.

Dont know if anyone has seen this yet, but it seems that another name has been thrown into the ring. Dean Pees, the Ravens LB coach. If he comes that would signal the shift to a 3-4. And the article makes a good point. That we have been adding 3-4 talent, and maybe that is why we were so terrible on defense last year. So the shift won’t be so bad like the Redskins. We could jump right in without a hitch.

The article is on profootballtalk

LOOK THAT AINT Happening…….. Babin is going to sign with a team who is going to pay him a ton of money……. He’s was once a 1st round pick who had potential…… I think it will be a team such as the Vikings or possibly Buffalo who will love to have him……..

Get Haynesworth and call it a dominate defense….. Thats all we are missing……

Does anyone know which knee Graham hurt…..was it his dominate knee or the ‘other’ knee…?…been curious about this….hoping it was his ‘other’ knee….

Trent Cole is already a beast, if the Eagles don’t drop him into coverage, line Haynesworth up next to him and solidify the second level on the opposite side leaving Graham free to just rush the passer Washburn’s tutelage should show up in spades. Being as young as Graham is I pretty much expect him to be back in time for summer camp although.

If the Eagles sign any DE in the off season though it should be Ray Edwards, to me that’s a no brainer.

I would love to see haynesworth come in if i had my choice. I know we have a lot of DT free agents I would rather see most of them walk, and bring back one or two for depth. I would love to see a super star cornerback and then if we can draft a solid LB and DE then we have a major improvement moving forward.

Yeah we should switch to a 3-4 so we can make every player on the line undersized and have 4 bad linebackers on the field instead of 3.

Graham is going to be PUPed and Teo is not explosive enough and Victor A is going to be cut so I would bring him back esp since he is on record as saying he would come back with Washburn. The draft has to be focused on RG, CB, and LB respectively IMO since we spent so heavy last on DE and LB last year. Bring him in and swallow the pride to get better with the pass rush. The changes on the D side means that it’s now and not later so waiting for youth to grow up just doesn’t seem like that’s the direction they are headed.

I would rather focus on Haynesworth..That’s an impact signing.

I agree that DE isn’t the worst position on defense but if anyone that Darryl Tapp, Graham coming off injury, Teo who didn’t sniff the field, and Victor “I’m always injured” Abiamiri will cut it you are kidding youself. You still need to make that position better even if it isn’t the highest priority. In case you can’t get the players you want for the other positions.

Graham will struggle to be a top DE due to his short arms…
For a DE, his arm-span and reach are very short which limits his ability to dis-engage blockers easily and being relatively small as he is, When a big OT engages him, he’s done .. He has a high motor and trys hard,. but I don’t see him getting around the issue of such short arms..and don’t think he has the lateral quickness and to play stand-up position out in space in a 3-4 Alignment..
Now if he was coming in on a blitz from the 3-4, I think he would very well, but to be a 3-4 OLB and have to drop in pass coverages is not going to happen with B Graham…

The Eagles need to add at least 2 more qualtiy DE’s..
My choice is Free-Agent DE Cullen Jenkins from the Packers and then maybe go after a Babin
J Parkers days are numbered due to his big salary at his age and Graham will most likely miss the 1st half of the Season and maybe all of it as he rehabs/recovers from Knee Surgery late in the Season
leaving DE’s T Cole,D Tapp,Teo & Sapp and maybe Abiamri … Yikes…

Babin looked pretty average when he was here. Looked like a decent athlete with decent quickness. Deserved a roster spot that’s about it. Not sure i would sink FA money into a guy like that.

cant climb, besides Cole what DE has looked better than average? Do you think coaching may have something to do with it? It’s obvious that our defensive coaching staff was a joke. Did you forget we just hired the coach that contributed to him being a pro bowl player? That could make all the difference. Is that possible? Let me answer that. YES.

They aren’t getting Babin. Babin will want to start and I am sure the Eagles brought in Washburn because of his experience and because they want him to work his magic on the 13th pick from last year (Brandon Graham). Babin would only be coming in as a reserve or a 1 year stop gap/insurance, and I don’t see Babin accepting that. Same with any other big name DE. Graham is the Eagles future as of right now. Have any of you not learned from the past 12 years? Reid is stubborn, and he will stick with Graham, his young draft pick, to give him a chance to show himself. Reid doesn’t give up on a player after 1 year.

I actually think the DE Postion is the Weakest Position on the Team, even weaker than the LB Corps and the CB positions…

DE is easily our weakest position. Especially with Graham out first 8 games. Cole is the only proven player. CB/S is our next weakest postitons. We need 3 of our top 4 to be DE & DB’s

scorpiodsu: The Rory Segrest era confounded me as well. Never understood why guy like that had prominent coaching roles with the Eagles. But i can’t go there on Babin. I agree with some of others. Someone going to give him money and years. I wouldn’t do it. Eagles need to draft better. They are not getting good gas mileage out of all the middle round picks that have stocked up on. They brought in some many DE’s in here the last 8-9 years looking for that Gem. All they have found is a decent Gem in Cole. I’m not a huge Cole guy. I like him though, just don’t think he can reach that true “Game changer” level……

All this D Line talk is definitely warranted, lets just not forget we need to improve the O Line as well..alot has been said about defensive offensive moves, hope the O Line hasn’t been forgotten…

YES Real….we MUST shore up our offensive line, otherwise all we will have is Vick scrambling and getting hurt….we have the weapons on offense, we need the studs up front to do the grunt work

Actually I think the weekest position is safety. Q is average and Allen is average (only because of his inexperience). A close second is kick returner which was probably below average.

A big key to the OL is can Center J Jackson return from his injuries and be able to play again
at a high level.. If so, you have can have McGlynn/Justice battle it out at RG but have to bring in
a big time RT like a Matt LIght who is a Free-agent

An Offensive Line of Peters, Herremans,Jackson,McGlynn, Light would be pretty good
then draft a C/G and OT to start grooming for 2-3 Years down the road..