Aaron Rodgers Will Make The Difference If He Can Stay Healthy 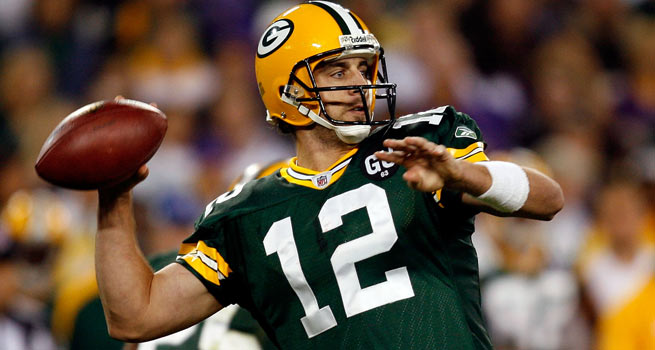 Aaron Rodgers has the sweetest throwing motion of any quarterback in the NFL today and he can make every throw an NFL quarterback needs to make.   The former California Bear has the touch to drop a ball over a defender’s head on a fade route or he can put the mustard on it and gun a slant route in there for a big play.

Nobody in the league reads a defense or gets rid of the ball quicker than Rodgers.  He not only gets rid of the football, the Green Bay quarterback puts it on the money when he lets it go.

I will grant you that sometimes he loses his focus because he’s so good.  I thought he lost his focus in the Bears game.

Rodgers’ ability to examine a defense on the spot and pick up pre-snap reads is phenomenal. You’ll see him come to the line of scrimmage this evening, make some signals with his hands, bark out some codes, the get under center, take the ball from the center and get rid of it in an instant.

He’s the best quarterback in the league versus the blitz, so the Steelers must be careful about blitzing the Pack, especially with all the amazing targets they have such as:  Greg Jennings, Donald Driver, James Jones, and Jordy Nelson.

Next to Michael Vick, Rodgers is the best running quarterback in the league.  He was second only to Vick in yards gained on the ground by a quarterback this season.

I like the Packers in this game if Rodgers can survive.  I don’t like the thought of him tucking the ball under his arm and scrambling against the Steelers.  It’s very difficult to stay healthy if you give James Harrison, Troy Polamalu, LaMarr Woodley and the other Steelers opportunities to hit you.