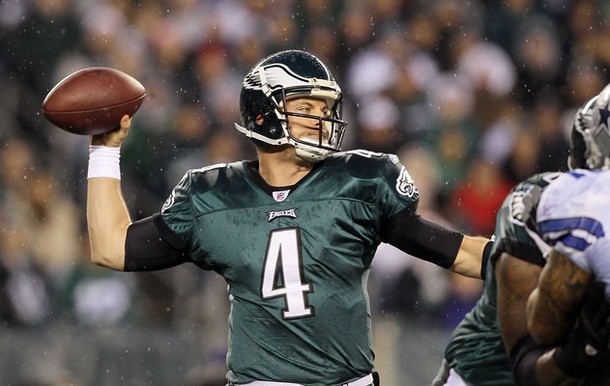 The Arizona Cardinals have never been known as a well-oiled machine when it comes to how they run their franchise. They are almost polar opposites of the Pittsburgh Steelers, and you can see that one team is playing today, and the other is….consulting their wide receiver on their quarterback situation?

According to Adam Schefter of ESPN, that’s what’s happening. Schefter reported on Sunday’s NFL Countdown that the Cardinals are soliciting the advice of Larry Fitzgerald with regards to the team’s next signal caller.

According to Schefter, Fitz’s “first recommendation” was the Philadelphia Eagles’ Kevin Kolb. This might actually mean something, since Fitzgerald is entering the last year of his contract and apparently the team really wants his input.

I could see the Cardinals at least finding out what it would take to get Kolb, but I don’t know if they would part with much. The Bidwells are notoriously cheap.

But, if the Cardinals really care what Fitzgerald thinks, maybe they would up the ante a bit. It’s still not known exactly what the Eagles will want for Kolb, and maybe they aren’t even really sure right now. Surely they have discussed his value with other teams, but you never know what someone will pony up down the road when they feel like they really have to pull the trigger to acquire him.

I still wonder to what extent they are actually taking Fitzgerald’s advice. If they are just curious what he thinks, that’s one thing. If they are really asking him to get involved in personnel matters, then that is pretty bad. Players play. Coaches coach. General managers generally manage (okay that part doesn’t make sense, but you get my point).

Could you imagine Mike Tomlin asking Hines Ward’s advice on personnel matters? I couldn’t. There is a reason they are playing today and the Cardinals aren’t.

UPDATE: In the wake of this report, Ken Whisenhunt issued a response. “Larry and I talked about a number of things,” said Whisenhunt. “I’ve talked to other players as well … Larry is obviously not making the decisions.”

Stars Fall to Flyers 3-1: Who Needs a Shutout Anyway?

Even up Fitzgerald for Kolb

it would need to be Arizona’s 2nd round pick this year and at least a 3rd next year that could turn into a 2nd based on Kolb’s performance.

Asking a WR for advice on personal is almost as crazy as making an offensive line coach the Defensive Coordinator. No NFL organization would be silly enough to…Sorry I thought this was all a bad dream.

We see a guy with a torn ACL he sees a health fastball.

We see a weak run defense he sees a bomb on every play.

We see a all-pro caliber RB he sees a bomb on every play.

We see an offensive guard he sees a guy who can play both guard and tackle and he plays him at center.

We see an defensive end that ends his college career the altime NCAA sack leader. He see’s a outside linebacker responsible for coverage.

We see a WR the size of Pee Wee Herman he see’s the reincarnation of TO.

That’s stupid Micah, if that’s the case, why aren’t the Eagles playing for that matter. They don’t listen to anyone. Big deal, they ask their ONE STAR who would help make them better, so what.

It will take the #5 pick in the draft and a future pick next year. Period. Kolb “by the proffessionals” have stated he is the #1 FA QB on the market. It doesnt matter what you post, a #2 and 4 or whatever other dumb ass scenarios are posted. The proffessional who actually talk to GMs say he is worth much more. I dont want Fitzgerald I have 2 1000 yard recievers lol. Eagle fans bittch when we had no recievers now we have 2 1000 yard recievers and you still bitch. amazing. So they arent the biggest who cares we have other needs. We set records for points and yards. Reciever is the LAST thing we need to address. Backup QB, Oline, D-line, LB secondary, TE, backup RB then WR in that order dont you think?

bsm, quit your whining. Castillo has coached exactly 0 seconds of next season, so you’re pessimism is entirely baseless. None of know what he is going to do with the D. Sure, he’s unexperienced. But you’re whining constantly about this as if the D has already performed poorly starting in September 2011. As far as I know, this season hasn’t even ended until later today. At least quit the whining

The Cardinals will be in play for Kolb & McNabb and others..
Coach Wisenhut is on the hot seat and after a few successful seasons
with QB Warner leading the Cardinals. I think even the knucklehead Bidwell
family knows that you have to have a good,top NFL QB to lead the Franchise
to being playoff contendors.. I don’t think the Bidwell family will want to fall back into medicority and worse like they have been in the past

bsm is at it again! What a post! Were’n’t our receivers singing Kolb’s praises during the off-season. Then the live bullets started flying and everything changed.

The Eagles will be watching the game on TV. Isn’t that a base for pessimism?

In my opinion, Kolb would bring in a much needed high draft pick without moving up in the draft as in days past. We need a lot defensively, as well as offensive line help, and this trade would help facilitate that.

All I will say is, Larry… Be careful what you ask for.

Chuck, you are the type I just posted about, you know more than Fitzgerald, NFL brass, what is your agenda

Jakedog- players can be wrong some times. Just ask the 3 guys that went down and begged favre to play this year.