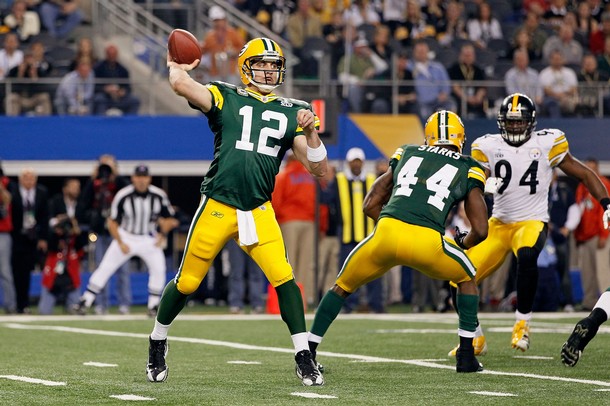 The Pittsburgh Steelers had grabbed the momentum in the second half of yesterday’s Super Bowl.  The Packers had the ball and were clinging to a three-point lead late in the fourth quarter.  It was third down and long.

Aaron Rodgers dropped into the pocket and threw a strike on a seam route to wide receiver Greg Jennings.  The throw had to be perfect and perfect it was as Jennings turned to find the ball coming directly into his hands.

This was the type of game which, Rodgers the former number one draft pick from the University of California played in front of a huge national television audience.  He had five or six passes dropped yet still managed to complete 24 of 39 throws for 304 yards and 3 touchdowns for a 111.5 quarterback rating.

The biggest achievement by Rodgers during the contest against an outstanding Steelers defense may have been what he didn’t do.  The very athletic quarterback didn’t even come close to turning the ball over and when you compare it Ben Roethlisberger and the Steelers offense’s three turnovers, you see why Green Bay is celebrating it’s fouth Super Bowl title.

You can legitimately say that Rodgers, who was the Super Bowl MVP, is the league’s best quarterback.  He eliminated any talk of the Packers having made a mistake by letting Brett Favre go.  He has matched Favre in Super Bowl titles and did something the veteran gunslinger never did, he won the MVP award in the Super Bowl.

“Fun night,” said Rodgers after the game. “It is a dream come true. It’s what I dreamt about as a little kid, watching Joe Montana and Steve Young, and we just won the Super Bowl.”

He made a great throw to wide receiver Jordy Nelson on a fade route over Pittsburgh cornerback William Gay down the right sideline.  Nelson who had dropped a pass on the same route on the first series which the Packers had the football, was able to go up and pull the throw in on a nice catch.

Rodgers went to Nelson more than any other receiver.  He targeted him 15 times and Nelson finished the game with 9 catches for 140 yards and one touchdown.  On the final drive for a score by the Packers, Rodgers put the ball right on the money to Nelson as he ran a crossing route, but the wideout dropped the ball.

The talented quarterback showed tremendous confidence in Nelson because on third down with the game on the line, he came right back to him versus a zone blitz and the wide receiver was again running a crossing route.  This time he held onto it and took the pass all the way down to the Steelers eight yard line.

It set up a field goal and put the Packers ahead by six points with just two minutes to go in the game.

All year long, Rodgers number one receiver was Jennings and again he made some big catches for Green Bay.  In the second quarter, the talented signal caller made a pinpoint throw to Jennings into the weakness of the Steelers pass coverage which was down the middle of the defense in back of Pittsburgh middle linebacker James Farrior and in front Steelers safety Troy Polamalu.

Jennings came off the ball, avoided Farrior before heading down the seam and pulling down the pass before getting popped by Polamalu.  Rodgers had no room for error and he didn’t need any with the throw to Jennings.  The throw resulted in a 21-yard touchdown pass play which gave the Packers a 21-3 lead with a few minutes left to go in the first half.

Have You Noticed That Andy Reid Hasn’t Been HImself Lately?

Ben Roethlisberger Was Flat Out Terrible In The Super Bowl