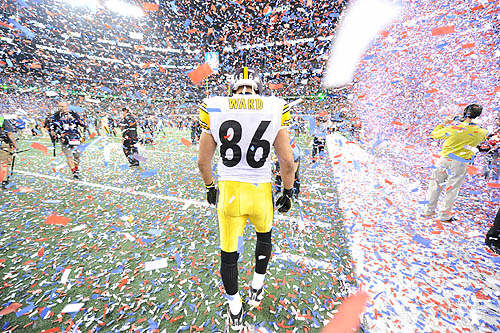 When the Steelers got the ball trailing by six on the last drive, I was yelling to the Green Bay secondary, “Double Hines Ward and watch Wallace going deep”.  I was sure they were going to use Ward and their tight end Heath Miller to keep the sticks moving and send speedy wide receiver Mike Wallace deep to try and catch the Packers secondary napping.

It seems that Ward thought the ball was going to be coming his way also and he seems to be taking a shot at his quarterback for not giving him a chance.

“I’m thinking deja vu, here we go again,” Ward said in the Pittsburgh Post-Gazette. “Two minutes, let’s go down there. I really felt like I was in a zone, that anything that came my way it was going to get caught no matter what. I didn’t get an opportunity. I would like to have gotten opportunities [on the final series] but it didn’t happen.”

I saw Mike Mayock on NFL Network after the game breaking down the Wallace’s routes on that last series and he eviscerated him.  On each play failed to focus and execute his route properly.  On one play the youngster didn’t know what route he was running.  On another play, he pulled up rather come off the ball full speed and beat his man deep.  On the final play, Wallace came off the ball half-speed and allowed cornerback Tramon Williams to sit down on the curl route.

While Mayock was going through all of this focus on Wallace, I was saying, why is Roethlisberger throwing the ball to Wallace on every play in this situation.  If you see the kid is being overcome by the situation, you tell him to go deep and work with Ward and Miller underneath.  You’ve got to move the sticks.  Forget Wallace.  Look up Ward.

Phil Simms Apologizes For His Threats To Desmond Howard

Yeah, that’s just nuts G. Hines Ward was a freaking Super Bowl MVP… he understands clutch in that game. Roethlisberger must’ve been pissed at him or something…. it’s just weird.

Roethlisberger is overrated? WTF are you smokin? He’s no Tom Brady but the dude is a winner, he can take a hit, and knows how to work over a defense. You people on here are out of touch with reality.

Special teams is a fault more. 2 minutes 6 seconds on the kick off and the clock doesn’t start until Pitt touches the ball. Redman must get the ball and go straight and run through the hole if it’s there, did the special teams coach make it clear to him? It would be 1st down at the 28 with 2:02 left in the game. He ran sideways causing them to lose the 2 minute warning and got a penalty that push them back to the 12. The game was lost there because they had 1 time out.

You need to stop beleive what the media makes someone out to be and see things for yourself. Read the article below and maybe you will see why he is overrated. To be honest Rothlisberger would of never came close to even making a superbowl if he didnt have a great defense and good running game during his career as a steeler. He is a playground QB with a reuptation for being clutch. On top of that his playoff stats are awful. I think Rodgers has the same or more TD passes in one superbowl than all 3 of Rothlisbergers. You tell me now is Rothlisberger really that good or is it the team that is really good. I compare Rothlisbeger to Rypken and Doug Williams of the Redskins super bowls of the early 90’s. Good enough to help a great team win a superbowl!

I saw Playbook and wondered the same thing. Hines Ward has every right to be upset.

What is weird Steelers did not play steeler balanced football…..Most SB teams run ball(23 out 25) almost 30 times….but all 25 of last 25 ran ball(balanced game to get there especially in playoffs…..PACKERS RAN 25+ IN 3 OF 4 LAST PLAYOFF GAMES….if u remember Starks had 125 yds ave 5.7 yds against us….the point is reid would not do that……SB teams run to get there and usually in SB too look it up

If Steelers do not have a balanced attack then they have no chance of winning another example as to why Big Ben is overrated. If I was the Steelers and I could take a QB to fill Rothlisbergers spot it would go……

All of these Qb’s would of won the superbowl this year if they were on the Steelers. Once again proves that he is overrated. the great Defense and great running game has protected Rothlisberger from people really seing his flaws and true value!

Excellent point Jphalines..
The entire final sequence of plays and the early burning of 2 of their Time-Outs were un-Steeler like, but that Special Teams blunder cost them at least a time-out and 15 yards of field position.. I don’t think the annoucers even pointed that out.. The better team won and the Steelers picked a bad time to play one a pretty bad game and it’s amazing they still even had a chance at the end when losing the Turnover battle 3-0 to the Packers

To paulman
You can say the same thing about the packers. With all of the penalties and dropped passes (many would of been for TD’s), bad calls against them……the outcome could of been easily 17-24 point win for GB. Steelrs got lucky to have a chance.

No doubt Godson,
If Jones hangs onto that dropped pass in the 2nd Quarter and runs it in for a TD which it appeared he had clear sailing, it’s 28-3 and game is over..
The Packers were the better team and won fair and square, no doubt
Ther Steelers had the momoentum the 3rd Period and were climbing back in
until that Mendenhall Fumble stopped them dead in their tracks and they were not the same the reaminder of the game while the Packers appears to have gotten a 2nd wind after that recovery and took control from there on out

What does your stats mean? That is an awful comparison. I try to explain to you guys that cannot see the truth that you can place about 8 QB’s on the Steelers team this year and they would of won. Your comparison means nothing to that argument. I am not comparing those teams and their QB’s to the Packers D but trying to imply that a top 8 QB on that Steelers team would of resulted in a Super Bowl. Rothlisberger is OVERRATED!

Stats mean bunk…
There was 1 Winner (GB Packers-led by QB Rodgers)
and 31 other losing teams.. Stats are nice and can be manipulated a 1000 ways, bottome line, Rodgers & Packers won the Big Game and everyone
didn’t.. Until next year..

THESE stats mean i wouldn’t want Cutler on my team