Cam Newton Talks About Icon Comment, His Dad, But Not Florida Scandals 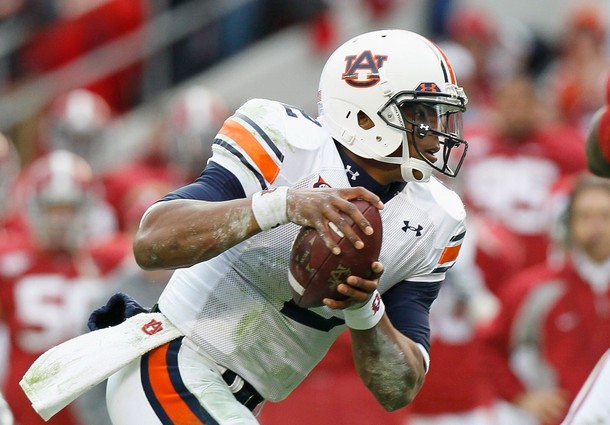 Media people were sandwiched into a conference room in Indianapolis at the NFL Combine waiting to get the chance to ask some question of Heisman Trophy winner Cam Newton. The star quarterback came into the news conference with a prepared statement which focused on his appreciation for being in the position to be drafted into the NFL.

He delivered it then allowed the reporters to ask him some questions.

He began the Q & A part of the conference by answering a question about Warren Moon. Newton talked about how he has helped him. Newton says he’s a special person to him and has been willing to talk to him about all types of subjects. According to Newton, Moon has been there to look up to and be a person to he can get advice from.

As for the entertainment and icon comments, Newton said he was misunderstood, and faulted himself for not being clear.

Newton pointed out that just 365 days ago, he was at Auburn taking classes and the Auburn football fans had no idea what was ahead for them.

He said he loves working out in San Diego, (where he’s been training at for the last couple of months) with the great weather while he trying to become the best player he can be. Newton said he was looking for to coming to the NFL Combine and getting the chance to compete.

Newton said he’s not sure if people take his confidence as cockiness, but that attitude was instilled in him when was a child.

“I”m a confident person and it was instilled in me at a young age,” Newton said..

He said he will continue to keep working on his craft, so he can get better. Newton then used his name in the 3rd person and talked about staying in the film room and on the chalkboard to prepare to be his best.

“I’m a competitor, so I’m going participate in all the activities at the Combine, and I will be workout at the Auburn Pro Day”, Newton said to the media gathering. He said he decided on San Diego as a place to train because he wanted to be isolated so he could be focused.

He said he loved waking up to see the beautiful San Diego weather. The Heisman Trophy winner says he’s focused on football. “Football is my No. 1 priority,” said Newton. “I want to make that perfectly clear.”

and it’s a dream come true to be competing for a spot in the NFL.

It’s been a challenge, has a great relationship with his father, brought he and his father closer together.

He was asked about his relationship with his father and he replied, “My father is like any other father that wants the best for his son. He wants to see me succeed in every way possible”. This could be a problem because some teams will look at his dad and think about him trying to get $180,000 from Mississippi State.

Cam talked about walking through the halls and seeing the best players in the nation. He said he loves to compete with the likes of Blaine Gabbert, Da’Quan Bowers, A.J. Greeen and etc.

In one big moment during the news conference, Newton was asked whether he stole a computer at Florida, He deflected the question by saying he was not going to talk about the mistakes he had made at Florida, Newton said he wouldn’t do those same things which he did at Florida, but was focused on the future.

He finished his comments talking about Peyton Manning and Tom Brady and the way they prepare for the game. In his words, they may not run a faster forty, but you’re not going to outwork them. He wants to follow their example in his preparation.

The Top Five Guards In The NFL Draft

Can’t wait until he’s drafted by someone, I have a feeling we will be hearing
Cam Newton this, Cam Newton that over the next 2 months…
Physically and QB wise, he reminds me a lot of Culpepper and McNabb when they came out of COllege and honestly , probably has better technique than those 2 had at this stage.. If he gets on the right team with solid QB Coaching, he will be a Good QB for a long time in the NFL…

I highly doubt that any team cares about the $180,000 this is the NFL nobody cares about Reggie Bush and his penthouse except for the NCAA the most hypocritical organization in America. Few Qb’s are as physically gifted as Newton and with Mike Vick exploding this year teams are not likely to let a guy like this pass them by.Hello Cardinals,Vikings,Redskins,Raiders,Titans.

Think about Newton to Bryant for the next 7 to 8 years? Along with Felix Jones? Scary for Us eagles fans.