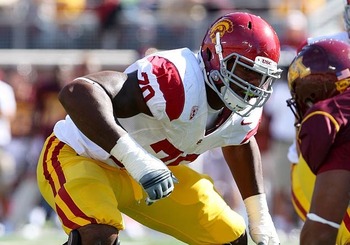 The big fellas on the offensive line are working out this morning in Indianapolis at the NFL Combine. They ran their forty yard dashes as well as some agility drills.

USC offensive tackle, Tyron Smith, who had been so impressive when he weighed in yesterday dropped out of the workouts today. He had an athroscopic procedure done on one of his knees recently and the knee had swollen up, so he’s not going to workout this weekend.

He will workout for the scouts at the USC Pro Day which will occur on March 30. He has plenty of time to show what he can do, so I don’t think he’ll be penalized for the delay.

Highly rated offensive tackles Gabe Carimi of Wisconsin and Anthony Castonzo of Boston College have been performing well in the drills, so far this morning Both of these big guys are projected to go in the first round and they’ve shown the fact that they have been schooled very well in their techniques. They’ve got good feet and have shown the ability to change direction while keeping

In the mirror drill you could see their patience and balance which stood out. An offensive lineman can’t be too aggressive as a pass blocker. Castonzo and Carimi look like they’ll be ready to start and play in their first year which is expected of a first round offensive line pick.

I believe both of them have helped themselves with their workouts.

Jason Peters’ Condo Is Burglarized For $60,000 Worth Of Items

The Top Five Guards In The NFL Draft

I’d bet my right arm the Eagles draft an OT with the first pick. Nice to see we’re on the same page G. As you guys say here in the states, you the man.

I hope the do draft an OT with the first pick, I just want them to keep him at OT and not play the shift game

He better perform on his pro day or everything that he has been doing to make him skyrocket up the boards is gonna be for naught…… Although, that might be a good thing for the Eagles. They could really use this guy. He will be a stud. I am sure he will see some slippage of where he is projected til his pro day.

N Solder is too thin up top and doesn’t have the upper body strength I believe and will drop down towards the end of 1st Round
.. Constanzo,Carimi and T Smith, Pouncey seem to be the Class of the OL and will go anywhere from the #12 thru the #24 Selections