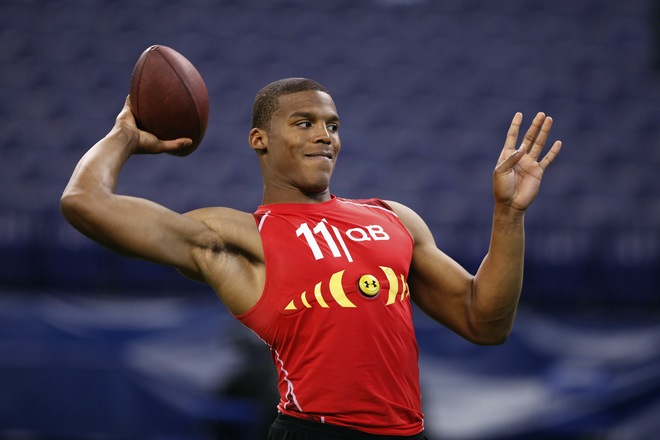 When Cam Newton made those statements a couple of weeks ago about being an “entertainer and an icon” 31 General Managers in the National Football League, said “Oh No”, but one said “Oh Yes”. Only one of the NFL’s General Managers is also the team’s owner and that is Dallas Cowboys head man, Jerry Jones and I think he’s probably going to be the guy who drafts Newton.

Only one team in the league has to fill up a more than 100,000 seat stadium, as well as induce another 20,000 dopes to come to the stadium and pay to watch the games on big screens in the parking lot and buy more beer and liquor from Jones. He doesn’t just need a good quarterback like Tony Romo, he needs a personality a charismatic figure who will dominate the national headlines like Newton.

You know Jones was angered when Michael Vick came to his new stadium and led the Eagles to victory while dominating the headlines in the league. Vick had owned the headlines all season long because he like Newton is a walking-talking controversy that gets the attention of everyone each time he walks into a room.

Jones will keep Romo around and give Newton some time to learn the pro game, then turn him loose on the NFL.

know that they were meeting with him.

Jones’ head coach is a quarterback coach, Jason Garrett, so you know he will have no problem giving him the responsibility of developing Newton.

Newton had a terrible day trying complete balls to receivers at the NFL Combine, but so what. The kid made a mistake by deciding to

throw there because he didn’t know the speed of the receivers because he had never thrown to those guys. It was understandable that he overthrew them, but so what. Jones was cheering after every throw that hit the ground.

He tested well by running the 40 yard dash in 4.59 seconds. He tied for which tied for the best broad jump at 10 feet, 6 inches and had a 35-inch vertical jump. The guy is 6’5″ and weighs 250 pounds. He’s got great feet, leadership skills and desire to be the very best.

Remember you heard it here first.