Remainder of Schedule Could Slow Down Flyers for Playoffs 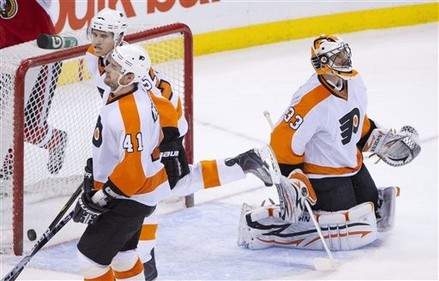 On paper, the remainder of the regular season for the Philadelphia Flyers should be a walk in the park. They will face 13 different teams over the course of the final 20 games, of which only 5 teams are currently playoff bound- the Pittsburgh Penguins (2 games), the  New York Rangers (2 games), the Boston Bruins, the Washington Capitals, and the Dallas Stars.

Against the remaining teams, which are either on the bubble or in the basement, the Flyers have a 20-3-1 record. Assuming the Flyers win half the games against contending teams (let’s say 3) and win 75% of the others (let’s say 9), the Flyers would end the season with 110 points, enough to challenge the Vancouver Canucks for the President’s Trophy.

For the record, the Flyers have never won the President’s Trophy. They’ve matched or exceeded 110 points seven times, but not since the 1985-86 season, which also happened to be the year that the Trophy was created.

Some might view this as a good sign, but since the 2004-05 lockout, three teams who won the trophy have lost in the very first round of the playoffs. Only the Detroit Red Wings were able to hoist Lord Stanley, and they’re about as elite of an NHL team as you get.

What coach Peter Laviolette should be concerned with down the stretch is the team’s ability to stay competitive for a full 60 minutes. Against teams like the Boston Bruins, it shouldn’t be that difficult because they’re an exciting challenge. It’s the teams vying for last place that pose the problem.

Saturday night’s game against the Ottawa Senators, who iced no less than eight rookies, should have been an easy two points. Instead, they were outworked and outhustled after the first period.

By all indications from the reporters who’ve been at practice this week, Laviolette has been laying it into the team on the ice to whip them into shape. Having the fear of God drilled into them is certainly one way of preparing them for the games ahead, but if the Flyers get too comfortable on top and begin to slide, they could lose their confidence at exactly the wrong time.

Hopefully they find whatever it is that pushes them to stay competitive, be it home ice advantage, personal pride, or money on the board.

For Flyers updates and post-game videos (RE: Thursday against the Toronto Mapleleafs), you can follow me on twitter (@JoshJanet).