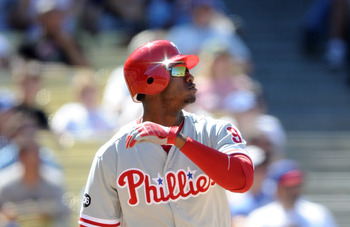 Coming into Spring Training, the number one question for the Phillies was who was going to replace Jayson Werth and his big right bat in right field.

The Phillies were hoping it was going to be Dominic Brown, the one prospect that the team refused to include in any trade while they were busy collecting Ace’s like it was a card game. But while it is only 3 games into the Grape Fruit League for the Phillies, Brown has done nothing to win the job so far.

Brown has been up to bat more then any other member of the Phillies this spring, but has done the least with those opportunities. Brown has as many hits as me and you do this spring, managing only 2 walks for an on-base-percentage of .182 and a batting average of .000. Of his 9 at bats, 6 have ended up with him striking out, meaning that Brown has only put the ball into play only once this spring.

While Brown has done nothing to win the job this spring, Ben Francisco has done everything he could do send Brown back down into the minors to start the season. Out of all of the every day players this spring, Francisco has the highest batting percentage, averaging .571 so far. His slugging percentage is .667, over three times that of Browns. He also leads the team in RBI’s with 4, and has been the only member of the Phillies to go yard so far this spring. Francisco also has a double and a triple in his 7 at bats.

Francisco also has another advantage over Brown: he is a right hand bat in a line up filled with lefties. Brown bats left.

There is still plenty of games to be played, and Brown is the man the Phillies want to win the job. But three games in, with Francisco swinging the bat the way he is, Brown needs to step up before he is sent back down.

Remainder of Schedule Could Slow Down Flyers for Playoffs

D Brown is just not ready for the MLB a this stage of his development,
He needs a full Season at Triple AAA (400 at Bats) to work on his game,
he also needs to work on his Defensive positioning, picking up the ball,
hitting cutoffs,etc,etc for he has lots of raw talent but needs some polishing offenseively and defensively.. I think the kid has too much pressure to have a good Spring Camp.. He’s just not ready ..

I don’t like the swing, too slow, somewhat loopy, not that quick, powerful stroke like utley has

Not ready? He SUCKS. All this hype for this guy. Its one thing to struggle at the plate, I get it. But when he was put in right field he looked like he never played the position before. Right field is right field no matter what level you play at. He looked non-athletic and pathetic. How much more seasoning does he need? What raw talent are you talking about Paulman? He cant hit and he cant field what a wonderful combination. lol

The Phils 5 Outfielders for the 2011 Season
Ibanez,Victorino,Francisco,Gload with John Mayberry Jr & Delwyn Young fighting it out for the final OF Spot..
I think D Brown gets sent down to AAA to hone his skills

I said all off-season that Brown wasn’t ready and the Phils should have pursued
Free-Agents Matt Diaz or Jeff Francouer who were both signed for chump change by the Pirates and Royls respectfully.
Both Diaz/Francouer are good Fielders, Right-Handed Bats and good locker-room Profesional MLB players..
I am downgrading this Phils Team to 92-94 Wins.. Their 8 man everyday line-up is not as strong as many in the local media/Philly fans think…

92-94 wins still good enough for the division win, then defense and pitching to series victory

92-94 wins? they won 97 games last year with a much worse pitching staff, and an insane amount of injuries.

2011 Phils Team
Overall and Outfiled Defense is weaker.
The Bullpen is filled with Pitchers with recent injuries
The IF is a year older and has Polanco,Rollins,Utley all coming off injuries
The Hitting is not as strong and the 8 Man Batting line-up is not very balanced
Why does everyone think this Team is better than the last 2 years…
The Reds,Braves,Padres,Giants,Cubs,Brewers have all improved
The Phils I would say took a step back as a team…

up here in reading we thought michael taylor was the man . d brown ended up being the man , but taylor we thought was the next guy . and since hes gone we haven’t heard that much from him. but he could crush the freakin ball,.

The Phillies have done alot of things right. Keeping Brown while letting other top prospects go may not be one of them. Part of being great is handling the pressure. It appears as though he can’t handle it so far. It has to be nerves because he obviously showed something to have been rated so high. He needs to see a sports psychologist.

so they are replacing werth with francisco, and kendrick with cliff lee. yeah the phillies haven’t taken a step back. everyone on every team is a year older. are you saying you think they will have even MORE injuries this year than last? because that would be almost impossible to achieve. so the defense will be slightly worse in RF and the same at every other position. one spot in the rotation is infinitely better with lee vs. kendrick. didn’t you also predict the braves to win the division last year, and yet the phillies had more wins than any team in baseball?

That’s what I’m Saying Hot97x
Cliff Lee starting out with 9.00 Era after 1st appearance
Their OF defense is one of the worst in the NL
Their Bench is one of the weakest in the NL
Their Infield is a year older and all coming off injuries and surgey in Polanco,
Rollins and Utley and 1B R Howard is one of the worst fielding 1B in the NL
If you are counting on Bullpen pitchers Baes,and Romero & Contreras to remain healthy..Good Luck and then you have the aging,often injured Closer in Brad Ligde..
This Phils have 4 very good Starters but that’s about it if you ask me.. lots of question marks up and down the line-up which will struggle against teams that have a lot of good Left-Handed Pitching (like the Red,Dodgers,Giants do)
Their saving grace is that they are playing in a very weak division as Florida is rebuilding, NAtionals are young and improved but have no Pitching and the Mets are the Mets so outside of Atlanta, no real solid competition for them within the Division.. The Central is stacked with the Red,CArdinals and teh improved Brewers and even the Cubs had added good players and then the West still has the Giants (which has a better Pitching Staff than the PHils from top to bottom) the pesky Padres who added some bats to their lineup and the improved Dodgers and Rockies.. Everyone thinks the Phils are going to walk into the WS and I am here to tell you that they are probably the 3rd/4th Best team the in NL unless they all stay healthy all year which never happens and unless the injured players from last year play like they did in
2008-2009 (Ibanez,Rollins,Victorino & Utley) which won’t happen either for they are getting old,injured and have lost some of that drive that got them their in the 1st place…