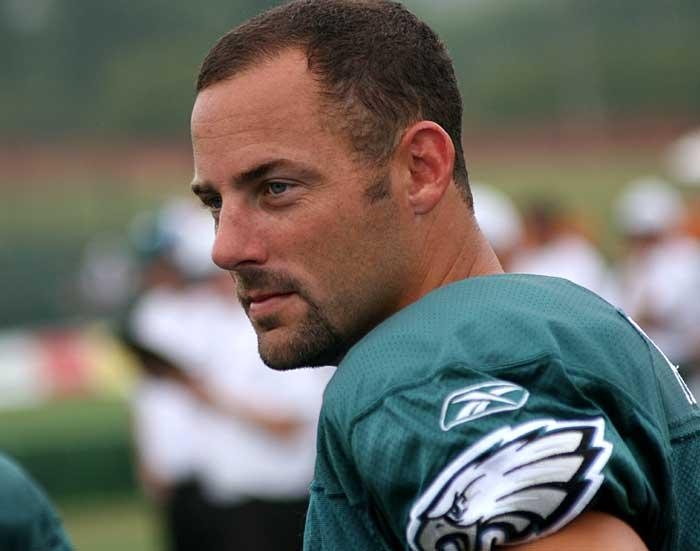 Eagles Pro Bowl kicker David Akers says he wants to remain a Philadelphia Eagles but his refusal to sign the transition tender that the Birds have offered him might affect the way the team’s front office feels about him. Akers knows the Eagles history. Usually when players turn down the final offer, they wind up being traded or released. That might not be the case this time, but it has been the history of the way the Eagles have dealt with veteran players.

It’s not news that Akers doesn’t like the transition tag, but it is news that he won’t sign it. Akers’ agent Jerrold Colton told Philly.com that the Pro Bowl kicker won’t be signing the transition tender. Colton said he and Akers continue to want to workout a long-term deal with the Birds.

I had reported after the playoff loss to the Green Bay Packers that Akers had turned down a proposal from the Birds.

Turn out the lights, the party is over for David Akers..
No one insults this Front Office and gets away with it..

If he wants a ring he should sign somewhere else and come back when Reid is gone.

If he really wanted a Ring Ozz, he would have made both those FG’s versus the Packers.. He has come up small the last few Post-Seasons
I say release him today and move on with another Kicker..

He has come short a few times but he is about as good as it gets. Im not trying to go back to Boniol. I might be spelling his name wrong but u get the point. That kicker we got from dallas 13 14 years ago

Chris Boniol … what a stiff that dude was. Cowboys laughed all the way to the bank when we took him off their hands.

I don’t really understand this whole “tag” thing, so I’m not sure what this really means. From my understanding, Akers not signing it really gets him nothing right? The Birds still control his rights by placing the tag on him and he can’t go anywhere else whether he signs or not.

Basically, Ian, Akers agent wants a bidding war for his services.By giving him the transition tag, the Eagles have 7 days to match any offer another team might give him–if they don’t, then he goes to that other team with no compensation due the Eagles. Once he signs the tag, he remaiins with the Eagles and no bidding war. I have yet, in the history of NFL FA, seen a bidding war over a kicker. I think the Pats gave Vinatari the transition tag, the Colts signed him and the Pats didn’t match. If someone wants to pay Akers 2-2.5M per year to take him, at 36, then they can have him. I think his agent is overreaching–severely.

I see it this way…… If he goes than thats what it is…….. He did wonders here in Philly for many years and was clutch for most of them……. But he’s not clutch like he once was behind 50 yards or more…….. Between him and Jankowski are two thats left of left leg kickers in the NFL and have been on there team for a # of years…….. Janakowski hasn’t lost his power with his leg but akers has lost a bit with his!!!!

Good for you, David. You’ve been our most consistent player for about a decade. You deserve whatever you can get.

I love Akers, but it seems like he is looking for a HUGE payday, and although I think he is one of the best kickers in the league…… There is only so much I would pay for any kicker, and I believe that Akers is asking for more than what I think the Eagles should pay. Therefor, let him go. Eagles will probably end up letting him go anyway.

Do you have any idea how many points Akers has scored? You’re talking about getting rid of the team’s top scorer because he missed a couple (after having received terrible news about his daughter).

Better yet, do you know how dramatically the offensive game plan is affected when you can’t count on your kicker? What do you do on 3rd and 3 from your opponent’s 33 yard line? It all depends on who’s kicking for you.

Suppose we decided to cut you after a few bad posts. You’d have been gone after your first three. lol

Ha drummer – can you imagine how many ‘characters (letters and/or spaces) he has typed on this site!? I wonder if it out numbers the same stat for Garry himself!?

For the record, G-Man is paying me by the “characters”…
(Dave Akers agent is also my agent)

But back on comments,
John Casey is also a left-footed kicker who has kicked for the Panthers who has been then 15-16 years and may be one of their original players from 1995

Changing the play on 3rd & 3 from 30, Yes the Eagles run the ball and fall 1 yard short and call in Akers to put up 3 points which is good for the kicker
but bad for the team.

what does left or right footedness have to do with anything? And why are you listing kickers?

you still didn’t get the point, drummer was arguing the value of a high percentage chance of a field goal, not a field goal versus a first down.

Akers is a greedy player….the Eagles offered him a multi-year deal for $3m per season in December and he turned it down. He sucked the past season and is on the decline… screwn him!

That was a good one drummer…… I think we should cut Paulman.

Although, with your “theory” on how it would change our gameplan in certain situations……. I don’t think that is necessarily a bad idea. I think they played it rather safe a bunch of times because they know that Akers is almost automatic. Imagine if they didn’t have him and are forced to go for it more on 4th downs? I wouldn’t mind that. I think the Eagles need to get more ballsy.

As long as Akers doesn’t sign the tender he can’t negotiate or talk to other teams. So I’m not sure how this helps his case.

Akers and his Agent definitely picked the wrong Off-Season to refuse this tender.. He will be blackballed and end up not kicking for anyone next Season
if there even is one.. Stupid is all I can say..

Some of you on here have no appreciation for Akers, past and present. If you find a replacement, he will not be as good as Akers… period! Then we’ll gripin’ again. You’re talking about a guy who has HoF kicking stats. Part of a K’s job is on-sides kicks with considerable skill… it’s not just making FG’s over 50yrd. If this team gets it’s offense going and solves the RZ mess, there’ll be no need to have to make 55-yarders. It’s not easy kicking in CBP when wind comes in that one end.

iggle, please bro. Just because he’s been a good kicker doesn’t mean you have to disregard him acting like a baby this entire offseason. You can do both…. acknowledge he is a great kicker and that you don’t like the way he’s acting. The HOF stats you think he has, mean nothing RIGHT NOW. I’m not saying I want him gone, because I don’t but acting like the team lives and dies with Akers is dumb. For the last few seasons he hasn’t been clutch.