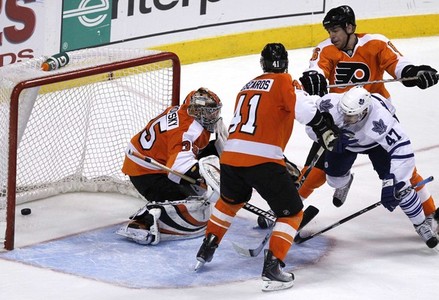 The Flyers once again faced a team trying to squeeze their way into the playoffs and couldn’t match the desperation or intensity to get the win, as the Toronto Mapleleafs outworked the Flyers in a 3-2 win at the Wells Fargo Center.

The Flyers were down Dan Carcillo, Jeff Carter, and Darroll Powe thanks to the flu, but regained Blair Betts and Chris Pronger. Adirondack Phantom Ben Holmstrom was recalled in the afternoon as a result and made his NHL debut. Pronger didn’t attribute the loss to the absence of any teammates, saying, “At this time of year, everybody’s gonna have injuries or what have you. I don’t think that played a part of it.”

The first issue that stood out from tonight’s loss was the wave after wave of penalties that crushed any momentum the orange and black tried to build. In particular, Sean O’Donnell and Andrej Meszaros played arguably their worst game of the season. If they weren’t playing loose with their sticks, they were turning the puck over to the Leafs in their own zone.

When asked if he was unhappy with the penalties (Meszaros’ name came up), Laviolette responded, “Not really. You know, you get punched in the head and you punch somebody back, you’d expect that they would both go [to the penalty box]. It seemed to be hooking and holding and slashing on one end… we’d like those calls down the other.”

Laviolette went on further to explain that he didn’t think the calls were necessarily wrong for his team: “We weren’t complaining about the ones [where] we went to the box. There were certainly enough of those.”

In a candid interview after the game, captain Mike Richards took blame for the too-man-men penalty at the start of the third period. He wasn’t looking to make excuses and took a lot of the heat on himself. “It’s good to see the penalty killing do so well, but tough to see that we had to give them that many penalties.”

Holmstrom had a very active NHL debut, as he was utilized heavily on the penalty kill in the first period. He has done well in that role with the Phantoms, but looked out of sorts tonight as the penalties piled on. That’s not meant to be a snarky put-down of “Big Ben,” but an observation that he isn’t ready for the NHL yet.

The second issue that stood out was the repeated mental lapses by the majority of the team throughout the game. The score could have been much more lopsided had goaltender Sergei Bobrovsky not stood on his head.

“We’re at game 63 or 64 here… we’ve got to understand what we’re doing in our own end, what we’re doing on draws and all the rest of that, and get on the same page,” said Pronger. “I don’t think it’s acceptable at any point in the season, let alone right now.”

Offensively, the team performed well. Versteeg looked like a new man tonight, scoring both of the Flyers goals off of crisp passes from linemate Mike Richards. That line with Andreas Nodl looks like it’s finally clicking, as did Versteeg’s PK unit with Nodl. Facing his former team, Versteeg would have liked to get the win, but had to settle with having a good game for himself.

“It would’ve been bittersweet, I’m not gonna lie,” said Versteeg. “I thought in the last six games, we’ve had a lot of chances… I don’t know why they’re not going in. For tonight, a couple of them went in, but [we would’ve liked] maybe one more.”

The Flyers will get another shot at a desperate team on Saturday, as the Buffalo Sabres make their own push for the last position in the playoffs.

NFL Owners And Players Agree To A 24-Hour Extension

Hamels Taking His Game To Another Level