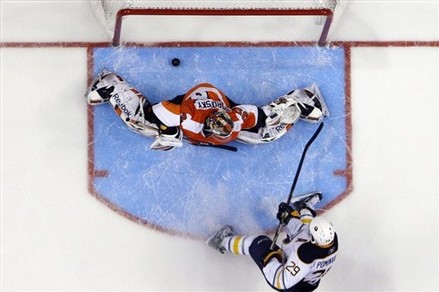 Despite a strong first period, the Flyers have lost their third in a row in today’s matinee against the Buffalo Sabres. The Sabres, fighting for a playoff position and on the outside looking in, outworked the Flyers in the middle of the second period to grab three unanswered goals and then hit the gas pedal in the third for the win.

“I’ve been in this league long enough. You’re going to get these speed bumps down the road somewhere throughout the season, and we haven’t really had those yet,” said Kimmo Timonen. “This is ours and only the guys in the locker room can fight back and get over it.”

The Flyers were throwing their weight around heavily in the first. The energy they brought off the bench was a overextended at times, as they found themselves in the penalty box with a 5-on-3 situation for 1:10. Thanks to a tremendous penalty kill from Chris Pronger, Timonen, Blair Betts, Mike Richards, and Sergei Bobrovsky, the Flyers killed it off and grabbed the momentum.

Kris Versteeg tallied his third goal in two games on the powerplay while James Van Riemsdyk worked his magic late in the period, weaving through the Sabres’ defense and backhanding the puck over goaltender Ryan Miller.

The second period was a disaster, though, as a Pronger tripping penalty gave the Sabres a chance to regain their offense. Drew Stafford, skating to the crease, scored just after the powerplay ended.

Less than two minutes later, Tyler Ennis threw the puck on net and Patrick Kaleta, thrown into Bobrovsky by defenseman Sean O’Donnell, corralled it in. It was a questionable goaltending interference play, which the Sabres’ play-by-play announcer even thought was a penalty.

Andrej Sekera made it 3-2 less than two minutes after that, and you could see the Flyers losing control. They soon found themselves down 5-on-3 again, but a herculean effort by Braydon Coburn to keep the puck deep allowed Timonen to score his 100th goal of his career, a spirit-lifting shorthanded goal.

“I’m not really a big stat guy, but I’m sure in a couple years, in two-three years when I retire, it’s going to be a nice memory… [but] I’d rather win these games then get those goals.”

In assessing the Flyers’ play, coach Peter Laviolette remarked, “When you’re up 2-0, you want to search for the third goal. If a team scores and ties it 2-2, you want to try and search to get the lead back. We lost the lead and we fought to get it back.

“Heading into the third period, we missed the coverage. The puck was in our net.”

I don’t want to suggest that “panic” had to do with the Flyers’ slide in the second half of the game, but it seemed as if they were trying so hard to generate offense that they were sacrificing their defense. Rather than keep things simple, they overextended themselves, pinched in at inopportune moments, and allowed the Sabres enough odd-man rushes that they eventually took the lead.

After the game, reporters questioned Laviolette about whether or not the team was able to keep up with the intensity of their opponents because of their position in the standings and if he was upset about losing again. I don’t know where he pulled this from, but he left reporters with a rather stirring speech.

“We’re in a position, as all teams are in the course of the year in the National Hockey League, where we have had a good season for 55 games, 57 games. Wins have come our way, the bounces, the breaks, everything’s come our way.

“We’ve hit a patch where things have not come as easily for us. There’s a belief in there that we’re going to be successful every night and we will continue down that road to want and to push to win hockey games. Some nights, it’s not going to be as easy. Some nights, you won’t get the breaks and the bounces.

“There are definitely things that we could have done better tonight and we will continue to look at it, continue to work at it. This team got to this point by a certain recipe and a certain identity on how they play the game… I promise you this. Wins will start to come our way.”

Vick vows to get work in regardless of lockout