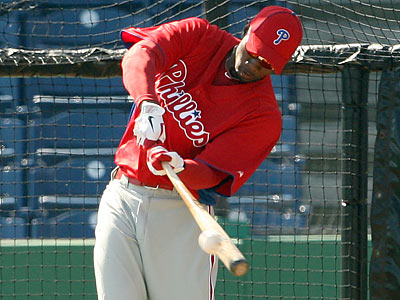 He wasn’t hitting well, now he’s incurred an injury which will sideline him from three to six weeks. Talented young Phillies outfielder Dominic Brown won’t be starting in rightfield for the Phillies in the foreseeable future.

He’s probably headed for surgery on his right hand, so it will likely sideline him for the rest of spring training and part of the early season. The timing couldn’t have been worse talented outfielder.

Phillies General Manager Ruben Amaro Jr. says he spoke to him after the injury and as you would expect he’s down.

He had come to training camp to win the starting rightfield job, but it hasn’t worked out that way. The guy he was supposed to battle for the job, Ben Francisco, has been knocking the cover off of the ball, while he, Brown has been struggling.

Francisco is batting .421 this spring and had a single, double and long sacrifice fly. On the hand, Brown got his first hit of the spring today after going 0 for 16.

Amaro refused to say that Francisco had already won the job, but he didn’t have to say anything with Brown headed to surgery and Francisco

You never wish an injury on any playler, but Brown being out for a wrist injury/surgery is probably the best thing that can happen to him..It appears to most that he was just not ready to be an everyday Big League MLB player at his skill level at this time.. Best thing for him is to get 100 % healed and go down to AAA and play everyday until he refines his swing, his confidence and shores up his defense.. D Brown needs alot of work in all the areas of his game and was a mistake by many to think he was ready ..
This is also good for the Phils & Manager Manuel for it takes the presssure off of everyone and hainving to answer questions every day “Is Domonic Brown Ready” or “What’s wrong with his swing” “Is D Brown going to be your RF” ..
From what I saw of him last year, I did not think he would be ready this soon and obviously has a lot of Raw Talent, but he needs a lot of work on his all-around game before I can see him as an everyday MLB player. Wish him the best, but it’s time for the Tweam to adjust and plan accordingly and get Gload and Delmon Young more at bats to split/spell Fracnisco who is having a great camp so far…

Wow he cant hit or field.lol. So what obviously made him a top prospect if he cant hit or field? Hes tall? Like I mentioned before its one thing to be in a slump at the plate. But there is no excuse for him looking lost in the outfield. If I am correct right field is the same on ANY level isnt it?Paulman you keep saying he need time to learn how to hit and field. You might as well put me in there and teah me to. What a joke. If the Phillies knew Brown would turn out like this I think they would of went in a different direction with Cliff Lee.

“You never wish an injury on any playler, but Brown being out for a wrist injury/surgery is probably the best thing that can happen to him.”–Paulman

What a pile of horse crap! Do you ever read what you write?

Overstated Talent and Exaggeration and Hype by the local Philly Media and Fans.. Anyone new on the scene in Philly no matter what SPort who has promise and talent and gets off to a good start is always the next Superstar..
Most Scouts and Oberservors have all stated that his judglement of fly ablls and the ability to properly read the flight of the ball of the bats needs a lot of work..You can run 4.5 40 but if don’t react to the ball, then Speed doesn’t do you as much good.. He;s only 23 and has still not played a lot of Baseball at the AAA level.. Keeping him up on the Phils Roster the last half od last season was a mistake just as it was suggesting hi would be ready to take over RF (at least versus Right-Hand Pitching in a platoon situation)
He needs at least 1 more full year at AAA (I have stated this sinec last year and still stand by it.. He’s raw and not a polished MLB player at his stage of the development.. and agin maybe he’s the Best Prospect in the Phils System, but that still doesn’t mean he’s MLB ready.. 2 different things entirely..

I agree with paulman. The 1st thing I thought when i heard was “this could be the best thing in the long run for the kid”. I’ve seen too many promising young kids ruined by being rushed to the bigs.

An injury to the hand of an athlete is NEVER the best thing that could happen to them.

Much better said Dixie, I should have streesed that this short-term injruy
will be better for him in the long run . The injury takes him out of the limelight,media pressure and hoopla and tmost likely the possibilty of even making the team, which for the long run is better for him and the Phillies.
The kid’s 23 and has time on his side to fully develop
Now Utley is another story, this is major bad news and he’s injured worse than the orginally diagnosis.. They better make some contingencies for I think Utley physical being is crumbling before our eyes and deterioating quickly..

Paulman is correct. A fracture of the hook of the hamate should heal without any longterm sequelae. The team and this young man needed an excuse to get him out of the spotlight and this is it. I said previously that they should manufacture an injury to get him down to AAA. This will be best for him in the long haul. My only question is, this kid was better than Michael Taylor, Kyle Drabek, etc and was untouchable? somebody REALLY missed on this one.

rasta, how did they miss? he’s barely been given a chance to play in the bigs yet, with little experience above AA, and 23 years old. michael taylor did NOTHING in AAA for the A’s last year and is 2 years older than dom brown. everyone knew what drabek was, he’s a #2 or #3 pitcher, very valuable. but the phillies are deep in pitching in the lower minors, and the blue jays weren’t going to trade halladay without getting some pitching back. the choice was basically dom brown or michael taylor to go along with drabek and d’arnaud. dom brown was the younger, higher ceiling guy, and michael taylor was the older, lower ceiling, but closer to the bigs guy. the way the phillies evaluate minor league and amateur players is based largely on tools, and dom brown had and has the better tools. everyone on this site who is already proclaiming dom brown a bust is completely and utterly clueless.

I don’think D Brown is a bust at all, but he’s clearly not ready and needs a full season 400-500 At Bats and paly everyday at AAA and maybe can come up to the big Squad in September and get a little more MLB experience under his belt and be ready to compete for 2012 Season (When Ibanez is gone) but anyone who expected him to ready for this 2011 and be a major contributor doesn’t know Baseball and Polished skills that ar required that it takes to play in the Major Leagues.. more wishful thinking by the CLub, the local Philly media and many of the Phils fans

i will not tell you brown is a bust . but i will tell you taylor is a better hitter and he is a right hand at bat . and i seen that in person.

To agree with the moronic statement that Brown’s injury is the best thing that could happen to him is not only cruel but it takes a special kind of heartless moron to say it. He is a human being who is hurt in many ways by this injury. He needs surgery. You can not predict the outcome of the surgery. It will affect his swing afterwards. “Best thing that could happen?” Maybe we should be wishing it on you who would think that.

nev856, Taylor hit .272 with 6 HRs and a .740 OPS in AAA last year. and he’s 25 years old. Dom Brown is already the better hitter (.980 OPS last year between AA and AAA), with much more projection. there isn’t much projection in a 25 year old. in case you didn’t know, age matters ALOT when evaluating a prospect.

so many haters on this website, and how is brown a bust? he barely played in the majors and crushed in the minors…give him time hes only 23, and im pretty sure utley and howard didnt come up until later so why the rush?

Rastadoc, too many spliffs and not enough brainpower