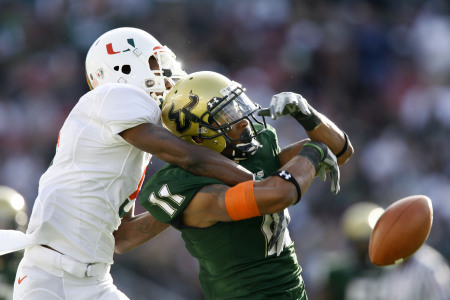 The NFL draft is a little under two months away, but with the combine in the rearview mirror, its time for teams to start having individual workouts with players.

The Eagles have begun that process, and the first player they have decided to take a look at is Miami cornerback DeMarcus Van Dyke. The team will work him out in Miami on the 14th of this month. Van Dyke recorded 6 tackles, 2 interceptions and a forced fumble last season.

Van Dyke caught the eyes of scouts, and it looks like the Eagles, when he ran the fastest 40 at the combine. His 40 time clocked in at 4.28. By comparison, Chris Johnson of the Titans has the fastest 40 time ever recorded at 4.24.

Another thing Van Dyke has going for him is his size. He measured in at nearly 6’1, which would instantly make him the tallest cornerback on the Eagles roster. His combination of size and speed is definitely intriguing for an Eagles team that has to face receivers like Hakeem Nicks and Dez Bryant twice a year.

Van Dyke better hope that a team takes a flyer on him due to his athleticism, because scouting reports are not kind to the Miami

product. ESPN has him ranked as the 30th best cornerback in the draft, and puts him as a late round pick at best. They cite his lack of natural instincts as a major problem going to the next level.

Van Dyke disagreed with this assessment, saying that he is “good at reading the quarterbacks eyes and breaking on the ball.”

Another issue for the Van Dyke is his tendency to give his receiver too much of a cushion at the line- which should make him fit right in with this current group of Eagles defensive backs.

Scouts also were not impressed with his ability to stop the run, siting his inability to shed tackles and lack of physical play.

The Eagles have 2 picks in the 6th round and one in the 7th, so they could use a late round pick on Van Dyke. The Cleveland Browns have also shown interest, and will work him out on the 17th of this month.

While by all accounts Van Dyke is no where near a polished prospect, it would be refreshing to see the Eagles put a tall, athletic play maker in the secondary.

VanDyke has crazy speed running in a straight line.. He potentially could be a return man and a 4t CB.. His Coverage and Tackling skills are not very good at this stage of his career,but he has a frame to put on 10-15 lbs and with hard work with good coaching could develop into a player down the road..

we need a big physical corner who can tackle as well…. WR’s are getting bigger, taller, and stronger…… te’s are being motioned to play wideout at times for an offensive advantage standpoint……. Guys like Vernon Davis with speed of a wr and the strength of a mule can have a big impact/advantage against an average size 5’10 185 lbs. corner in this league…… I think Chris Rucker form mich. state will be a great pick for the birds to make a early impact……

Van Dyke reminds me of jaguars corner Rashean Mathis….. He could be someone that the eagles wouldn’t be interested in because the birds love the more shorter corners with the likes of Joselio Hanson and Lito Sheppard type guys who are small but scrappy….. I hope the eagles can change some of there historic ways with picking up more power instead of speed in this years draft…..

We need a power back…. Someone who can bruise a defense…… We need a scheme that can make vick feel more comfortable within the system….. You know the DVD days…….. Sorta like the Earth wind and fire days when the giants had a ton of success with the run game that helped Eli Manning in his young career and perhaps winning a superbowl……

Everyone is looking for the next Sam Shields.. Van Dyke is a terrible tackler and not physical at al. He is a 7th round pick at best as a project..

I see a lot of overreaction her. How many times have we heard that they’re working out a guy and they don’t draft him? And he’s pretty tall for a corner, so why the size argument?

Jott, are you seriously focused and getting a power back and changing the scheme? We all know that that is incredibly unlikely, you have a better shot trying to fly.

@schiller –
you got the names wrong… jroc wants a power back..

Names the Eagles can get in the middle rounds who will be steals in the secondary:
Utah State CB Curtis Marsh, played RB early in college and switched to defense to help….learning but big upside.
Clemson DB Marcus Gilchrist, played FS, SS and CB in college… quick and isnt afraid to hit someone
Applachian State S Mark LeGree, big hitter who can play FS and SS… good size and speed

Good calls Jott1972
I live in Boone,NC and have watched S M LeGree play the last 3 Years for ASU.
I do believe as you,that he can play at the NFL level.. He has the frame to put on another good 10lbs once in NFL Teams Strength and Conditioning Program and could be a steal in the 5th/6th Round for someone.. He’s fast and has great hands (I think he is the Career all-time leader ar ASU for Int’s and is heavy hitter and sure tackler) He could be a demon on Special Teams Coverage units and with good Coaching could be a Starter within 2 years..

To Schiller, the size element is that Van Dyke is about 170 lbs soaking wet,,

Sounds as though this guy can’t play and would be a project, so it’s a guarantee the Eagles will draft him. Why use a first round pick when you can trade it for 5 6th rounders. They will probable project him as an outside linebacker. Andy is hell bent on winning the Kentucky Derby with Old Nags or quarter horses.

rastadoc – sure, why use a first round pick on this guy – I hear that for sure. But who said they’re even considering using a first round pick for him? I don’t think anyone’s claiming that. They’re giving him a workout, doesn’t mean they’ll draft him, and certainly doesn’t give an indication what round if they do…

i read this story this morning , and i don,t understand the whole point , the eagles do not bring in late round picks for workouts . i am sorry i am not buying this story. i firmly beleive andy is on his last legs this is just a ploy for something else.as singletary says ” i want winners”.

Believe it or not, many teams have workouts on players they feel will fall thru
the cracks and not even get drafted by anyone,therefore become available to sign after the Draft..I am not saying this is the case here, but some teams will utilize some of their workout meetings to get a closer look at players who don’t have much film, weren’t a starter or maybe coming off an injury..

The Eagles do bring in late round players for interviews every year. Last year around this time the were interviewing guys like Ted Larsen – Charles Scott – Mike Newton. I wouldn’t read much into this interview.