Phillies Offense Needs To Bounce Back This Year 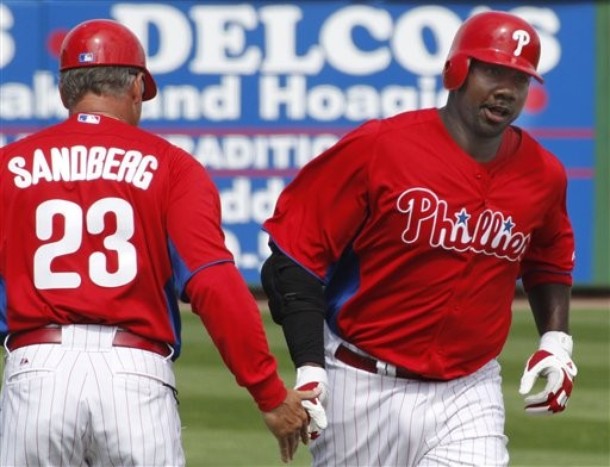 Jimmy Rollins is known for making bold statements during spring training, but a few days ago, he may have made the boldest one yet.

He called the Phillies offense the “B Squad”.

It took some dealing by Ruben Amaro Jr., injuries, and age to make it happen, but there is no question now that the Phillies are a pitching team. The offense is now second fiddle to the starting rotation full of aces.

If the pitching rotation lives up to expectations, it will be on the bats to bring home the World Series trophy. But over the last few seasons, the offense has started to decline.

The Phillies offense has dropped in run production the last 3 seasons, from 892 runs three seasons ago to only 772 last year. Not only did the teams total runs scored go down, but they also did not have as many “big games” fans here have gotten used to. In 51 games, which is just under a third of the games the Phillies played, the offense managed only 2 runs or less. 75 times, the Phillies offense scored only 3 runs, which is over half of the season.

Recently, Jayson Stark of ESPN wrote an article highlighting the Phillies offensive struggles and the reason behinds it.

Starks writes that the opposing teams have begun to figure out the Phillies, and are starting to pitch them different. It is no secret that the Phillies are a home run hitting team, and struggle to score when they have to do it by moving runners. This has resulted in a lack of fastballs the team has been seeing. Chase Utley, Shane Victorino, Jimmy Rollins and Ryan Howard have all seen the amount of fastballs they see drop dramatically over the last 3 seasons.

The problem is in the Phillies inability to adjust. Multiple scouts that Starks talked to said that the Phillies “get themselves out” and “hack at breaking balls.” Another scout says that Ryan Howard is clearly pressing since he signed his big contract, and refuses to take more walks. Bad at bats like the ones mentioned by the scouts are the main reason Milt Thompson lost his job as Phillies batting

uns. This shows that when the Phillies needed their offense most while they were chasing the Braves, it came through.

Of course, that changed in the post season. After averaging 4.7 runs per game in the regular season, that number dropped to 2.8 in their loss to the Giants in the NLCS. Remember, the Phillies had the best pitching rotation in the post season last year, as well. It was the offense that cost them the series.

The offense’s mission to prove it can still be the “A squad” is off to a rough start this spring. The situation revolving Chase Utley’s knee seems to get worse by the day. While Ben Francisco has played great during the spring, he still has yet to do it for a whole season. Any dreams the Phillies had of platooning Francisco with Dominic Brown took a hit when Brown struggled then broke a bone in his hand. The only Phillies batting over .280 who figure to be an every day player are Ryan Howard, Carlos Ruiz and Francisco.

The cloud around the Phillies offense is not as dark as Stark paints it, but it’s also not as clear as the organization would like it, but there’s no question that despite not being as bad as people think last year, the offense will need to bounce back if it hopes to have another parade down Broad Street.

It was a good article by Stark and a good recap Eliot,
I’ve stated for 2 years that the Phils Offense really struggles with the off-speed stuff and that they lack the fundamentals to play enough “small ball” to win a lot of low-scoring games and rely too much on the big hit, the 3 Run Homer..
With the Pitching staff the Phils have, 4-5 Runs should win a lot of games, but Rollins,Vicotrino need to become more “contact” hitters,maybe they choke up a tad and swing down on the ball to keep it in play and utilize their speed more.. If they don’t and end up Popping out/Striking out like the big hitters do, then this team is wasting it’s great Pitching and will make it much more difficult to win come playoff time relying on that ‘Swing for the fences mentality” ..

Who cares what you have stated. You just smother this website. Too much ego, too much nonsense. Back off, a little, until you get more clever.

that was actually one of paulie’s more balanced, less negative assessments of the phillies, but I share your frustration in reading most of his rants/predictions, almost exclusively negative about the home teams, and usually wrong.

Someone has to balance out all this Phillie Kool-Aid you guys have been drinking.. This team’s Offense and Defense is not as good as in years past..
I question Manager Manuel’s ability to coach “small ball” well enough to beat the good mangers and other good teams like the Giants/Reds/Padres once it comes to crunch time.. The Phils no doubt have a great Rotation.. I want to see the situational hitting, moving runners with less than 2 out, good defense and good base running and a Solid Bullpen as well before I annoint this 2011 Phillie Team as the best team ever like many have stated

Blah Blah Blah……. Philllies offense sucks, it doesn’t matter who they have pitching. They won’t win the NL East, let alone the WS.

How did that work our for San Fran by the way?

Giants had 4 things over the Phils last season

#1) Better All Around PItching and Bullpen
#2) Better all around Defense
#3) Better Situational HItting, (more contact,balls in play, small ball)
#4) Better Managing by Bochey over Manuel by a mile, Giants utilized entire Roster while Phils had the same group every night who failed to get it done

If you think Rollins, Utley, Howard, Ibanez and Victorino are all better or even the same players, that they were in 2008, then keep believing it..
The window is closing fast on this Team..

And this year, there are 3-4 teams that all that will have these same things listed above over the Phitin’ and Overrated Phils
#1) Reds
#2) Giants
#3) Padres
#4) Braves

You are just a blogger and not a fan. All fans see the weaknesses of their team, but even the most objective source sees this team as the favorite to win the world series. You constantly harp on their perceived limitations; you must watch the games hoping you are correct to vindicate yourself here and elsewhere you predict gloom. That is a sad existence.

And when do the proverbial sources/odds-on favorites ever win anything..
This Team has a lot of weaknesses and I call them as I see them and will point them out..