Utley Is A Serious Concern, But It’s Too Early To Make A Trade 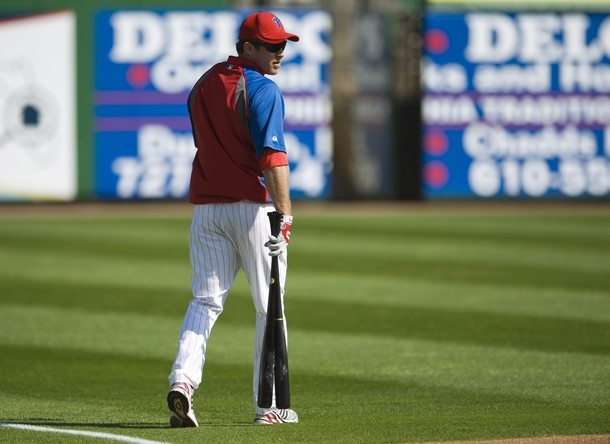 Whenever a star player goes down, the natural reaction of the fans is to call for the team to make a move to acquire the best available name on the market. With the concerns of Utley’s status growing by the minute, the calls for the Phillies to make a move grow as well. But here’s the reality: it’s far too early for the Phillies to be seriously considering a dramatic trade, such as pursuing Michael Young from the Texas Rangers.

Several things need to play out before such a deal can happen. First, the Phillies need to determine with the utmost certainty whether or not Utley can contribute at some point this season. Even if Utley needs surgery, and will need to miss a significant part of the season, the Phillies are still head and shoulders above every team in the National League East. They know their starting pitching is going to be at an elite level. They aren’t sure about whether or not the rest of the batting order is going to fare well, but they don’t know that the lineup will struggle as heavily as they did last year either.

If the Phillies get to the trade deadline, and Utley still hasn’t made any significant progress, and the offense is struggling like they did a season ago, then it may be time to think about a Michael Young (Young would only be owed around $8,000,000 after the deadline, making it more feasible to fit him into the payroll).

Also consider the long term ramifications of a trade for Michael Young. Young is owed $48,000,000 over the next three seasons. The Phillies have already exceeded their budget, so how are they going to be able to fit another $16,000,000 on the payroll this season? The easy answer is to throw Joe Blanton into the trade. But who said the Rangers want Joe Blanton? They’re looking to move Young to shed salary, it isn’t likely that they’d be eager to accept a contract for $17,000,000 for an average pitcher who will likely have an ERA in the mid to high 4.00s.

Young is also 34 years old. Young may be capable of putting another strong season together, but it’s hard to rely on players in their mid to late 30s to play key roles in the lineup. The Phillies have learned that after they gave a big contract to Raul Ibanez. While he

gave them unbelievable production in the first half of his first season, it didn’t take long for his production to fall off, and now the Phillies find themselves stuck with a big contract and a player that they have no idea what to expect from production wise. Does it sound like a good idea to possibly have $32,000,000 in dead money on the payroll in 2012 and 2013? The Phillies are going to need that money to keep players like Cole Hamels here long term.

Trading for Young would also require the Phillies to part with more prospects. The Phillies farm system has been depleted to bring Roy Halladay, Cliff Lee, and Roy Oswalt to Philadelphia. There aren’t many prospects left that the Phillies can afford to trade. The Phillies core group is aging, and they need to consider their future as well their present.

One more thing to consider: the Phillies may have more pressing needs later in the season. Is everyone completely confident that Brad Lidge will have a steady season as the closer? Lidge has been struggling with his velocity so far in Spring Training, creating some concerns about the closer. If Lidge can’t close effectively, does everyone have confidence in Ryan Madson as the closer after seeing how he’s performed in the role over the last two seasons? If the Phillies use whatever trade flexibility they have left on Young now, it could cost them later in the season.

Utley’s situation should by no means be taken lightly. However, it just isn’t the right time for the Phillies to seriously consider a dramatic move to fill the hole. The Phillies will keep an eye on Young throughout the season, and if it becomes clear later in the season that a dramatic move is necessary to win a championship this season, Ruben Amaro has given Phillies fans every reason to believe that he will act.

Who Should The Phillies Bat Third If Utley Can’t Go?