The Philadelphia Soul Turns Off The Power For First Win 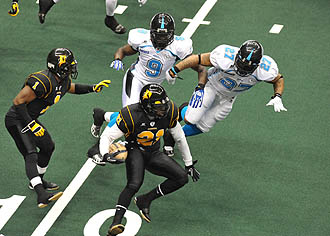 Mike Brown’s return to the Philadelphia Soul began in dramatic fashion. Brown returned an interception 15 yards for a touchdown in overtime to give the Soul a season-opening 58-52 win over the Pittsburgh Power in overtime.

The Power (majority owner Lynn Swann) played in their inaugural game and gave the 13,000 fans at the Consol Energy Center in Pittsburgh everything but a victory. For Soul majority owner Ron Jaworski and head coach Mike Hohensee, it was their first victory for a Soul Franchise is returning to the AFL after a three-year absence.

The Soul led 50-41 with less than two minutes remaining before the Power outscored the Soul 9-2 to force the game into overtime.

The Soul, who open up the first month of the season on the road face the Chicago Rush next Friday at 8pm on the NFL Network.

Sixers Show Their Grit, By Outworking The Conference-Leading Celtics

My Letter From Commissioner Roger Goodell