We Could Be Headed For Some Long Ninth Innings With Lidge 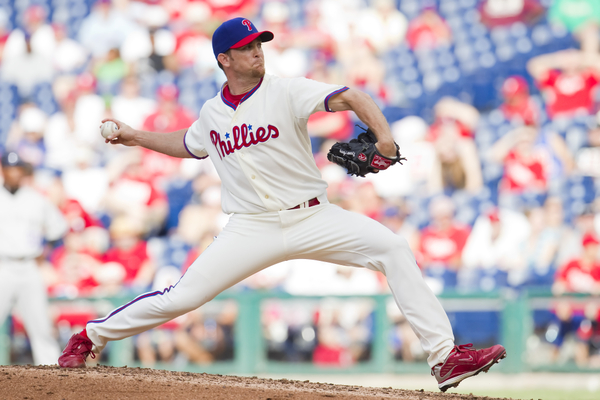 My theory is that every Major League Baseball season is a like a movie. The heroes will have some trouble but get through it to win in the end.

I went to the movies on Saturday to see Unknown, which stars Liam Neeson and is a movie about this guy who goes to Germany with his wife for a medical convention but strange things start happening. He gets in a car accident which sends him into a comma. When he comes out his wife is with this other guy, who has taken his name and identity. His wife acts like she doesn’t even know him.

Of course in the end, he winds up figuring things out then straightening things out in the end. I wasn’t shocked when bad things started happening to the hero. You go into the movie expecting the hero to have some trouble but eventually get through it in the end.

If the hero didn’t have any trouble the movie would be boring. The same is true of the baseball season.

For instance the Phillies, I know everybody has been making a lot of noise while wringing their hands about the tendinitis that has sidelined Phillies second baseman, Chase Utley, but the arm problems of closer Brad Lidge are just as much reason for concern. They say it’s just soreness. I say it’s sore for a reason.

Lidge used to throw a 90 plus mile-an-hour fastball but now he can’t even get it up to the high 80’s. He used to get ahead of hitters

by throwing for strikes with that good fastball in order to get ahead of batters, then he would strike them out with that “killer” slider. They would chase it in the dirt.

Low and behold, we find out today that he’s got bicep tendinitis. He, Charlie Manuel and Rich Dubee all say it’s not big deal, but they said the same thing about Chase Utley. How’s he doing nowadays?

Now with a mediocre fastball, hitters will start jumping on Lidge when he tries to get ahead of them. They know there’s no smoke on the fastball. We could be in for a painfully long, ninth innings. You remember a couple of years ago when he was giving the entire Delaware Valley stomach problems from watching him blow saves.

People were getting sick from watching him save games. Can you trust him with a one-run lead? How much of a chance does he

have a getting a save once he has a base runner or two?

I know we have the best starting rotation in baseball, bu you Charlie is going to be handing the ball to Lidge in the 9th most of the time. We can’t afford him to be letting wins slip away.

Somebody tell Brad that we would all like to see a one, two, three every now and then. There have been times during Lidge’s stint here that I thought they paying him for ratings. The longer he could keep the crowd there and interested the more they would pay him.

Remember Phillies fans that a baseball season is like a movie, the hero is going to get in the trouble, but he’ll be fine in the end. Remember that when we start the season without Utley and Lidge, plus they have to undergo surgery, and don’t really get ready to play until the second half of the season.

ESPN’s Tim Legler Says The Sixers Defense Is The Difference

Another old body that is breaking down… The Phils are loaded with them all over their Roster (Utley,Rollins,Ibanez,Polanco,Contreras,Lee,Oswalt,Lidge)
I may have to downgrade to Phils to the 4th/5th Best team in the NL behind
the Reds,Braves,Giants,Padres..

Paulman? The Reds? Padres? 4th to 5th best team in the NL???????????? I dont know why Lidges annual soreness has you guys freaking out. How is contreras breaking down? Lee? Oswalt? What facts do you have? Lee and Oswalt had fantastic years last year. Contreras was awsome too. You cant take spring training seriously. You dont know what they are doing to get ready for the season. The batters are trying to hit a breaking ball to the second baseman, then next at bat grinding for a walk, then next at bat hitting a fastball into the ground, pitchers are throwing 90% fastballs. They use these games to prepare, they do not take every at bat/pitch serious.

I am not freaking out Stopgoat..
I just don’t think the Phils are that good (outside of their Starting PItching which is excellent) but their batting Line-up has too many streak and high strike out hitters, their Overal team Defense is average to below average, their Bullpen is average and their Bench is below average

The Phils have some holes, buts let not act as though these other teams are the 27 Yankees Paulman.

60% of a pitching staff is the bullpen. Last 3 innings of a game are everything. Phillies gonna come up short there….

One of the hardest thing is baseball is building and maintaining a solid bullpen.

Excellent point Can’t climb
The Reds,Braves,Giants,Padres all have superior Bullpens than the Phillies
These 4 teams have overall better team defense and deeper benchs…Again,
the Phils are Overrated because of the Big 4 Pitching..
I actually look for Cliff Lee and R Oswalt to be slighty above average and not be dominant at all for most of this season..We’l see what happens..

The phillies are a top 5 team defense. Their bench always does fine, I dont think you could name one person off of san diegos bench without looking it up. They have been rated as the favorite since 08, it doesnt have everything to do with the big 4, thats a new thing. THey have the best staff in baseball. That means everything. They have a premier slugger, two great basestealers, will fill in right handed bat somehow. Dont know why lidge and madson and contreras are suddenly playing second fiddle to the braves, who is their closer? The Giants are a meltdown waiting to happen. Im not saying the phils cant loose but to sit here and say they are the 4 or 5 best team in the NL when VEGAS has them as the FAVORITE TO WIN THE WORLD SERIES is just ridiculous.

Top 5 Team Defense was about 2-3 years ago for the Phil’d, Stopgoat..
They are weak at 1B,LF & RF now and with Utley’s health, it’s a question ??
(though Utley is not the fielder he was anyways, Valdez is an upgrade)

Braves –
Closer Kimbrel (young gun who throws about 100 mph and has bulldog mentalilty- was their closer their last 5-6 weeks of last Season when B Wagner was injured)
Set-Up Pitchers in S Linebrink, G Sherril, P Moylan (who all have closing experience) and tough situaltional Pitchers in E O’ Flaherrty & S Proctor

Giants –
Closer B Wilson (the best in the game right now) and Set-Up Pitchers like
Affeldt,Romo,Casilla and Ramirez

Padres
Closer in H Bell (2nd best closer being B Wilson)
Set up Pitchers in Gregerson, Thatcher & Adams and LeBlanc

Polanco just Reinjured his Elbow that he had off-season Surgery..
This 2011 Phillie Team is old and breaking down before the Season even starts.. That Utley,Lidge, Brown and now Polanco injured ..
You Phils fans still think this Squad walks away with teh NL EAst and wins 110 games.. You are dreaming.. This is just the beginning of what could very well be the most disappointing Season by a Favored Philly Team of all time…

oops, sorry for the typo. I meant to add another couple ‘o’s… my b, my b

I guess I could say, I told you so, but I am not kind of guy and don’t wish any injuries to any players and especially my favorite team the Phitin Phils..
I do stand by many earlier comments and posts about the age and physical make-up of this club to go the distance,.. I don’t think they have a shot .. There are a lot of Older players on this roster who have played lots of games over the years and some of them are having their bodies just breaking down
on a regular basis and I expect Polanco, Utley, Victorino, Ibanez, Lidge, Oswalt and even C Lee to miss time over this season and some of these players may miss significant time..So before everyone hands out 1st Place and a NL Pennant, I will repeat that about 3-4 teams improved quite a bit this off-season like the Braves,Cubs,Dodgers,Breweres to go along with the reigning WS Champions SF Giants and the more mature Reds & Padres.
This is the best and deepest NL from Top to Bottom in many years in my opinion even the Pirates,Astros,Nationals will win their share of games..
I predict the Red over the Braves for the NL Pennat in 2011 in a series for the ages while the Phils are home saying the old woulda,coulda, shoulda..excuses…

What happens when cole hammels is matched up with homer bailey and the likes of other 4th starters? You have no credibility because you said the PIRATES will be part of a deep NL. Go over the Pirates lineup. Thats the worst team in the history of baseball and its discusting the team they put on the field. Lehigh Valley would destroy them in a 7 game series. The Phillies dealt with many injuries last year, and wound up as the BEST TEAM IN THE MAJORS. there is no disputing that. The Phillies then upgraded themselves in the offseason. WHile I will say the braves are a much better team, they are still veery young. Starting pitching is a proven winner in MLB and the Phillies will end up with 94+ wins and another NL east title. (ALSO YOU SAID THE PHILLIES DO NOT HAVE A SHOT, AND THATS JUST A TOTALLY IGNORANT COMMENT CONSIDERING EVERYTHING i MENTIONED)

The SF Giants were the best team in baseball last year since they won the
World Series.. who cares about having the most regular season wins if you
don’t win the Championship.
Also the NL East Division is a joke this year (outside of Atlanta) and is probably the weakest in the entire MLB and for the record I stated that the Pirates,Astros,Nationals are improved teams and not going to be gimme’s
Too many Philie fans are living in the past and thinking about how
many of players played 2-3 years ago.. This is an old, often injured with many regular everyday players on their downsides of their playing careers..(Ibanez,Polanco,Victorino,Rollins,Utley) They will not even win the NL Pennant let alone the WS this season.. They have a shot for their Starting PItching staff,
but they will fall apart with many injuries, and issues with Bullpen and Defense..
I would still rather have SF Giants Starting Staff any day over the Phils 4

Thats assanine bro. This conversation is over. You are no fan. Go root for the 88 win giants. Sometimes u catch lightning in a bottle, doesnt mean your the best baseball team, you get the hardware. Thats the beauty of a 162 game season, you find out who the best baseball team is. Then its anyones game after that. Im not thinking of 2 yrs ago, they won 97 games last year. I dont know what you consider often injured. Why would a real fan think that his team (best on paper in teams 100+yr history) would have no shot this time of year. Even the pirates have a chance in March. Go pound sand.