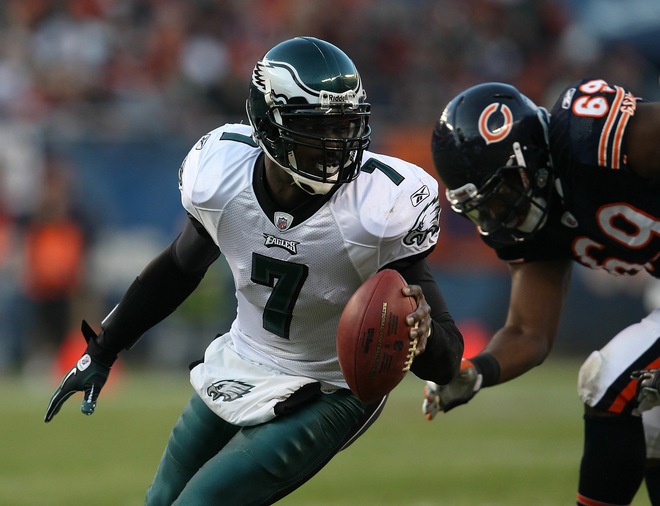 Philadelphia Eagles quarterback Michael Vick inked his second endorsement deal since rejoining the NFL after a near two-year stint behind bars. He signed a contract with Core Synergy which produces a titanium-infused silicone wristband.

Vick will be endorsing the product along with the Steelers, Maurkice Pouncey and A.J. Hawk of the Super Bowl champion Packers. The three players will serve as representatives for the Lutte Licensing Group, which makes and distributes the Core Synergy bands.

This is a very important time for Vick and the Eagles. It’s extremely important that he stays on a program of football every day. He should be working out and watching tape. He’s not a spring chicken so he could lose that difference-making speed, if he doesn’t maintain it with works out.

Vick needs to be watching tape every day. We all know he needs to become more familiar with blitz-looks, so that he can make changes at the line of scrimmage. He’s got to stay focused on football.

I hope he and the Eagles have a program for him in place. Vick should stay hungry for finding ways to take his game to the next

level. I don’t like the fact that he’s not sitting in a film room every day with Andy Reid, Marty Mornhinweg or Doug Pederson looking at blitzes that were used against them in the second half of the season.

The former number one pick in the draft should be working out with teammates and looking at defenses.

Vick has to prove he can torch teams if they blitz him or that’s all he’s going to see. It’s just like a hitter who struggles against the curve ball. What does everybody throw him?

Vick co-defendant due in court

Vicks going to see the blitz regardless. Teams still blitz peyton, aaron rodgers yet they diagnose what’s happening they take a picture then torch the defense. Maybe vick won’t see the blitz as much if he learns how to beat it.

And noone can convince me that vick isn’t working with someone off of the offensive coaching staff to help him with his blitz reads. Someone somewhere is helping him

Michael Vick has said that he is studying tapes of defenses and has also watched tapes of how Aaron Rodgers handles blitzes, he is doing what he said he would do, but he is a human being not a machine. Michael Vick has a life and a family and his first obligation is to God and then to his family and the Eagles next. I think for the first time in his life he has his priorities straight. I think it is time for all the doubters or maybe just because it is easy to write a article about Vick than to research what he really is doing. I don’t see anyone having a problem with Manning and his commericials or any other atheletes. Michael Vick is doing what he said he would do so I don’t even see the reason for this article. You may think he needs to set in front of tapes 24/7 but i don’t. Michael Vick picked up a offense quicker than Kolb did and he was on the bench watching for years. If you could not see that I suggest you go back and watch the games again and you will see he knew where every player was suppose to be in a set. He will learn more this off season about defensive schemes. He has Dungy working with him, Beamer working with him and other ex-coaches that are not in the league right now so I am very confident too bad you are not.

Eagles Bird Gang thank you for your comments. This is just another article with Vick’s name on it

Does anyone think that fans and local media get concerned in Boston when
Tom Brady gets a new endorsement deal or in Indianapolis when Peyton Manning does..
Should the Club, Fans and the local Media be concerned that M Vick can’t handle the success.. Is this a form of Racism or just not believing that Vick has the fortitude,maturtity and professionalism to handle success as other players have done and that Vick still has the burning desire to improve, to continue to work hard and compete at the highest level for a Super Bowl
or does any of this even matter what Vick does this off-season…

Paulman, here is an example of your stupidity, plain and simple. It’s not racism at all because the implication of the headline refers to Vick’s past, not his race. Peyton Manning and Tom Brady haven’t gone to federal prison for breaking laws and lying to police. That’s the difference. That you can’t see beyond that is appalling. Get a clue.

While it’s not racism, Pauli still has a point. You’d never read an article like this any where else. This article is horrible.

Actually, johnathan, there were several similar articles following the Kobe Bryant rape case when his sponsorships started up again, same with Tiger Woods, I know there’s others. What say you to that? There is absolutely nothing unique about the story. It’s not novel. The media follows a script – when a prominent athlete goes to jail or is busted for a major scandal, then returns to the sport and sponsors crop up after pulling out from the news, the media searches it out and prints it. This is nothing special in Vick’s case.

You can certainly make the argument that it’s boring news or not that significant. Or that the media is singling out the athlete at the time, all fair, but this isn’t anything new. Nothing specific to Vick.

Schiller is exactly right, people like to point to the racism card with vick every chance they get but its not the least bit true. I am one of the biggest vick supporters i know, but think of this in a real life context. Lets say you work a job and you commit a felony outside of work and are sentenced to 2 years in a federal prison. Once you get out dont you think every job interview you go to people are gonna question every thing that comes out of your mouth? Now imagine you are the face of a multibillion dollar corporation and do the exact same thing. People are going to question Vick’s intentions for the rest of his career until he retires. It’s just the way people are. I believe he has changed for the better and is going to do everything in his power to win the eagles a SB. However for people to question if his head is on straight is completely understandable and expected.

Schiller,
I brought it up as a topic of discussion… Why does everyone become so defensive when you bring up Racism… I never hear about other athletes ability to stay focused about their sport and profession whether it’s Peyton Manning,Reggie Bush,Ray Lewis, Darrelle Revis, Tom Brady,etc,etc..
It just seems like whenever anyone mentions anything about Vick or what he’s doing, it’s a lightning rod… a double standard, and I do believe some underlining racial tones to it….

Paulman, you like to set yourself up as the great liberator, the great white liberal and hero. Vick was in jail for almost two years, and ran into that party problem after he got out. Garry says he hopes Vick stays focused. Then you come in on your white horse, correcting Garry? You just love the attention and hope that someday you will be accepted by the big boys, with the hope that they will let you play with them.

Paulman reminds me off those people who blew this out of proportion. Mental midgets.

The wind certainly shifted in Philadelphia as to how they perceive #5 since that incident, hasn’t it?