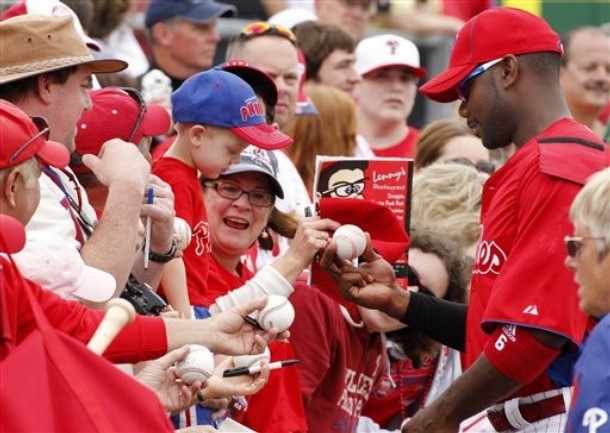 Spring training baseball at Bright House Networks field should be on every Phillies fans bucket list. The crowd is small and intimate, the players are relaxed and laid back, the weather is great and every person in the stadium is happy.

The cliché way fans start each Phillies spring training home game is to grab breakfast at Lenny’s. Lenny’s is just around the corner from the stadium. Lenny’s does live up to the hype and is family oriented, however, it also requires waiting a good while to be seated.

The Tilted Kilt is a worthy pre-game meal alternate. It is located a block down from Lenny’s and faces the stadium’s south gate. The Kilt opens at 10:30 AM; it serves alcohol and bar food rather than breakfast food. Phillies fans in Clearwater with a group of their friends should go to the Kilt before the game. Phillies fans with their family, should go to Lenny’s, but be prepared to wait.

AM. Sections 120 and 119 are located on the third base line and are the designated area for kids to wait for an autograph from their favorite Phillie. Phillies fans also have a chance at an autograph outside the stadium in the parking lot behind the left field tiki bar.

The left field parking lot is where the players enter Bright House Networks Field from the Carpenter Complex. The best part about getting to the stadium early to see the players walk into the stadium is watching grown men scream for Cliff Lee, the way a 12 year old girl screams for Justin Bieber.

The Phillies charge an extra dollar to sit in the outfield grassy area known as the “berm” but there are no ushers stationed at the berm checking tickets. Fans with standing room tickets that grow tired of walking around can sit down and enjoy the game from there. The right field section of the berm is the best place for Phillies fans with families to sit because it is the furthest from the fans that are enjoying their favorite alcoholic beverages at the tiki bar.

Phillies fans in their 20’s will be disappointed to find out that tailgating before the game is frowned upon by parking lot ushers, so leave the baggo set in Philadelphia. The best pre game beer option is the Tilted Kilt. Cash strapped Phillies fans should not depend on Frenchy’s Tiki Bar for their alcohol needs. The tiki bar charges six bucks per beer and thirty bucks per bucket,( five beers come in each bucket). In theory, if a group of Phillies fans drank a case of beer at the tiki bar they would spend $120 on each case guzzled.

A beer distributor sells Kegs at that price.

The best advice for a Phillies fan going to his or her first spring training game is to enjoy everything the stadium has to offer. Fans should check out each part of the stadium from the berm to the bullpen. Fans shouldn’t allow themselves to sit in their seats for all nine innings, after all the game doesn’t count.