Lidge Will Start Season On DL, So Who Should Be The Closer 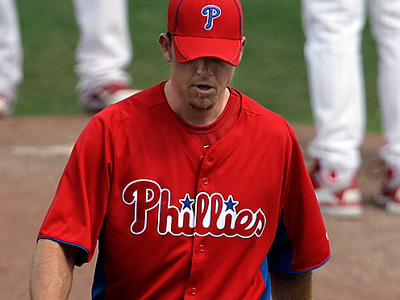 It wasn’t totally unexpected when the Phillies let be known yesterday that closer Brad Lidge would be on the Disabled List when the Phillies begin their season against the Houston Astros next Friday. That will mean both Lidge and All-Star second baseman Chase Utley will be out of action when the season begins.

There’s reason to be seriously concerned about Lidge. He’s shutting things down right now because of pain in his shoulder not the tendinitis in his bicep. All we had heard about before was the tendinitis then all of sudden he’s having problems with his shoulder.

“I’m a little concerned because I haven’t had shoulder problems in the past,” Lidge admitted. “That being said, there’s other things in there you can have that can be a byproduct of just straining it and they’re not serious. That’s obviously what I’m counting on right now, to be honest.”

Lidge also let us know that the pain in his shoulder had been there for awhile.

“I don’t know if that’s a bad sign. I know I wish there was no pain,” Lidge said. “There was always a little bit of pain in the back that

we thought was from the biceps tendinitis. But there is that. I’m not really familiar with that. I’ve never had shoulder issues before, at least not for a long time. So I’m not familiar with the discomfort and pain I’ve been having.

Okay Phillies fans, who should be the closer while Lidge is out. Should it be Ryan Madson or Jose Contreras? Madson has been a quality set up guy for Lidge, but he’s struggled as the closer. Who knows how Contreras would do as a closer?

Tells us what you think. Madson or Contreras?

Can The Sixers Catch The Hawks And The 5th Spot?

Jason Peters Was Arrested Last Night For Disturbing The Peace

I say Contreras. Leave Madson in the eigth, and let him try the ninth. I think he is ready to step into a bigger role with this team. They showed a lot of confidence in his ability to get through even two innings at a time by dropping Durbin. Geez I am ready for the season.

I would also leave Madson for the 8th/Set-up Role which he has proven to be outstanding, but for some reason, when he gets to the 9th, he hasn’t performed as well.. I know this may sound a little crazy, but If Lidge is going to be out for a long while, which is possible, I would love to see Roy Oswalt
converted as the “Closer”… He has great command (which is very important) and still has great stuff, mostly with his Fastball/Slider and occasional Curve ball. He’s been around long enough to have the nerves and the mental toughness that it takes to be an effective “Closer” I think Oswlast could extend his career a couple of more years by moving to a Closer similar to what John Smoltz did for the Braves..
The Phils would still have a very good Starting Staff with Halladay,Lee,Hamels,Blanton and have a Kendrick or Worley as a 5th Starter

many times we have seen madson pitch a lights out 8th to have lidge or someone else blow it in the 9th. if he is doing well in the 8th and batting order allows it let him in there. for a good amount of years lidge has been an every other year guy , this year is going to be a stinker. they need to find somebody and i do not feel contreras will fill the need for any period of time.

Nev last year was a stinker. I am not going to worry about lidge unless he has a serious problem with his shoulder. He will come back with a great slider and fastball. Taking oswalt out of a starting role when u have other options is a little rash. Oswalt is too good of a starter to move to the pen. Smoltz wasnt an effective starter when he made that move. Still a couple of years from a move trying to extend his carrer.

To Stopgoat
I wouldn’t make the move now with Oswalt, but lets say by Mid/Late May, If Lidge is not healthy enough (and rememeber, he still has that knee that bothers him too) and Madson struggles, then the Phils will have to do something.. I would give every opportunity for Madson try to succeed in the Closer Role, but if he doesn’t than moving Oswalt over to the Closer Role would be my “Plan B” so he can find his rhythm and comfort level..
Remember come playoff time, you only need 3 Good Starters, but you have to have a strong bullpen and to be honest, the teams that typically win the World Sereis are the teams that usually have the deepest/strongest bullpens and not neccessarily the best Starting Pitching since so many games are close and come down to the 7th/8th & 9th Innings..
COme playoff time, you could have Starting Rotation of Halliday,Lee,Hamels and use Blanton as 4th Starter in a long series or long/middle relief, than have a back-end BUllpen of Contreras,Madson & Oswalt which would be pretty strong (but the Phils still need a top Left-Hand Reliever too)