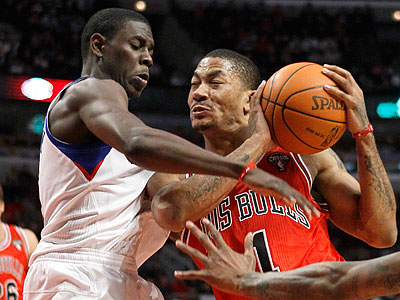 Sixers point guard Jrue Holiday and his teammates made quite a statement last night as they beat the Eastern Conference-leading Chicago Bulls on their home court. Holiday battled against the guy, Derrick Rose, who most NBA onlookers believe will be the league MVP this year.

Rose outplayed him, by outscoring him 31 points to 12, but Holiday did help force Rose into 10 turnovers, which was a season high

for him. The battle against Rose was another opportunity for Holiday to learn.

With the win, Holiday and the 76ers are by far one of the most surprising teams this season. They are 11-7 since the All-Star break despite losing five of their last nine games.

They’re currently in a battle for the sixth seed in the Eastern Conference playoff race with the New York Knicks, and have an outside chance at passing the Atlanta Hawks for the fifth spot.

To think that the 76ers have a chance at winning a championship this season is beyond zany, so the main goal for the Sixers is to make the playoffs and allow the young players on the team to experience what an NBA playoff series is all about.

Holiday is one their players who will definitely benefit from playing in the post season. His season has been filled with ups and downs, and gaining playoff experience would be a huge learning opportunity for him.

“I’m really just excited to be in the Playoffs. Excited to get this chance to go there. It’ll be my first time in the playoffs, and I’m happy to help bring that back to the city and make the city proud,” said Holiday.

If this season is any indication what can happen when Holiday is given the chance to learn through experiencing what it’s like, only good will come from this.

Last season he played in 73 of the 82 games, and started 51 times (he’s started every game this season). He averaged around 24 minutes per games as opposed to over 35 this year. His production wasn’t the greatest either.

He only averaged 8 points, 2.6 rebounds, and 3.8 assist per game. This season is way different, his points (13.8), rebounds (4.1) and assist (6.2) are all up.
“Even though I played last year, it wasn’t competitive. It really didn’t matter if we won or lost by the time I started playing…I don’t really remember much from last year.”

How far the Sixers go this year and in the future depends a lot on how much Holiday develops. He’s one of the bright young point guards in the NBA, and has a gigantic ceiling above his potential.

He’s improved a lot by actually getting a chance to play and being able to learn from his mistakes. So although making a serious run at a championship isn’t a possibility this year for the Sixers, the post season knowledge and experience Holiday will gain by making the playoffs is priceless.

Issues To Be Addressed In Phillies On Deck Series