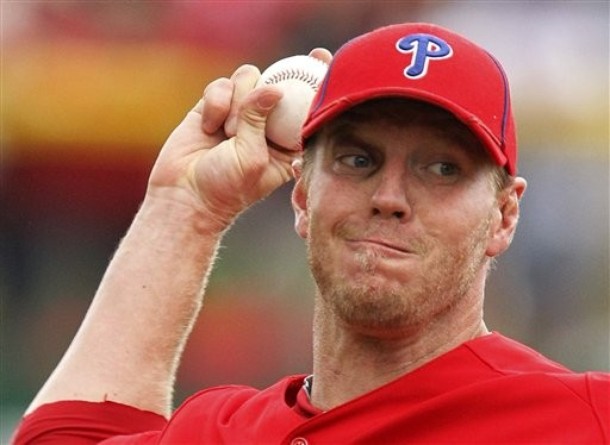 The Philadelphia Phillies are all in.

No longer an up and coming team, Ruben Amaro Jr and David Montgomery made it clear they are now one of the big boys in the MLB when they signed Cliff Lee. With that declaration came big expectations, especially from the fans that have made a $167 million dollar pay roll possible.

With the season finally arriving, it is time for the Phillies to back up all of the expectations. Here are some of my predictions for the upcoming season:

Analysis: Anytime four of the top 6 pitchers favored to win the Cy Young are in your rotation, you’re in pretty good shape. Tim

Lincecum appears to be the only pitcher in the way of a Phillie taking home the award for the second year in a row, and you could make an argument for any of the “Big Four”.

Cliff Lee was dominant during his first time around with the Phillies, and would have won the CY Young that season had he pitched in the NL the whole season. Roy Oswalt is in a contract season, with a club buyout of $2 million this offseason. Oswalt was undefeated in Citizens Bank Park last season, and could rack up the wins as he will face the opposing teams 3rd best pitcher each night.

If any pitcher will benefit from facing weaker opposition it is Cole Hamels, who has gone from going up against a teams ace to a back of the order quality pitcher. Hamels has always been a victim of poor run support, but that should change this year. Hamels struggled through Spring Training, but that is nothing new. While he may give up his fair share of long balls, Hamels has a real chance at 18 wins this season, making him a serious Cy Young Candidate. As for Roy Halladay, the favorite to win the award, his numbers will only improve after having a year to learn the NL hitters.

Analysis: If history has taught us anything, it is that players in contract years are capable of amazing things. It has also taught us that

when a player who has fight in them has something to prove, they prove it. Both of those cases apply to Jimmy Rollins this season. Rollins is a fan favorite, but most have written him off this year, citing his declining numbers over the last 4 seasons.

Yes, his best days are behind him, but Rollins came into this season in great shape after playing under 100 games last season- which is the first time since his rookie year. Rollins has played over 130 games 9 of the last 10 seasons, and 3 of the last 4. If you project his 2010 numbers over 130 games instead of 88, Rollins numbers would be comparable to the season the Phillies won the World Series, as well as his 2009 numbers. Rollins has batted under .250 only once (last season) in the past 8 seasons, so .256 is not unreasonable. I think Rollins has a bounce back year, and gets over .256- and another contract from the Phillies.

The Bet: Over HR’s, Under RBI

Analysis: This is a big season for Ryan Howard. The last image fans have of him is the bat sitting on his shoulder, after turning in an

awful series against the Giants. Teams around the league are starting to figure him out, throwing him anything but a fastball and daring him to hit it. Howard had his worst statistical year since 2005 last season, and while many people blame that on injuries, he still played 143 games.

Howard played 144 games in 2007, but still had considerably more homeruns (47-31) and RBI’s (149-108). A key question for Howard will be protection, as his sandwich of Chase Utley and Jayson Werth are now gone. Still, Howard has hit over 45 home runs every year since 2005, so the 35 number seems low. His RBI’s will suffer from a lineup that is not what it used to be, but expect an MVP caliber season from Howard in 2011.

Analysis: Has a spring training in which a team had a winning record, and their Ace had an ERA under 1 ever scared fans more then

this one? 2 months ago, any Phillies fan would have bet their life savings on their team winning over 96 games. It seemed logical, since the team had improved its victory total each year since 2006.

The Phillies won 97 games last year despite loosing Rollins, Utley and Howard for more then 140 games. They also played the first half of the season with a rotation that, besides Halladay, featured a struggling Hamels and not much else. Brad Lidge will miss time this year, but Jose Contreras was 4 for 4 last season in saves, and Madson is one of the best set up men in the game. Jayson Werth’s right handed bat will be missed, but the addition of Lee and Oswalt (for a full season) more then make up for him. Will the Phillies break the record for wins in a season? Most likely not. But they will be better then last year, which means winning over 96 games.

Can The Braves Overtake The Phillies?

Analysis: The Braves gave the Phillies problems last season, as they actually spent more days in first then the Phillies did. The Braves offense should be better this season, as the addition of Dan Uggla will help. It will also be Jayson Heyward’s second season after an impressive rookie campaign.

Can The Phillies Win It All?

Analysis: At one point, picking the Phillies to win the World Series would have been the easy way out. Not so much anymore. Of the

The Phillies are becoming the victim of two things. One, over reaction to a bad spring training. Two, everybody’s sudden love affair with the Braves. It seems every year, a team is picked by experts to be a “sleeper”. But how many times do they live up to the hype? Not many. The Braves are a good team, and have a brighter future then the Phillies. But they are not better then the Phillies this season. The San Francisco Giants are a real threat to the Phillies, as both Halladay and Oswalt struggle against them.

The Phillies lost to the Giants because the bats went cold at the wrong time and Cody Ross played out of his mind. Still, if Joe Blanton does not start Game 4, who knows how that series ends. The difference this year will be Cliff Lee, who has a 3-0 record against the Giants with a 1.13 ERA. A team has not repeated as World Series Champions since 2000, and the Giants will not break that trend this year. If the Phillies do make the World Series, chances are they will face the Red Sox- who 34 of the 46 experts picks to win the World Series. The Red Sox have a dangerous line up, especially with the addition of Carl Crawford this offseason. The Phillies have more post season experience then the Red Sox, as 3 of the Big 4 pitchers have pitched in the World Series. Red Sox-Phillies would be a great series, and a chance for the Phillies to put a stamp on the 2011 season by beating a storied franchise in the Red Sox.

Will the Phillies have what it takes to overtake the Red Sox and win the World Series?