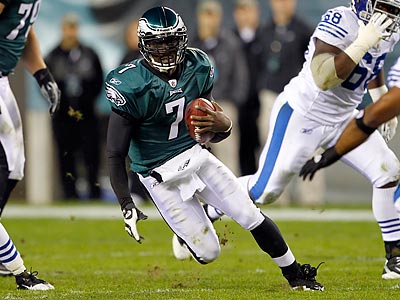 EA Sports had simply named an athlete to be on the cover of it’s Madden Football game each year, but one of their executives came up with a brilliant idea this year. They’ve decided to have a tournament between current NFL stars to see which player NFL fans want to see on the front of this year’s game.

Eagles quarterback Michael Vick is competing in the tournament and in the first round he received more votes from the fans in order to beat Cowboys linebacker DeMarcus Ware.

Now PETA, People for the Ethical Treatment of Animals want EA Sports to remove Vick from the tournament because of his previous involvement in dogfighting. They took made their demands to EA Sports president Peter Moore, but he’s decided to stand strong in support of Vick.

“I can tell you we’ve already received the letters from our good friends at PETA urging us to take him out of the bracket,” Moore said at the World Congress of Sports, through CNBC. “I’m not here to comment on what he did. I personally believe, and this is personal commentary right now, that Michael served his time. He’s had a tremendous season.”

“We believe that Michael Vick, as the runner-up in MVP for the league and the comeback player of the year, deserved his slot,” Moore added.

It looks like Vick will continue to win in the foreseeable future of the tournament because he faces Texans wideout Andre Johnson in the second round of the tournament. It shouldn’t be much of a contest.

Somebody Get A Tissue For Isiah Thomas

What part of the video game (and I know it intimately) involves players character, criminal record, public opinion, ethics…etc…. NONE They have speed stats for defensive tackles in the game for crying out loud, but nothing for that stuff. And they shouldn’t.

PETA needs to realize that there’s way too many serioulsy important human issues to worry about a digital image of a football player on a video game, let alone animal rights over people’s!

You seriously think any animal gives a shit about the cover of madden!? You’d have to soak a video game case in bacon or have an animal piss on it to get a dog to give two shits about it. Period.

I don’t understand people that say PETA needs to shut up. They have just as much right to voice their opinion about Michael Vick getting this opportunity as EA has to put him in the tournament. It’s clear to me that EA was looking for a public reaction. It’s fine to defend EA choosing Michael Vick to represent the Eagles, but they make zero sense when they say he deserved it because he was the runner up MVP and yet they put Danny Woodhead in the tournament over Tom Brady (the actual MVP).

Me too, it’s bad luck, we need this guy. Screw peta

I’m with PETA on this one.

A show that I seem to enjoy on my days off from work is MAN VS. WILD…….. With Host Bear Grylls……

Its funny to me to see this guy take an alligator and slam it’s head senseless on the ground….. And then take a RAMBO knife and give the POOR alligator one last TATOO…… A real nice BLOW HOLE………. He either cooks it on an open fire or eats it sushi style with a smile from ear to ear acting as if he’s in RED LOBSTER with a shirt on his lap like its a dinner napkin……. I wonder if PETA bothers him?????? Or is it just killing for survival???? Or just for his own personal thrill and get a nice paycheck with endorsements with dick’s sporting goods etc…… I know the Crocodile hunter will have his ass when Bear Grylls passes on….. LOL!!!!! NOT SAYING WHAT VICK DID WAS RIGHT……… But cruelty is cruelty!!!!!!! JUST MY TAKE ON IT!!!

I hope they dont put Vick on the front cover of MADDEN……. It’s a serious curse……..

I think Zinman furs should use Vick as their spokesperson…lol..

PETA needs to get a life.

I would have alot more respect for PETA if they didn’t take any money from the Eagles when they signed him. If they were that strong in their convictions they wouldn’t have taken a red cent from Jeff Lurie.

Apparently, some beliefs can be bought.

It’s not only because Vick killed and tortured dogs for over five years, or because there were mass graves of dogs on his property, its also because of the delight Vick took in their suffering and demise. That being said, banning Vick from the cover is censorship – so let the voters decide.

walker, so once he killed all the dogs, you’d much rather he put their corpses… um… where? as opposed to the mass graves? But seriously, censorship aside, the man was ruined financially, went to jail, got a criminal record, had to deal with the public court of opinion… all that stuff that was relevant to his behavior….

But the Madden cover is about football skills. Nothing else. Drew Brees wasn’t on the last cover because he’s an upstanding citizen. Not because he has a clean record. The man go superbowl MVP.

There’s a context for everything.

Don’t get me wrong, Vick was definitely in the wrong — but I don’t think he should have done time nor been punished the way he was.