Somebody Get A Tissue For Isiah Thomas 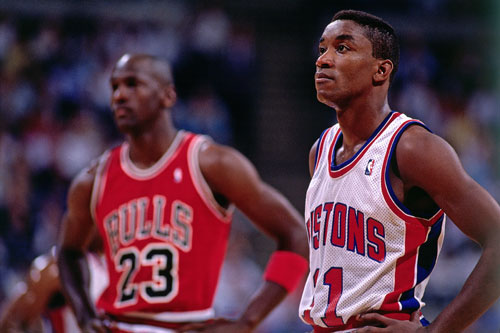 Former Detroit Pistons great Isiah Thomas was interviewed by Bill Reiter of FoxSports and he seemed to have a chip on his shoulder. Thomas helped the Pistons win two NBA Championships but you rarely hear his name mentioned when talks come up about the greatest NBA players of All-Time.

Michael Jordan led the Bulls to six titles, Earvin “Magic” Johnson led the Lakers to five titles, Larry Bird led the Celtics to three titles. Thomas doesn’t feel he’s given his proper respect because he achieved so much despite being only 6’1″.

Unfortunately for Isiah, he was born 6’1″ which means he’s got to work with the cards he was dealt.

The Phillies Second To The Yankees In MLB Salaries

Why did you have to bring up Isiah Thomas, G..
I was hoping to get throught the remainder of the basketball season without hearing someting stupid from this whiner…. He needs to let it go and enjoy his post-basketball life which it appears he has a very difficult time in doing like so many other athletes…

But zeke has only himself to blame for not acting petty like the rest of the girls… He cant adjust his personality to fit with the the Bird’s and the Jordan’s and Johnson’s. If he values being looked at like those other people, he needs to act like them or simply man up and proud of who he is and what he has done regardless of who recognizes..

his accomplishments speak for themselves just like the other stars do.

Isiah Thomas was born 6’1!? WOW Thats more amazing than anything he ever did on the court!

I was never a big fan of Zeke as a kid (probably because of the all-star freeze out of MJ in ’84 – which led to his 1992 Dream Team snubbing) but I wouldn’t dare question his game. I don’t think too many of your readers remember his battles with Bernard King in the ’84 Playoffs or his 25 points in one quarter on a busted ankle against the Lakers in the ’88 Finals. I really don’t care about off the court stuff, I know that a handful of guards come to mind when it comes to guys in that 6’1″ and under range: Tiny Archibald, Isiah Thomas, John Stockton and Allen Iverson.

Classy: “I beat the s— out of them when they were that big. If we were all the same size, f—.”

Zeke knows what the NBA was all about then ” Politics as Usual ”
Magic and Larry and Michael were credited with reviving the league. Isiah and the Pistons were credited with bringing down the beauty of the game with their “Bad Boy” antics.
And Dennis Rodman said it first ” if Bird was black he would be just another guy ” This came after a tough series loss in which they on an errant pass by Isiah…Zeke just agreed with Rodman….