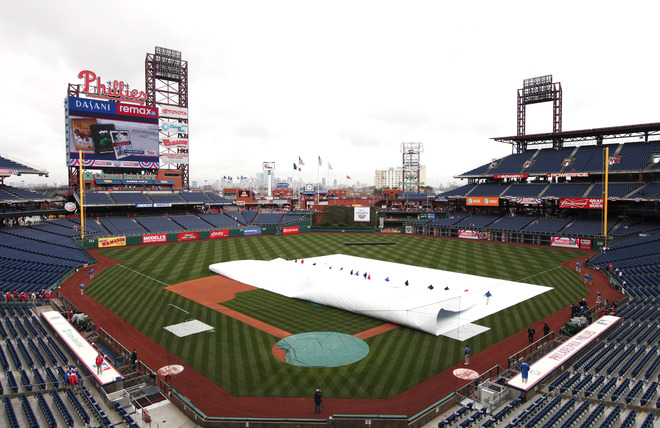 The tarp was on the field earlier, now it’s been taking off and Charlie Manuel has made up the lineup for today’s game. He’s decided to put Jimmy Rollins in the third spot, which I like because it’s going to put some pressure on Rollins, who I think can deal with it. He’s entering the season with something to prove and I think he will see quite a few fastballs while hitting in front of Ryan Howard.

Rollins has always hit like he was hitting in the three spot anyway, so I don’t think it’s change which is good. Phillies fans have talked about him changing his approach at the plate, but we all know that’s not going to happen.

Victorino will lead off and he can do a good job there by getting on base and putting pressure on the pitcher by being a threat to steal.

I think the fact Ibanez is 39-years old hasn’t been talked about enough. He’s going to need days off each week, so that’s going to mean John Mayberry will play quite a bit.

So many times a guy like Francisco has his weaknesses exposed when he becomes a starter. Hopefully he follows what happened with Jayson Werth. He earns himself a starting job and goes on to sign a $120 million dollar contract.