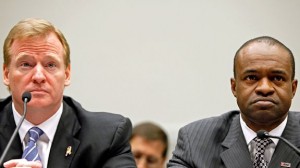 The NFL players have no chance of winning the public relations’ battle during the NFL lockout, most of the news people, who are covering the work stoppage, are employed by companies which are partners with the NFL owners. ESPN, CBS Sports, NBC Sports and Fox Sports are all partners of the NFL owners, so you know they’re not going to hurt their partners.

John Clayton of ESPN made the mistake of mentioning the owners have turned down a meeting with the players.

“Lawyers for the owners refuse to meet with the settlement attorneys for the players unless the trade association identifies itself as a union, which the players won’t do at this time. The players, according to multiple sources, planned to meet with the owners March 28 and spend the week settling this mess. All that had to be done was have a short document go to federal judge Susan Nelson’s court saying that the NFLPA’s executive board would serve as advisers. The NFL’s answer was no. This will be the only way a deal can be reached. Like you, we all wish both sides would go to the bargaining table instead of the courts.”

I don’t know when this lockout is going to end, but I do know that it’s not going to be settled without both sides sitting down at the negotiating table.

With Lou Williams Out: Will Evan Turner Step Up?

Apparently, you haven’t read ANY of Michael Silver’s columns on this for Yahoo sports. He’s been absolutely scathing of the owners–as has Les Carpenter and a few others. Well, the PLAYERS walked away from the table–and when the owners tried to get them to continue negotiating, they refused. So, as the opening date of the trial gets nearer, the owners are pretty confident of a win–therefore they have no incentive to continue negotiating.

The players had a deadline to de-certify, which the owners knew. The owners waited until the last minute to put out that proposal, knowing full well that the players would not have time to evaluate it in depth. Would you take a deal, or give up a move you needed to make, for a last minute deal from someone you can’t trust? Remember, it was the Goodell-lead owners that breached their obligation under the former CBA by negotiating a $4 billion dollar payout from the TV networks for this season even if there were no games played. Under the CBA, the league had the obligation to maximize TV revenues, not make back door deals that favored the owners over the players.

I don’t blame the Owners for not sitting down with the NFLPA’s executive board. Since the NFLPA decertified they no longer have the power to negotiate a collective bargaining agreement. If the NFLPA wanted to continue negotiating they should have extended the current agreement on March 11, like the Owners wanted too. Instead they wanted to take the case to court – they can’t have it both ways…

If I am the NFL Owners and Commisioner,
I would start promoting tryouts for their teams.. Within 2 years, 85% of Today’s Current players will make their own deals to play football again since they are technically not a part of a Players Union any longer and will do what they have to do to earn a living.. Some of Big Stars can sit out and or retire (Manning,Brees, but will eventually be replaced by other players and Football Players are a dime a dozen if you ask me..) I would post Tryouts Starting May 1st 2011 all around NFL Cities and plan to move forward with Football if I was the Owners

I completely agree, Paulman. The owners need to call the players’ bluff. Let’s see how unified they after a few months without pay.

Rake, I disagree with your assessment. The players were never there to negotiate..their whole plan from the beginning was to go to court and many have expressed this over and over again because they feel thats the only way for them to get a deal their looking for. The owners probably knew the last minute deal you are a referring too wasn’t going to be right then and there accepted but the point was to continue negotiations with something on the table and keep working…The players didn’t have to agree to it. All they had to do was say lets continue and do another extension. But they walked, calling it the worst deal ever without ever giving a counter offer. (all they wanted was to go to court)

I must say though I admire G’s determination in doing whatever he can to try and get fans to jump on the player’s side. Mr Cobb you can believe that the national media is pushing fans to side with the owners because their being paid by the NFL to write stories. But, as a fan, I can tell you the players gave off that negative feeling towards them from their own stupidty and ridiculous remarks in the media themselves. (We are treated like slaves nonsense). And most fans who work hard just to have jobs would be fired on the spot if they were asking what the players are asking from their boss.

All in all, both sides are complete fools and are at fault in this crap. Both sides care more about how they are being perceived in the media by trying to antagonize the other instead of just finding a way to split 9 billion dollars in some kind of fair way. The last thing they should be both doing is pushing their gold mine away from this game..the fans.

Also, you mentioned how the owners were so wrong by having their own lockout fund in case no games were to be played but yet didn’t mention the players have planned the same thing for the past two years. Players that are eligible will be getting payments by the NFLPA(thought they were “decertified”) on a normal basis in case there is no football by a private fund that was established before any of this. But its not ok for the owners?

It figures Paulman would side with the owners. Let’s see.. majority of NFL players are black, all the NFL owners are White. I see, so the super rich few should definitely have the most of the revenue and the players should just be thankful. I understand.

Has nothing to do with race Rasatdoc,
My point is too many fans get to emotionally invovled/attached to the player and not the team that they are playing for.. Good players come and go in my book,. it’s a life they choose, are rewarded nicely for their talents and skills and soome fo get some bad breaks as far as injuries but many become very wealthy for playing a sport where they may have not had many opportunites outside of Atheltics, I say to the Players go ahead and try to get as much a syou can for the short time that you play and and I say to the Owners, If you don’t want to deal with this current player pool that’s out there, then go find 60-75 Players who want to play and sign them, coach them up and play some football.. I follow the teams and could really care less whether it’s Peyton Manning throwing a TD Pass or Adam DeMichelle throwing that pass… It really doesn’t matter if David Akers makes the Field Goal or if it’s John Doe kicks it through… I am about the team and not the players, for today’s Athletics is way too transient for me to get emoitionally attached to any players and why should I .. I cheer for the Eagles

Even more ranting from an idiot. I cheer for the Eagles, but when you cheer for a team, you get attached to the players that perform for your team and there is NOTHING wrong with that.

I have to admit Schill, that was a good one… ha ha

Are you a physician?

Paulman,
For all the sh*t you take on this site, at least you don’t take the bait from morons like “rastadoc”. He essentially calls you a racist, but has probably never met you.

paulman ins’t a racit, he’s a person. He’s a person that can be accurately called an instigator, but he’s no racist.