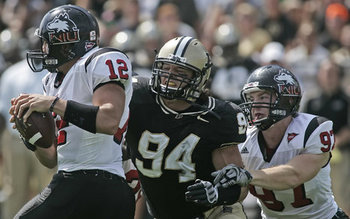 It’s a toss up right now in regards to who will be the number one pick but it’s likely to be one of two quarterbacks, Blaine Gabbert or Cam Newton. The Carolina Panthers are doing their homework and we’ll have to wait and see which one of the quarterbacks they grab.

With all of the top offensive tackles; Tyron Smith, Anthony Castonzo, Gabe Carimi, Nate Solder, and Mike Pouncey off the board, the Birds will grab the best player available, Purdue’s Ryan Kerrigan, at a position that they’re still not sure about and that’s defensive end. They still feel good about Brandon Graham but they can’t be sure. Daniel Te’o Nesheim has a long way to go before he proves he can even play in this league. Ricky Sapp is also a major question mark.

They know they can’t expect much more from veteran defensive end Juqua Parker, who seems to continue to make plays and out play everybody the Birds get to replace him.

Quite a few teams now have Alabama’s Julio Jones as their top wide receiver in the draft. He blew away everybody at this year’s NFL Combine and the momentum he started hasn’t stopped.

Kerrigan is a tremendous football player with great size, speed and pass rushing ability. I would love to see the Birds finally get a defensive who has some size. I’m tired of all the undersized mistakes.

Yes if they make move of drafting Kerrigan, they will still be in position to help themselves at cornerback and on the offensive line later in the draft.

Da’Quan Bowers didn’t test well in his Pro Day and they’re still questions about his surgically-repaired knee, so I see him falling all the way to the New York Jets, who won’t be able to pass him up because of his tremendous potential.

Something tells me we trade up and select Pouncey.

I also think Carolina picks a Defensive Player because Fox likes to build arounf his defense.

I also like Cincinnati to trade Palmer and somehow acquire the #3 pick and take Newton.

The Eagles need to get this right and grab Carmini and Pouncey somehow.

so many things here atra: Fox is no longer the coach in Carolina, Mike Brown doesn’t trade guys who demand trades, and trades probably won’t even be possible with no CBA.

atra, Fox is the head coach of the Denver Broncos now, and Carolina is in serious need of a QB…I have no idea what they’ll do, but…..

Remember Atra-Selzer
Carolina has a new HC in Ron Rivera (Also defensive minded)
John Fox is now HC of the Denver Broncos who have the 2nd Overall Pick
and will most likley take a DL
I see the Panthers selecting DT M Dareus and the Broncos going with CB Peterson
I also am going to assume that no player movement or trading will be allowed this Draft (unless a new CBA in place or a seperate agreement that is made which I don’t see happening at this point and time..
Eagles will be stuck with Kolb until a new CBA is in place..

Re-PAnthers
If you think about it, new HC, why don’t you build up your defense with high draft picks and play QB J Claussen for 2011.. Maybe they win 2-4 games and then could be in the running for a real QB in Andrew Luck for 2012 Draft.. If you are the Panthers, you are most likely not going to compete with the Falcons,SAints and even the Bucs in you own division for the next 2 seasons anyway, so why not plan and play for the Future..
If you are the Panthers, you have to answer, is Drafting and going with either QB Gabbert or Newton a big enough updgrade over current QB Clausen to make a real difference for this club.. I don’t think so myself,, I would draft DL help and roll the dice with Clausen for 2011 and if he falls on his face, then I would probably end up draft Andrew Luck from Stanford in 2012 Draft..

I think the problem with this draft is that there is almost no clear cut #1 choice. There are plenty of guys smashed between the #5-#20 value in talent, which is good for the 2nd and 3rd rounds, but who really wants to have a top 5 pick this year? I mean Patrick Paterson and Prince A. look to be a great Pros, but top 5 picks??? Same with all those DT’s and OT’s.

And I don’t really see Buffalo or Carolina taking a QB in this draft. I think Ryan Fitzpatrick will be serviceable enough for the talent level of their team right now, but they have HUGE wholes to fill everywhere else. Same with Carolina. It sorta reminds me of the 2005 draft when San Fran took Alex Smith cuz they really needed a QB, but missed out on strengthening the rest of their team with 9 future pro bowlers in the first round (Ronnie Brown-RB (though they took Frank Gore the year before), Braylon Edwards-WR, Antrell Role-DB, DeMarcus Ware-LB, Shawne Merriman-LB, Jamaal Brown-OT, Aaron Rodgers-QB (but I guess they valued Alex Smith higher for some reason), Roddy White-WR, Heath Miller-TE, and Logan Mankins-G).

I agree with Paulman too, but your faux love of the Panthers is grating on me 😉 (I know you live down there now, but I’ve read more Panthers football info in the past 4 months I’ve been coming to this site then I ever even thought possible)

Paulman’s Mock NFL Draft (#6 Edition)
(I am assuming no trades between teams,picks or players since no CBA)

nice mock G –
I love the Kerrigan pick….actually think the Eagles do DT or DE at #23….Brandon Graham is not healthy and not expected to be this season….just an FYI to all those who think he will be… he is only 70% right now and rehabbing away from Nova Care and in Michigan, which means who knows what he is doing …..Kerrigan and Aldon Smith fit Washburn’s scheme….Pouncey is not a value pick…the guy is not as talented as his brother and is a round 2 value pick….

A good pick Jott1972 and I would not be surprised if a DE is selected by the EAgles at #23.. Graham’s status for 2011 (at least thru October is questionable, and J Parker is at the stage of his career of being a part-time, pass rushing specialiast who is is weak versus the run.. I am still not sold on Teo & Sapp ever being product NFL DE’s which leaves the Eagles pretty thin at the position..
A surprise pick could be OLB/DE J Houston from Georgia who at 6-3 265lbs can really get after the QB and in the backfield ..He’s probably best suited for a 3-4 Alignment but possible could be effective in the 3 pt stance of a 4 man DL Front.. He is a beast though and gets after it as does Kerrigan..

@paulman
I was at the Eagles chalk-talk event sponsored by Verizon last week. I spoke to coach Washburn and he thinks after Trent Cole the DE situation is not good. He stated the DT’s are really good and that they were not utilized correctly last year. He thinks Patterson is a pro bowl player now and Bunkley and Dixon have the talent to be studs in his scheme. He told us he is going to take thr seat belts off the lineman and let them go after the QB, whereas, the old scheme was read and react based upon the movement of the o-guards…

Good stuff Jott1972,
I really like Coach Washburn, who pulls no punches and tells it like it is..
I think there will be a vast improvement from Bunkley,Dixon,Tapp from his Coaching style and schemes.. I do agree with you/he that DE is a position of need for lots of unkowns and this is probably Parkers final season and the Eagles will be real careful with B Graham coming back off that injury and surgery will be eased back into action and I expect him to start 2011 on the PUP list and not really make an impact until late 2011 Season if at all

@Paulman –
I want the Eagles to trade up to grab Aldon Smith….he reminds me so much of Simeon Rice and would be a beast in the Eagles new scheme….it will take #23 & 54 to move to #13 ahead of the Rams, but I would do it.

I am not completely sold on DE Aldon SMith (has a great upside) but has only played 1 full season at the College level.. I would not trade up and give up a
#23 & #54 for anyone in this Yea’r Draft