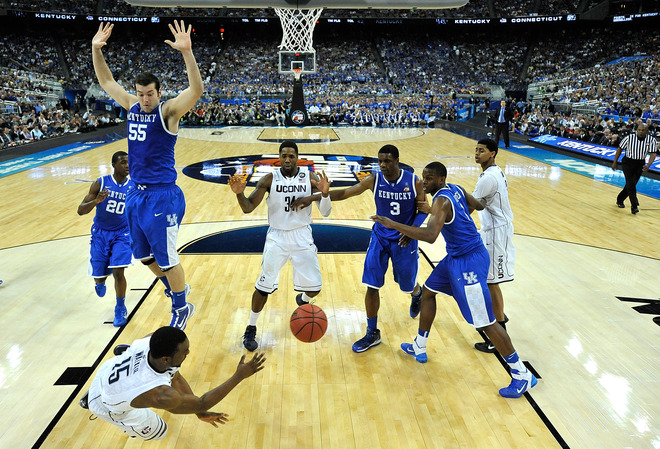 I think it’s ironic that Americans are angered by U.S. multi-national companiies which leave the states in search of cheap labor, bu they have no problem with the NCAA which brings in billions of dollars each year, but doesn’t have to compensate its workers, of course the workers, also have the need to keep a paystub too to keep everything organized.

The NCAA Men’s Basketball Final Four wraps up tonight with the title game between Butler and UConn on CBS. PBS produced a program talking about the enormous sums of money that are being made in college basketball and the fact that people who are the centerpiece of this production, the players are left out of the money grab.

The NCAA is paid about $800 million dollars a year for the basketball tournament, which totals $11 billion dollars over the next 14 years. Yes you didn’t read that wrong, that’s $800,000,000 dollars for the men’s basketball tournament per year and $11,000,000,000. That doesn’t include all the money that’s made off of the baseball caps and T-shirts, along with the DVD rights, nor the millions that are made during the regular season from ESPN and other sports networks.

The piece exposes the way coaches and administrators salaries have skyrocketed as the revenue has increased, so that they now make millions of dollars while the players don’t receive any financial benefit. It shows us how the NCAA makes additional millions of dollars selling the names and images of players to EA Sports for their video games, but the players receive no compensation after their college careers are completed.

Check it out and tell me what you think.

Players get a free education,free coaching and a national audience to display their abilities.

They are more the welcome to go to Europe for a couple of seaons, make money, and then enter the NBA draft.

I call it a legal way to pimp…… A lot of these players in the NCAA end up working for AUTO BELL if they dont pursue a career in Basketball…….. At least overseas or play in the D-league and only make 20,000-24,000 a year…… A lot of this is because of the economy that a lot of these young kids cant receive jobs within their field……. Just 4 years of good memories……. And picking up a drug/alcohol habit and 10years from now we’ll be seeing a player on ESPN BEHIND THE LINES early sunday morning as a trash man in his local hometown!!!!!!!! It’s been proven…….

Once again, people who are training to be “professionals” in their field are not guaranteed a job either. In fact, if they do get a job in their respective field. it takes them years and sometimes decades to pay off the debt. Also, these athletes get to go to school for free. The other overwhelming majority of students go into insane amounts of debt to go to school. When I’m done with my 7 years of education, I’m going to owe about $250,000. I got no financial aid even though my parents are divorced and my father only makes about $120,000 a year. That doesn’t even take into account my brother that goes to the same school and owes even more cause he did not get as large of a scholarship. It also doesn’t take into account what my parents are paying which is over half for each of us (the first four years). These “gifted” people are paid by not having to pay for school.

Why do people ignore the fact that they actually do get compensated. These players get to go to these major noteworthy universities around the country for FREE when they probably can’t even multiply fractions or write a paper by themselves…It is very difficult for someone to get into these major universities like Duke, North Carolina, Notre Dame etc especially when they are just a normal kid trying to get a college degree to hopefully better his/her life. But yet, if your an excellent football or basketball player your basically getting a free pass and are offered free education because you have a jump shot.
Now thats fine with me…Im just saying that these kids are already complensated and given free educations at great institutions that would cost others $100,000 or more..People need to stop treating atheletes like babies when their grown people..When one is given an opportunity that these atheletes are given it is up to them to take full advatage of it. Its the player’s decision if they want to leave college early for the potential fame and fortune instead of getting a free college degree that might be something for them to fall back on if all goes wrong. I just can’t feel sorry for a guy that ends up suffering career ending injury in his first pro game after he left his free education to jump to the NBA early. Again, these players are adults and they make their own decisions that they have to live with. I don’t know what I would do if I was in the position that some of the players are in. I can tell you that if my pro career failed, after I made my own decision to jump early and leave the free college degree that I was offered, I would not be conducting interviews on TV for people to feel sorry for me.

Some of you are IDIOTS!!! I was a full scholarship athlete who later became a doctor. I made all-american in track and field and our team won two division 1 national championships. My head coach HATED the fact that I was taking courses that interfered with practice. Most of the scholarship athletes were ACTIVELY dissuaded from taking hard classes or a lot of credit hours during the semester of our sports seasons. For you knuckleheads to act as though allowing a kid to walk around campus and sit in classes while pressuring them to focus mainly on their athletic activities is fair compensation while the coaches make MILLIONS of dollars as do the schools is just asinine. What in the heck are you thinking!! We’re talking MILLIONS of dollars!!! I just can’t understand why you think that these players aren’t being exploited. Boy, you wonder how rich people keep winning? it’s jack asses like you!!

rasta, that’s great that you excelled in athletics and academics. It really truly is. But do you think that’s the norm? And, with all due respect, is track and field really what we’re talking about here? It’s pretty much only football and basketball in college that brings in the significant $.

If the college players were paid a fair share of the NCAA money, would the football and basketball players get 90% of the money? Or would the track and field, and women’s lacross etc… get a fair share?

And Rasta, what would motivate the student athletes to go to class at all if they were getting paid ridiculous money to play sports?

These players’ talents have not only paid for their own educations but countless other students’ educations, both athletic and academic.

If a student receives an academic scholarship and invents something which profits millions of dollars, it’s his or her to keep. While an athlete is completely prohibited from earning any money.

Sorry, it’s a double standard. It’s wrong, and some these view are shortsighted.

What motivates a student to stay in school if he’s invented something such as Google?

Drummer, in order, nothing (and how many blockbuster inventers are there v. Student athletes, come on!), and I don’t know. I’m not going to pretend to have a number, but I stand by my comment, and its been widley reported.

The number of students who make blockbuster inventions doesn’t matter. The point is that other students have the right to earn while are stripped of their rights. Basically, it’s un-American.

These same athletes generate the money for scholarships, salaries, etc. Again, their talents more than pay for their educations as well as many others.

drummer, actually, it does matter. You’re trying to make an anaolgy, and it’s a really bad one. Nobody is saying the athletes should get paid for having a freakish breakthrough in their academics. And the inventors don’t get paid by the school. There’s not a single part of your analogy that works at all.

And the inventors don’t generate money for the school. They may choose to donate it once they make it big, but comparing reasearch money to paying student athletes isn’t even in the apples to oranges range, it’s comparing apples to cinder blocks.

G:
No. Carry it to its absurd conclusion. How much is ESPN making off of the High School Basketball and Football Games. And I’m quite sure that’s a growth market. Should they also be compensated? If so, how? What do YOU think?

Clearly what is going on with the NCAA is against the principals of this country. The people who do the work are supposed to be the people who are compensated. How many adults in this country are willing to give up their salaries for scholarships? This is generational theft on a massive scale.

garry, that’s a silly question – nobody would trade their salary for a scholarship because scholarships are for college students and salaries are professionals. PERIOD. If you want to pay college student athelets salaries, then abolish college sports altogther (or just football and basketball cuase thats what makes the money), and tell the kids who want to play competitive sports to go pro after high school, and forget about education. As long as they are going to be students, or fake students, or have the education/connection to the college or university in some way at all, then they shouldn’t get salaries, because they’re not professionals.