Collins Should Put Iguodala On Wade & He Must Slow Him Down 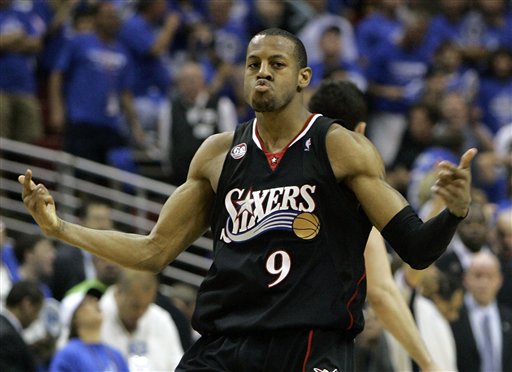 Now that it’s official that your team, your town, your Philadelphia 76ers are playing the Miami Heat, it’s time to look at a few of the individual match ups. With out disrespecting possibly the most popular member of the “Heatles”, LeBron James, the Sixers should choose to put their best defender, Andre Iguodala, on Dwyane Wade.

The Sixers and Heat faced each other three times with each game ending the same way, Miami pulling it out at the end. Wade averaged 30.6 points, 8 rebounds, and 6.6 assist during the three games against the 76ers, and almost had a triple double during the most recent game on March 25th.

Iguodala on the other hand wasn’t as productive. He averaged 13.3 points, 6.3 rebounds and 4.6 assist. Part of the reason why his numbers were so low is due to his defensive assignments. In almost every game he focused on slowing down James. Iguodala did play good defense on James, however the Sixers should challenge him to slow down Wade instead.

It’s kind of a double-edge sword because both Wade and James are capable of taking over a game. But James has proven to be effective even if he’s “shutdown” on offense. He is willing to get his teammates involved more than Wade appears to be. So if Iguodala is able to slow Wade down and force Miami’s other big name players to pick up his slack, they have a chance.

Nevertheless the Sixers need Iguodala to produce on the offensive end, along with playing lock down defense on Wade. The Sixers are a much better team when Iguodala is having an all around good game, and what better time for Iguodala to step up his game than the playoffs?

It won’t be an easy task stopping Wade, because he’s one of the best basketball players on the planet. However if Iguodala is able to turn Wade in to a volume shooter rather than allow him to take “good shots”, the Sixers will have a chance at stealing a game or two. However if he cannot slow Wade down, it will be a painful series to watch.

We Already Knew Bonds Used Steroids And Lied About It, Why Waste The Money On A Trial

Iguodala on Wade makes perfect sense……. Young on Lebron…….. And Brand or Hawes on that Homo Bosh…….. I want to see the Heat lose so so bad….. I dont want to see any MAN HUGS after this series…… LOL!…… Mike Bibby aka “MINI ME”, is a guy the sixers must watch for……. He has experience and can kill you with key shots…… They must keep an eye on him……. Other than that…… LETS GO SIXERS…..

jroc, love the enthusiasm. I personally think Bosh is a problem for us, the only caveat being that Bron and Wade wont give him the ball… but if they are clever and gameplan that way, – have their offense work from inside out – then I think we don’t stand a chance. That said, man, leave your personal problem with gays out of this, its SO irrelevant to the sixers/heat series.

Holliday will cause some probs for Bibbi and there whole squad if he can gain some early confidence.

Iggy needs to just shuffle and slide. Take it too the cup with reckless abandon and make them foul you.

Shiller…NBA players prolly call Bosh that…i dont think Jroc is got that in em.You could insert anything for that pillow paw.

@Shiller…… Who says MAN HUG……… If you were at work and a guy says…… “Business was great this month”……. “Lets all get a few MAN HUGS”, to seal our solidarity”!……… Yea I should have left that out but com on…… The players talk trash on the court and I pretty much sure Bosh hears that quite often after that MAN HUG comment……. I know I’ll use that to my advantage playing Bosh!!!!!! trust me…… This is the playoffs…… ANY MEANS NECESSARY……..

@Erock……. Holliday will give them a ton of problems……. It’s all about the benches performance as well….. When Wade and Lebron sits out….. Someone has to take advantage of that opportunity……. Their’s a lot of MILES on the legs of Lebron,Wade, Ilgauskas, Bibby, and Juan Howard….. The speed of the Sixers must take advantage of these South Beach Bums……

Brand will son all the bigmean early and often. We have some x-factors and i believe it will be competive.Heat in 7. Wear them down before we get back to Philly for p-off atmospere.

jroc, alright, whatever man, trash talk on the court is one thing, spreading hate towards gays on a sports talk website is another.

But agreed about our youth/speed. I think our D is going to severely annoy Miami no matter what happens in the end.

@Shiller……. So how did you feel about Kobe’s reaction to the ref?????? Did you think the NBA overreacted……. Or justice was served…… Or better yet will young kids learn from Kobe’s mistake and to not say such things……. NO……. We live in a world of judgement……. Yes I’m wrong for my statement towards Bosh…….. I’m not spreading hate……. But I hear young kids almost everyday say things like “All man…… that was Gay”! or dude your such fag…….. It’s called common slang in a joking manner……. If people can parade floating genitales in the middle of Manhattan during rush hour in time square…….. The same hours our kids are eating dinner and watching Sponge Bob than something isn’t right…… This is the world we live in……. This effects our children’s minds and when they see this it messes up their perspective on whats right and whats wrong…… Certain colleges wont allow gay coaches in certain schools…….. So before you comment on my comment do your research on spreading hate and you’ll see it’s deeper than me………..

jroc – I think Kobe was stupid for acting that way – sure tempers heat up in games like that, especially playoff time. But he has to be above that. And for what he actually said – again, I think he, and all of us, should rise up above it. He could have called a guy a prick or ass or jerk (whatever, there’s no lack of words that would be right there, we can all agree), but he chose the one that helps validate our cultural oppression of a certain type of person. I think the NBA was right, and I agree with you that it won’t solve anything. But it had to be done. Not doing it could help contribute to the problem. Sure people do it all the time, and many many young people. and YES – it is SO SO VERY deeper than you. It’s not about you or me at all. It’s about our culture. I just think we all need to step up and call eachother out on it so maybe, eventually it gets phased out.

I’m all for calling out a prick or having a way to express emotions to someone who did something wrong. But I think if we encourage eachother to do so without oppressing groups of people, eventually it will better for everyone.

South beach busters…get ya sunglasses on at night suckers and come to Philly where we help old ladies cross streets and toss bums 50cents for there pints. i dont like those dudes and im trash talking them until the series is over!!

Bibby should be a target of D.C….make J-rue take him off the dribble and respect the trey.

Bosh must be heckled into oblivion for his tight jeans and h.s. sweaters!!

What’s wrong with switching it up? Mix defenders up so that the Heat will not know where Iguadola is? If it’s done correctly, it would work. But Doug knows what he’s doing…unless he’s committed to accepting praise for this season and mentally moving on.

The thought of Evan Turner on Wade at some point in this series is keeping me up at night. Or do you go with a sloooowwwweeeerrrr but more physical Nocioni for 3-4 minutes and hope for the best?