Should Lidge Still Be The Closer If Contreras Remains Effective? 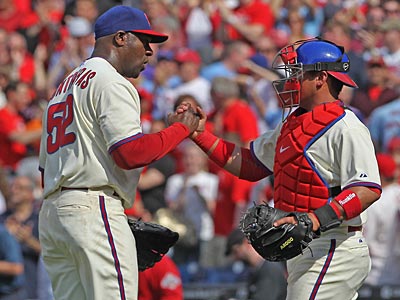 Jose Contreras has done a great job, so far filling in for Brad Lidge as the Phillies closer. Contreras is a perfect 4/4 in save opportunities, and has yet to allow a run this season. He hasn’t always pitched clean ninth innings, occasionally walking a batter or allowing a base hit, but he’s gotten the job done to this point.

If Contreras continues to be successful in the closer’s role, it’s going to create questions about whether or not Brad Lidge should be given an opportunity to return to the closer’s role when he comes off of the disabled list.

If Lidge can come back and show that he is still a viable option to close games, the Phillies could return Contreras to the seventh inning role. The seventh inning has been an issue so far for the Phillies this season, with David Herndon, Danys Baez, Kyle Kendrick, J.C. Romero, and Antonio Bastardo all being unreliable options, so far. None of these pitchers have shown that they are capable of consistently succeeding in anything other than a mop up role.

Returning Contreras to that role would provide more stability to a bullpen that is short on quality arms.

Contreras seems to be content with whatever role the Phillies assign to him. He isn’t the type of reliever that struggles with a mental approach towards pitching a different inning, other than what he is normally used to. Last season Contreras role changed throughout the season, he moved from the seventh inning role, to being the set-up man in the eighth inning, to the closer’s role. Moving Contreras around a little more this season wouldn’t have the effect that it might have on other pitchers.

There is still a long way to go before Brad Lidge can even think about returning to the Phillies this season. Luckily for the Phillies, Jose Contreras has shown that he is up to the challenging of serving as the team’s closer, a position that is critical for any team with championship aspirations to have. If Lidge still perform at a high level, it will only make the Phillies bullpen stronger. Because of the versatility of Contreras, the Phillies have nothing to lose by giving Lidge an opportunity when he returns.

Are Victorino & Polanco Better Than We Thought?

The Sixers’ Best Chance Of Stealing One Will Be Tonight

It’s not broken..so dont try and fix it. Jose is dealing right now.

If Contreras continues to Pitch like he has this season, I would ride that horse for as long as you can and have Lidge in more of a set-up role once he returns..
Lidge has had many injuries the last couple of Season with Knee,Shoullder and Elbow concerns, Maybe in a more limited roll, he can regain his velocity and movement on the ball which is when he is at his best , but if recent history is anything to go by, to expect him to return to 2008 form is not very realistic
and I would stay with COntrerars, Chances are, the Phils will need the combination of Lidge,Madson and Contraeras all to be healthy and pitching well if they are to get to another WS..

Contreras has pitched well but when lidge is ready to come back we gotta go back to him… but only if he’s at full strength. We haven’t seen the 2008 Lidge since 2008. Maybe if he rest longer then normal we can bring him back leading up to the playoffs.

Watching Contreras is like watching Lidge. They both take 20+ piches to get through the ninth inning. He’s getting the saves, but he puts himself on thin ice most every outing. Having both is great because 1 guy would wear down if that’s all the Phils had.