Now We See Who Wants To Shut Down The Game 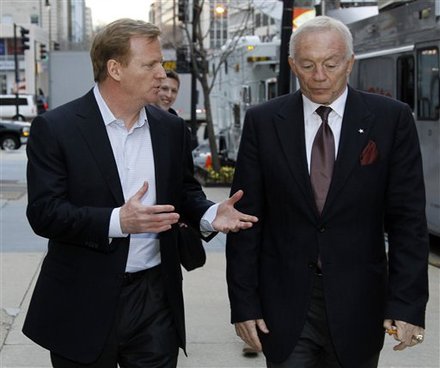 The NFL owners have been exposed. There’s only one side of this battle that wants to shut down the game and aren’t willing to go provide football to the fans and it’s the owners. Where’s NFL Commissioner Roger Goodell when you need him? He scolded the players for wanting to go to court, but you don’t hear anything from him when it’s the owners who want to go to court.

Judge Susan Nelson’s decision to give the players an injunction to stop the lockout has exposed the Commissioner and the owners. I thought he wanted to have football.

NFL spokesman Greg Aiello wrote in a public statement, “We do not intend to start the league year until we have had an opportunity to seek a stay.”

That means they don’t want to provide football to the fans. Remember that these are the guys who wanted to shut the game down for two years.

Wasn’t Commissioner Goodell supposed to be the guy who was on the side of the fans and wanted to provide football for the beloved fans? Why isn’t he scolding the owners for first of all deciding to deny the players entrance to their facilities on Tuesday morning, now the teams will let the players stand around in their facilities but they have informed the coaches not to talk to them.

What is that all about? Why isn’t the Commissioner scolding the owners?

He had tried to come across as being an independent Commissioner who was above the fray. He was supposed to above the fight, but he’s not and I understand that, but he should stop the act. He’s being paid by the owners and that’s why he wouldn’t dare say anything negatively about the owners (his bosses) in the public.

Again, I understand that, but stop lying to the fans, Mr Commissioner. If somebody was paying me $11 million dollars a year I would be following their orders as well.

Could Juan Rivera Be An Option At The Deadline?

wait a second G ,he is not making 11 million . he is only making 1 dollar! or does this ruling re instate his salary. after 5 weeks things are tightening up around the goddel house.

This does not surprise me. Its all about the money to them. I hate David Stern but I gotta give it to the man when he said the lack of the owners not feeling urgent enough to get a deal done early caused this mess. They will lose the appeal and we can all get on with football.

goodell is a puppet, a wuss! He makes me sick the way he talks so gingerly and proper. He’s a hypocrite mired by the bureaucracy of eye sagging skeleton looking scotch drinking stinking cowboy redkneck owners like jerry jones! He should be fired from his position immediately! bitch has no balls!

Let’s not forget G is a player at heart so there is a natural bias. It’s best to hear both sides of the story, and then form your own educated opinion. Here is the other side of the story.

Gcobb, I feel you wrote this with your emotions then with a clear-cut mind. The fact is that the current players in the NFL also don’t give a damn about fans that watch the game. Yes, they want to get on the field…because they need to get paid and playing is the only outlet that gets them their money. If Judge Nelson had ruled in favor of the owners, one is very stupid to think the players wouldn’t have done the same and filed their own appeal. My point is the only person that has actually thought about the fans up to this point is Judge Nelson. Owners and players have both thrown the fans(who make them that 9 billion) to the curb throughout this entire process so that they can add a lil more millions to their bank accounts.

I wish I could feel the same optimism that you felt once you heard Judge Nelson’s ruling but in my mind nothing is going to happen before the draft. I don’t see the eagles or any other team signing players or trading players before the draft. On another note, I do feel more confident that there will be football next season. It was getting to the point where I really thought the season was over but with this ruling an agreement will most likely come in time regardless of who wants it or not.

GarryCobb, great article. These owners have taken this way too far. Judge Nelson ruled in favor of the players hands down… the nfl gotta be annoyed with this. They’re being abused by the nflpa

G, good point about the owner ridiculing the players over wanting to take it to court now they want to keep the players locked out and to go thru the court system, they’re hypocrites and have a double standard. I’m happy for the players. Now hopefully the birds will get Nnamdi and another 1st round pick

Come on G, your bias is having you jump the gun any chance you can attacking the owners without even thinking.