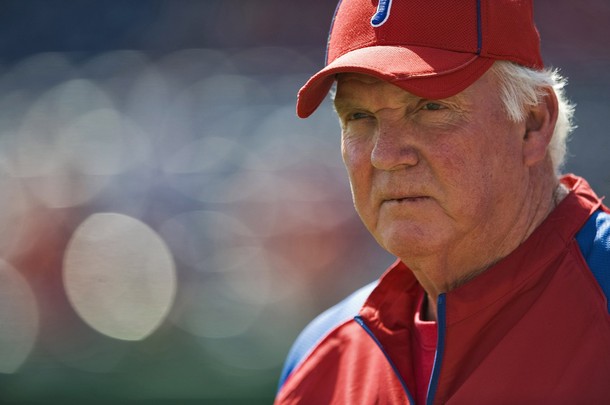 Phillies manager Charlie Manuel isn’t a happy camper nowadays. His top closer Brad Lidge has been out since the season started. Now his second guy, Jose Contreras is down.

Phillies General Manager Ruben Amaro Jr. was asked about the injury suffered by Contreras and you could have taken his words to mean that maybe the reliever was overworked.

“He had been pitching quite a bit,” Amaro said about the veteran reliever.

Amaro continued: “I think it was just the work that he’s done. He didn’t indicate it was one pitch, just over time, especially after his outing on Thursday.”

The GM tried to clear things up earlier today.

When Charlie was asked about Amaro’s comments, he hit the roof.

“I feel like, first of all, that there’s no way in hell we overused Contreras. That’s how I feel. There’s no way. What did he pitch? The most games was three. Then he had a day off. He pitched five times in seven days. We weren’t trying to stay away from him. He was closing games for us. That’s how I look at it.”

“I don’t think he had been used a lot,” he continued. “Really. What’s today? April 25? It’s April 25 and I already hear our guys need days off. Guys need this. Guys need that. I’ve been listening to that for about four or five years now. The object of it is, like I tell our guys in the meetings, the brass, the object is for us to win the game. Every day we come to the ballpark, that’s the object, to win the game. Now do you want to win or do you want to lose? To me, I want to win so I’ll put the best team I possibly can on the field that day. I’ll give you days off when I think so. That’s part of my job too. If I’m going to be accountable for my job then you let me do the whole thing. You basically let me do my whole job. I don’t need nobody to tell me what to do and how to do it. It’s up to me to do it. That’s how I look at it. If you want to talk about it and say something about it, that’s fine too.”

Charlie still hadn’t said everything he wanted to say.

“We still have to play the game the right way,” Manuel said. “Over the years I get tired of hearing people say we want him healthy in October. October is a long ways off. It’s April 25. A lot of time, hell, there’s a lot of people that aren’t going to make October.

Now We See Who Wants To Shut Down The Game

No a good sign, GM And MAnager need to get and be on the same page..
Contreras is a big-boy and if his arm feels tired, he should tell his Coaches but 1 thing you can never be sure of with Cuban Players is their age.. They say he;s 39 but he could actually be 42-44 years old.. Maybe Donald Trump can get Cuba to release his Birth Certificate to prove his age… but the bottom line is as you get older, your arm is not going to respond back as quicklly which is why he should be used in with others in the closing role until Lidge returns and not solely handle the role by himself for Contreras can’t pitch 4-5 days a week all season long at his age… (at least effectively..)

There goes Paulman with his racist banter again.

Amaro seems to be looking for a way out from the fact that he did nothing to shore up the bullpen. He waited on an unhealthy Lidge and then the other option is a guy that gets overworked in April. The manager has to be able to use his players and 3 days in a row for a closer is not a lot. Every other team in the league would do the same thing.

I think this goes deeper than pitching, I think that Amaro is smelling himself a little and may want to move Charlie Manuel, I don’t know why but flags went up when such a simple deal to bring Chollie back seemed to drag along. LOL @BirdoBeamen.

This site is a joke. When did Charlie Manuel become a Phillies “owner”?

Walken, when was this site not a joke?

I take offense to the tone of this conversation…

paulman, why don’t you check his teeth and get back to us on the age question

This “Phillie Lite” batting line-up and Bullpen will be their downfall, They have gone almost 2 weeks without scoring more than 4 Runs in a game..
This is about what I expected out of this 2011 Phils Team which is a damn shame for the Starting Pitching they have, but this lack of power and runs by this Phils Offense and now a shaky and injured Bullpen will keep teams close and blow games that have wasted good Starting Pitching performances.
Hopefully they get Utley back and who knows if OF D Brown can come up this summer to give the offense a jolt, but as it is, both J Ro/Ibanez can’t hit of get around on Major league Fastballs anymore…

birdo, it is your turn.

To Birdo,
It’s true, all Cuban Athletes, are actually 4 years older than they publicly say…
Fidel Castro uses 1 “Notarists” (his Aunt Bebe) in Cuba to fudge all the Birth Dates of all potential athletic kids… I read it in my “Farmers Almanac”