Roseman: Eagles Were Impressed By Jimmy Smith & Are Willing To Take Chances 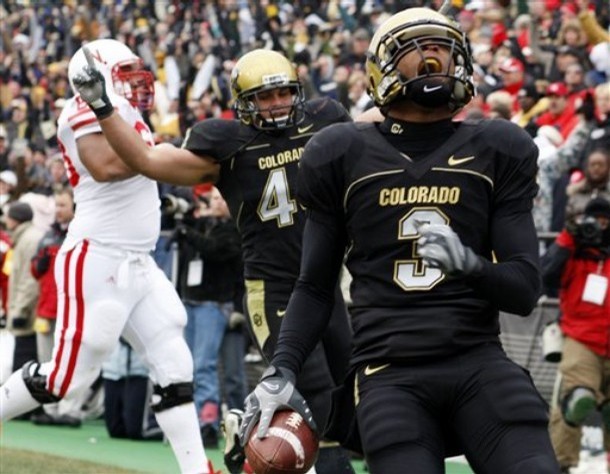 Eagles head coach Andy Reid and the Eagles were able to take a guy like, Michael Vick, who nobody else wanted and help him turn his career around. Of course we all know Vick’s bad track record in Atlant, but the Eagles took a chance on him and it worked out. Will Reid and the Eagles take the same chance with Coloroado cornerback Jimmy Smith?

There are others who are comparing him to Pacman Jones, who was a walking, talking headache for all the teams who made the mistake of acquiring him.

Coulld you imagine what a shut down corner opposite of Asante Samuel would allow the Eagles to do? They could blitz any time they wanted to do so. They could put pressure on the quarterback and dare teams to pick their poison. Do you throw at Samuel or at Smith?

I listened to Eagles General Manager Howie Roseman on the radio yesterday and he made it a point to say that the Birds were impressed with Smith when they spent time with him. He said the Eagles weren’t down on him just because other teams in the league were.

Roseman said Smith did and said everything during their time with him, which impressed him. He was very clear about the Eagles being willing to take chances in order to get better when that move was appropriate.

It sounded to me like the Birds would draft Smith if he’s there when they pick at 23. I think the Eagles are going to be open to moving up or moving down depending on what the deal is. I could see them moving up if they’re able to get one of the marquee cornerbacks.

For instance, I think they would open to moving up, if Nebraska cornerback Prince Amukamara or Smith fall past the 14th or 15th position in the draft. I’m not guaranteeing that they will but I think it’ll be looked at seriously as an option.

Iguodala Misses A Chance To Make Philly Love Him

the Eagles might need to move up to grab him….rumors are teams like Detroit and Tampa are also interested…. Smith could be the best CB in this draft…Peterson will eventually be a FS and Prince is overrated.

I agree Garry, the birds WILL NOT BE DRAFTING AN OLINEMEN IN THE FIRST ROUND. Quote me on that. Oline isn’t a pressing need. Corner is. LB is. DL is. SS is. And a kicker. I think they will look CB first then DL. If Bowers starts to slide don’t be shocked if they trade up for him, noway you can pass him up. but I like Jimmy smith too so they have a tough decision… either way id go corner first bc its what we need the most…

After Peterson, Prince and Smith, the CB situation is bleak…. the rest of the bunch are 3rd-4th round value guys. The DL and OL positions are deep and can be addressed in rounds 2 & 3…

I agree jott, they gotta shoot for 1 of the top 3 corners… they can’t afford to try anf address corner in FA, if they could get peterson id flip out but smith is probably just as good… they need another LB too, akeem ayers is a player they could go for in round 2

I ll say this though, if bowers begins to fall and all three top corners are gone I think they may trade up for him… at 1 point they were saying he could be picked 1st ovr but bc of the injuries he may slide into the teens or twenties

paul, you’re trippin – the percentages of teams that will consider #23, a third round pick and a 5th, enough to move up to #6 is a whopping 0. That’s not enough collateral to move up from 23 to 6. That’s the thing I think many aren’t taking into account – there’s a value formula that teams use for picks. The Eagles (without the Kolb thing…) don’t really have the abililty to trade up that high.

The Eagles moved up from #24 to #11 last year for a 1st and 2 3rd Rounders
You are right, it would definitely take higher picks to go this year from #23 to #6 (Probably a 1st/2nd & and 4th or even a 1st/3rd this year and a 1st or 2nd in 2012) Wonder if the Eagles would give that much up… I still think they will address the CB position via free-agency whenever there is one)

Paul, that’s the thing, I think it’s 100% impossible for them to break the top 10. I think when there was still hope for a Kolb trade before the draft, we all started thinking about drafting high. But I say if we trade up it’s only in the mid teens range. And I’m NOT predicting that they are likely to trade up…

I also think there is no way the Eagles can move up to #6 in the draft based on what Paul has them giving up. If Cleveland would go for it I would jump all over it but I don’t see that happening. Assuming that it would take this years 1st and next years 1st along with maybe a 3rd rounder this year I don’t think they will do it…even though there is a good chance we trade Kolb (when player trades are allowed) and have two 1st rounders next year, I don’t think the Eagles are willing to give up that much.

Also, if Peterson is still available at #6 the Browns will be fielding calls from more teams than just the Eagles. This will drive the price to move way up. The Patriots could trade up for him and they have much more to offer in the draft this year than we can.

“OLinemen isn’t pressing need?” Thanks for the laughs.

I dont think Sash would be a surprise. Id welcome that addition.

@runtheball, what you think they need a RG? RT? Well guess what they won’t be taking either in the 1st few rounds if any, I’m not all the way convinced that they really wanna draft a olinemen… your dealing with a very arrogant cocky brass that things there way is the right way, they’ve invested in the oline the past few drafts and trades and FAs, fot a new oline coach one of the best in the history of the nfl… he ll correct a lot of the mistakes… maybe they could try to acquire a RG…

Sash is a very good player and would be a great fit for the Eagles D..
A tough-nosed hitter who is very sound fundamentally.. He and Allen could make a great tandem for the next 8-10 years.. Sash play down in the box and do the dirty work while Allen plays Centerfield and make plays and int’s in the passing game…

But I don’t see it, I could be wrong though…they have other more pressing needs at LB CB SS DL K

j hart – how have they invested in the oline in the past few drafts? You got examples for that? I don’t think they have.

And, seriously man, do you really think that there’s ANY brass that thinKs their way ISN’T the right way? That’s just silly

I definitely see a OL added and Needed
Reggie Wells, Nick Cole and MJG are all Free-agents and chances are is that only 1 will be opfferend a contract and return (my $$ is on MJG)

I like the Eagles selecting OL James Carpenter from Alabama,
Will Rackley from Lehigh, CLint Boling from Georgia in the 3rd Round
and then adding a OT prospect late in the Draft..

2010 was actually one of the only years they didn’t draft a olineman. Why? Bc they were comfortable with the players they had in place. They signed peters, they got mcglynn, they have herramans, they drafted justice a few yrs back… there issue came when jamaal jackson went down. Everyone is healthy right now and ready to go

One thing reid has always done is he’s always put together a quality oline so noone should doubt him there.

Some more guys I remember they did acquire for the oline:

“One thing reid has always done is he’s always put together a quality oline so noone should doubt him there”, haha whose hitting the bottle now, ask Kolb and Vick about that quaality o line last year, Kolb still pulling grass ou of his helmet

j – McCuller and Duncan never made the team. Yeah, there were Olineman added for depth in training camp,and backups. But I think it’s safe to say that when people predict or want OL draft picks, its to start, not try to make the team or be a marginal backup…

jakedog, change your name to maddog cuz that’s what your sipn on…. you can split the blame from the qbs not getn the ball outta there hands and not understanding blitz schemes,from the olines lack of durability to the wr not getting open, they blame can be thrown a lot of places… but one thing that is fact is andys expertise in the oline department… he’s always had strong olines… last yr was a wash, when healthy that’s not them

They seem to like austin howard a lot, let’s see what he can do… again there oline isn’t crappy by any stretch like everyone on this site tries to insinuate they needed to get healthy and now they are

When your offensice scheme is to have 320-330 lbs OL drop back and pass protect 40-50 times a game, they are going to get wooped out and tired and then can’t sustain blacks late in the game or struggle in red-zone short yardage situations which has plauged this team for the last 10 years and don’t give me stats that they were better in short-yardage situations last year and the only reason why is that QB Vick has lots of QB keepers in those situations which is stupid to do and only adds to amount of hits and potential injuries that Vick will get.. Have a real short-yardage running game and scheme and you won’t need to run high-school QB Keep plays..

neither vick or kolb felt comfortable with the swiss cheese line, pressure early on paulman, vick running for his life, kolb a human chia pet, line has not been good since days of paulbunyonrunyon and tra thomas,

Maker’s Mark & Wild Turkey 101 are some of my favorite Bourbons..
(can you say that on here..)
I think I can say for the record that the first time I puked after drinking alcohol,
when I was 13-14 was after drinking MD 20/20 that one of friends had taken from his fathrs liquor cabinet, during a sleep out many years ago ..