The Sixers Showed Plenty Of Promise For The Future 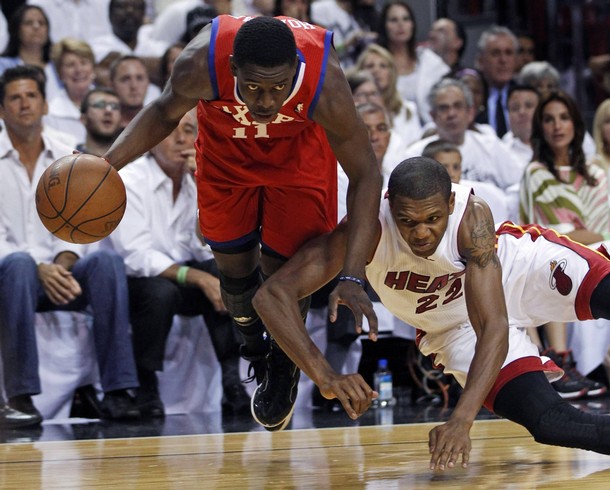 Sometimes it’s a very hard task trying to discover the good in something, when the ultimate goal was not reached. That’s not the case with the 2010-11 Philadelphia 76ers. Even though they weren’t able to pull of an upset and defeat the Miami Heat, they provided a lot of hope for the future with their performance.

Yes, this team is a few years away from being a true contender, but they are much better than either of last two Sixers teams to make the playoffs. This team is more mature, and has shown they understand the game. They fought to the very end, even when the chips were against them, they still fought.

I must admit when the season started I was one of the millions of Philadelphia sports who hoped they would find themselves in the lottery again. I wanted them to get the best center they could get and just allow the young talent to grow together.

I felt that trading Andre Iguodala was a good idea, and would’ve welcomed his replacement with open arms. However, after hearing Sixers head coach Doug Collins reiterate how this season was all about gaining experience and growing together, I changed my mind.

The experience the Sixers gained by playing against the Heat, and how close they were in almost all of the games is priceless. Guys like Jrue Holiday, Jodie Meeks, and Evan Turner now know what it’s like to play in the playoffs.

They now know what it’s like to go in to enemy territory and deal with a rowdy crowd. They experienced the joy and satisfaction of actually winning a game in the playoffs.
Hopefully after getting a taste of the playoffs, they’ll become greedy and want more.

Guys like Iguodala, and Elton Brand showed leadership when it was needed. Say what you want about Iguodala, but that guy showed he has heart. He may not be a closer like some want, but he is one of the best defenders in the NBA. It’s amazing how well he was able to play defense in the playoffs, despite being hurt.

Coach Collins was magical this season. You almost forget that they started the season with a 3-13 record. He had his troops ready to battle the Miami Heat every game, despite being over matched. The fatherly approach he took with the players really worked. They trusted him and he trusted them.

The Sixers had a good season and followed it up with a valiant effort against the LeBron James, Dwyane Wade, Chris Bosh and the Heat in the playoffs. It’ll be interesting to see what they do next.

My guess is that they’ll ride this momentum into their summer workouts and come back ready to show this season wasn’t a fluke.

Collins And The Sixers Went Down Fighting

Nice article John. One thing that comes to mind when comparing John Wall to Evan Turner is that we have a better coach, Better players and we have gained experience unlike John Wall. In his career he may never make the playoffs.

I think watching Turner play gave us a sign of things to come from him. This offseason they will work on his jump shot and place him as a starter for 2011-2012 season. This leaves Jodie Meeks either being traded of coming off the bench.

I think its important to leave the chemistry we have to stay by bringing in players that are athletic. Spence Hawes will not be back because he does not fit into what we do (run up and down and defend)

Andre is a “nice” player. he Would never be more than the 3rd or 4th option and level of importance on a championship caliber team. So please, enough with the Iguodala praise. The biggest mistake was made by Ed Stefanski, who just gave him 23 million more than he was offered the previous year for some unknown reason. He must go so Evan Turner can develop.