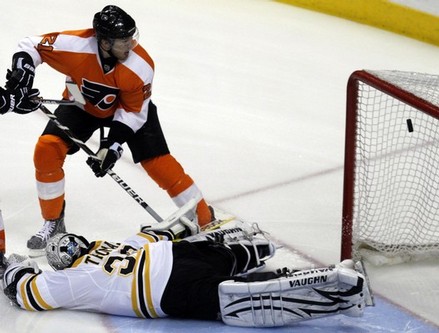 Fifty-four shots on net sounds impressive, but the Flyers will still head to Game Three against the Boston Bruins down two games to none.

James Van “Ridiculous” put the Flyers up 2-0 early in the first period with an even strength goal and a powerplay goal. JVR would, in fact, finish the game with the most minutes among any forward and the second most shots on net for the Flyers. He was, without question, the best player on the ice among both teams. Unfortunately, he couldn’t carry the team the rest of the way despite his best efforts.

As with Game One, the offense wasn’t all that bad tonight. The powerplay looked decent, the shots were there, but goaltender Tim Thomas took away all the easy goals. At the other end of the ice, Brian Boucher will be getting a lot of flack from the fair-weather fans, but he was as good as could be expected from a Philadelphia goaltender these days.

Chris Kelly tapped in the first goal from the Bruins with traffic in front of the crease. It was a breakdown of the defense that didn’t clear the garbage in front of the net. Brad Marchand scored the second goal for the Bruins minutes later. I will grant you that Boosh could have done a better job of tracking the puck, but the blame still needs to be shared with the defense.

Bruins defenseman Adam McQuaid left the game before the end of the first period after trying to elbow Mike Richards in the head, missing, and then awkwardly hitting his head into the boards. McQuaid is currently in the hospital and will likely be out for some time. I hope Philadelphia fans wish him a speedy recovery despite the jeers that I heard from a few individuals.

The Bruins and Flyers traded pressure back and forth in the beginning of the second period. Boucher left the game after taking a shot from Johnny Boychuk awkwardly into his left hand and was replaced by Sergei Bobrovsky. Bobrovsky looked decent in relief, but the game could have easily gone in the Bruins’ favor if David Krejci hadn’t hit the post on a wide open net.

Johan Backlund dressed in case he needed to back up Bobrovsky, but Boucher was miraculously back in time for the third period. The Flyers dominated the period, but couldn’t solve Thomas or the Bruins’ defense. They also failed to convert on two crucial powerplays against Marchand and Zdeno Chara.

The Flyers were credited with 33 hits compared to the Bruins’ 18 after the third period, but that was likely the home crowd being a bit generous with the counts. At this point in the game, the Flyers were pressing and keeping hope alive.

Unfortunately, a turnover from Braydon Coburn and Kimmo Timonen  led to Krejci open, AGAIN, in front of the Flyers’ net with all the time in the world. A quick wrister later and the game was over.

Actually, it took about an extra thirty seconds because the puck bounced in and out so fast that the referees initially waived off the goal. Much like the goal in Game 6 of the 2010 Stanley Cup Finals, it took some time before fans realized that the game was actually over.

Game Two was a much better effort from the Flyers than the joke of a game they put together on Saturday. JVR continues to be a monster on the ice, and Boucher looked better after the second period. Unfortunatley, the Flyers’ defense failed to put forth as tight a game as the Bruins defense and allowed them too many opportunities to score.

For everyone blaming Boucher for the loss, I ask you to replay every goal of tonight’s game and ask where the coverage was on the shooter. This series is going to require complete coverage for as long as it takes to win, because Tim Thomas isn’t going to give up easy goals, plain and simple.

GCobb.com Writer, Jerry Brennan Appearing On CNN On Tuesday Morning At 9:30am

Grading The NFC East In The 2011 Draft