Andre Iguodala Is The 76ers Version Of Bobby Abreu 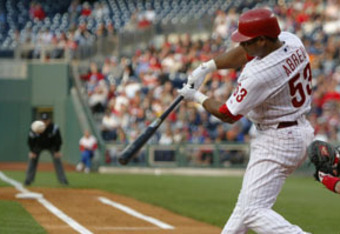 It was 2006, the Phillies were coming off of a 9–18 June, and puttering along the schedule with a .500 July then the team traded its “star” player Bobby Abreu and finished the season 39-23, just missing out on the Wild Card. The trade allowed an unknown rule five draft pick by the name of Shane Victorino to enter the lineup.

Victorino developed into a Gold Glove Major League outfielder and was an important piece of the Phillies 2008 World Series Championship team.

But, what if the Phillies held on to Bobby Abreu for an extra season? Does Victorino gain the same Major League experience coming off the bench for the entire 2007 season? Would he have been ready to take over center field for Aaron Rowand in 2008?

The Phillies realized with Abreu what the 76ers have yet to realize with Andre Iguodala, if the team’s star player is expendable how much of a star player is he?

The Sixers have young talent that is capable of taking over for Iguodala. The Sixers could use that 80 million dollar contract to improve on other team needs such as center and shooting guard.

leaders. It was the catalyst in the Phillies turning into World Champions.

The time to trade Iguodala is now. It is time for Jrue Holliday to become the face of the 76ers franchise. It is time to see if Thad Young can produce as a starter the way he has off the bench. It is time to find out if Evan Turner can handle playing extended minutes and eventually become a starter himself.

Trading Iguodala does not mean the Sixers will win a championship but it could be the spring board to the 76ers becoming a force in the NBA. The Phillies are proof a franchise can change by the method of addition by subtraction.

The 76ers front office has said in the past they will not just trade a player to dump salary, in Iguodala’s case it is a must. No NBA team is going to provide any type of value in return for a 80 million dollar player averaging just 14 points per game.

The Sixers need to do what the Phillies did back in 06 with Bobby Abreu, the Phillies traded Abreu to the Yankees for shortstop C.J. Henry , left-handed reliever Matt Smith, catcher Jesus Sanchez and right-hander Carlos Monasterios. None of those players ever contributed to the Phillies four straight NL East titles.

The move allowed players already on the team prior to the trade to gain experience and develop. Could Evan Turner be the 76ers version of Shane Victorino? Without a trade fans may never know the answer.

Flyers Season Ends in a 5-1 Whimper

Would NFL Allow Eagles & Cards To Make A “Wink & A Nod” Deal for Kolb & Peterson?