Flyers Season Ends in a 5-1 Whimper 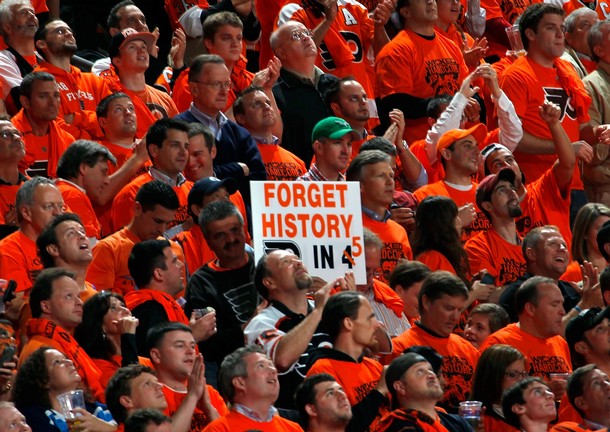 “This is the way the world ends. Not with a bang, but a whimper.” The end to poet T.S. Eliot’s famous poem Hollow Men doesn’t have much to do with the Flyers’ season ending 5-1 loss to the Boston Bruins, but it was all I could think of after watching them bow out to the black and gold.

Even if they somehow managed to pull off a win or two, this team did not deserve to win a Stanley Cup. There was very little in the way of “heart” save for a few individual players and the team had too many deficiencies on the back end.

There was a parade to the penalty box throughout the game that allowed the Bruins to put one past goaltender Sergei Bobrovsky early in the first period. Kris Versteeg tied the game thanks to a breakout play from Mike Richards during a 4-on-4, but that was the only offense that the Flyers could muster to beat Tim Thomas.

The Bruins went up 2-1 after Johnny Boychuk fired a slapshot from a distance. It seems that long shots are Bobrovsky’s Achilles heel, based on his performance over the course of the season. Matt Carle turned the puck over late in the third period and Milan Lucic closed the door on any “comeback” talk.

Matt Carle has basically traded himself away after his performance in the 2011 playoffs. I don’t dislike the player, and there are few free agents his age who the Flyers can aim for in the offseason, but his $3.4 million salary would be better put to use on a bonafide goaltender.

If there’s anything that Flyers fans can look forward to, it’s the continued development of James Van Riemsdyk and Sergei Bobrovsky. Bob was the biggest surprise of the regular season while JVR took the NHL playoffs by storm. Unfortunately, the Flyers once again have no worthwhile draft picks and so we have to hope that the recent college signings will pan out better than the previous college signings.

I can’t speak for the rest of Philadelphia, but I am rooting for either the Tampa Bay Lightning or the San Jose Sharks the rest of the way. It’s about time that either Simon Gagne or Antero Niittymaki hoist Lord Stanley.

Andre Iguodala Is The 76ers Version Of Bobby Abreu

Such a disappointing end to a great season. Its time to bite the bullet and a trade one of our big guns to get a seasoned vet between the pipes. With recent emergence of JVR it should allow the Flyers to offer someone up in a trade. Over the years the Flyers have had better luck bringing up goal scorers rather than goaltenders. Its time to give one up and get what the team truly needs.

About what I expected.. The Flyers were just not as mentally strong this enite Playoff Season for some reason.. Maybe all these line-up changes down the stretch and in the playoofs had players playing less than 100% COnfident, the issues and flip-flopping with the Goalies was a joke and reminded me of Pee-Wee Hockey Coaching.. but in the end, there was a bunch of players who did not play at a high level consistently during these playoffs which is a must.. When you are pudhed and have to go a 7th Game versus the talent-poor Buffalo Sabres , you know as a team that your not playing well…
Anyways, here is a list of players who not only disappointed, but need to be moved this off-season
Jeff Carter, C Versteed , Garcillo, Matt Carle, The Flyers need to obtain a Top Goalie, add 2 good Defenseman and another scorer…
Where was Claude Giroux these playoffs, he was a non-factor and D Timomen who is usually very strong, did no look his best..
How much can the Flyers count on a aging C Pronger whose best days are clearly behind him..
In the end, it was a dissapointing end to the season, getting swept in any playoff in any sport is a little embarrasing and should be humbling to the Flyers Organization ans their players and coaches and can maybe use this empty feeling to motivate them to play better next Season..

giroux had 1 goal and 8 assists in the first round (or something like that, so he was there. the rest of the defense turned in a pathetic showing, which is scary, because that was one of their strengths all season long.

The Goaltending #’s ranked 2 from the bottom in Overall Stats.
They gave up the most Goals (36) and ranked 2nd from the bottom with a poor GPA/Save % off all 16 Teams that made the Playoffs (outside of Phoenix) .. Yikes..

Richards, Hartnell and Carle all need new addresses this offseason… Rip the “C” from Richards chest and give it to Giroux…its his team now…. he and Carter can lead the Flyers… work a deal to acquire a top goalie in the 25-30 age range with Richards headlining the deal….

I think there will be lots of changes–
How much does Pronger have left in the tank, Timonem..
I would go young and get rid of some of these older,higher-paid players who are past their primes.. I expect them to have a couple 86-90 point Seasons where they end up as 6th/7th/8th Seeds for the next couple of seasons which really does not mean much since it’s really how you are playing those last 20 games of the Season leading into the Playoffs that are the most important and then once the Playoffs arrive, anything can happen but it’s critical that the Coach and Team have settled on a #1 Goalie down the home stretch and then in the playoffs, you cannot play “Goalie-Roulette” at the NHL Playoff level and expect to to go very far..
Get rid of Carter, Shelly, Garcillo,Zherdev,Hartnell, M Carle, Boucher & Leighton, and maybe Versteeg who was very disapointing since the Flyers picked him up.. I thought he was going to be a stud..

Flyers need to trade Bobrovsky, Richards and look for a young goaltender.

I personally would like Jon Quick, Luongo or maybe take a chance on Nabokov.

They need to address the defense and blow up this underachieving team.